The work by Vida Lahey (1882-1968), one of Queensland’s best loved artists is widely admired for her watercolour floral studies, however in Morning light, Brisbane River c.1925-30 Lahey has beautifully captured the effects of light on water, and also provides us with a little mystery which you may be able to solve for us, let us know what you think in comments below.

Bright light, excellent tone values, and joyous colour are characteristics of Miss Vida Lahey’s exhibition at the Fine Art Society’s gallery, Exhibition street, Melbourne. Occasionally one or two of Miss Lahey’s works have attracted notice, but this is the first time we have seen her latest work in the mass. Painting against the light has an attraction for this artist, and some very successful results are achieved… There are also some brilliant sketches, of which “Morning Light, Brisbane River” is a gem… Miss Lahey is a Queenslander. She has caught to perfection the semi-tropical light of Brisbane.1

Although the play of light in the sky and on the water is the principal subject of Morning light, Brisbane River, we are always interested to discover the exact location of a painter’s vantage point. The only clue is the white, red-roofed building in the upper right of the picture. It suggests a Spanish mission revival-style church, and due to its proximity to the river, Our Lady of Victories Catholic Church on Roche Street, Bowen Hills, is a likely candidate. Designed by prolific Brisbane architects TR Hall and GG Prentice during the 1920s and built as a memorial to the Catholic soldiers who served in World War One, the church would have been a fresh subject for Lahey’s brush. If this is the correct building, she was likely painting across the river from Newstead House, Hamilton.

It has also been suggested that the building is the old Sea Foam Flour Mill on Stanley Street, South Brisbane. It was demolished in 1981 to make way for the redevelopment of the precinct, which later became the site for Expo ’88. By the time of its destruction, the mill’s painted surfaces had long since eroded, making the pristine red and white that Lahey depicts a distant recollection indeed. If this is the case,  her view would have been from the city side of the river, downstream from the Victoria Bridge.

However, the mystery might somewhat be solved with the uncovering of this review from 1934, do you agree?

The Brisbane River presents infinite opportunities to the artist who seeks to depict with line and brush its varying moods, and the inspiration which Brisbane artists have found in the calm, mirrored beauty of the upper reaches of the river and in its crowded lanes of shipping is given satisfying expression in a splendid collection of etchings, water colours, and oils at the Gainsborough Gallery, Bank of New South Wales Chambers. The exhibition includes the works of such well-known artists as Vida Lahey… Each of them has seen the river from a different point of view, has succeeded in capturing a different impression and interpreting it in terms of colour and tone — an endeavour which constitutes the principal difference between the painting of a picture and the taking of a photograph.

The high quality of Miss Vida Lahey’s work is well known to the discerning public, and she has five happy river and riverside scenes, which are most satisfying in their treatment. The view of the Hamilton Reach is in excellent study in perspective and the contrasting blue of water and sky. In the foreground the rippling wake left by a motor launch, a receding speck in the distance, is admirably depicted.2

Our Lady of Victories Catholic Church

View across the river toward Newstead House 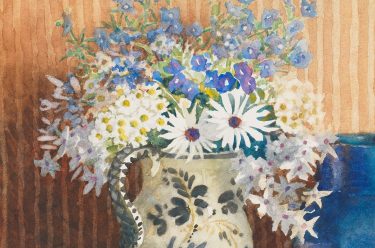