Watch our time-lapse as Ben Quilty draws portraits of Margaret Olley on the wall of the Gallery of Modern Art (GOMA). These large-scale chalk drawings are based on preparatory sketches he made for his Archibald Prize winning portrait of Olley. Quilty has cast in chalk some of the objects she gave him over the years; teapots, jugs, and vases, and used these to draw with.

Watch the time-lapse of ‘Margaret remembered’

Ben Quilty first met Margaret Olley after she awarded him the Brett Whiteley Travelling Art Scholarship in 2002. Of course, when Quilty first heard that Olley was going to be guest judge of the Scholarship he was convinced there was no way he could win — his practice was just too gritty and abstract to appeal to Olley’s interests.

Surprised, Quilty struck a friendship with Olley that would endure to her last days. Olley’s mentorship and advocacy certainly bolstered Quilty’s career — and undoubtedly Quilty’s youthful appreciation of Olley’s spirit, tenacity and lifetime achievement was gratifying given her lifelong devotion to her practice.

In 2011, he convinced Olley to sit for a portrait that would win the Archibald Prize that same year. His sketchbook from that sitting has now become the source for a delicate yet soaring wall-drawing that connects these two exhibitions in a tribute to Margaret Olley. 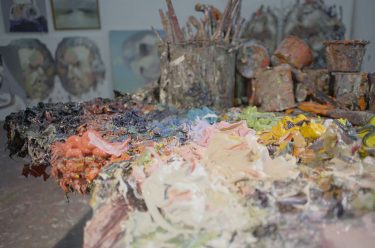