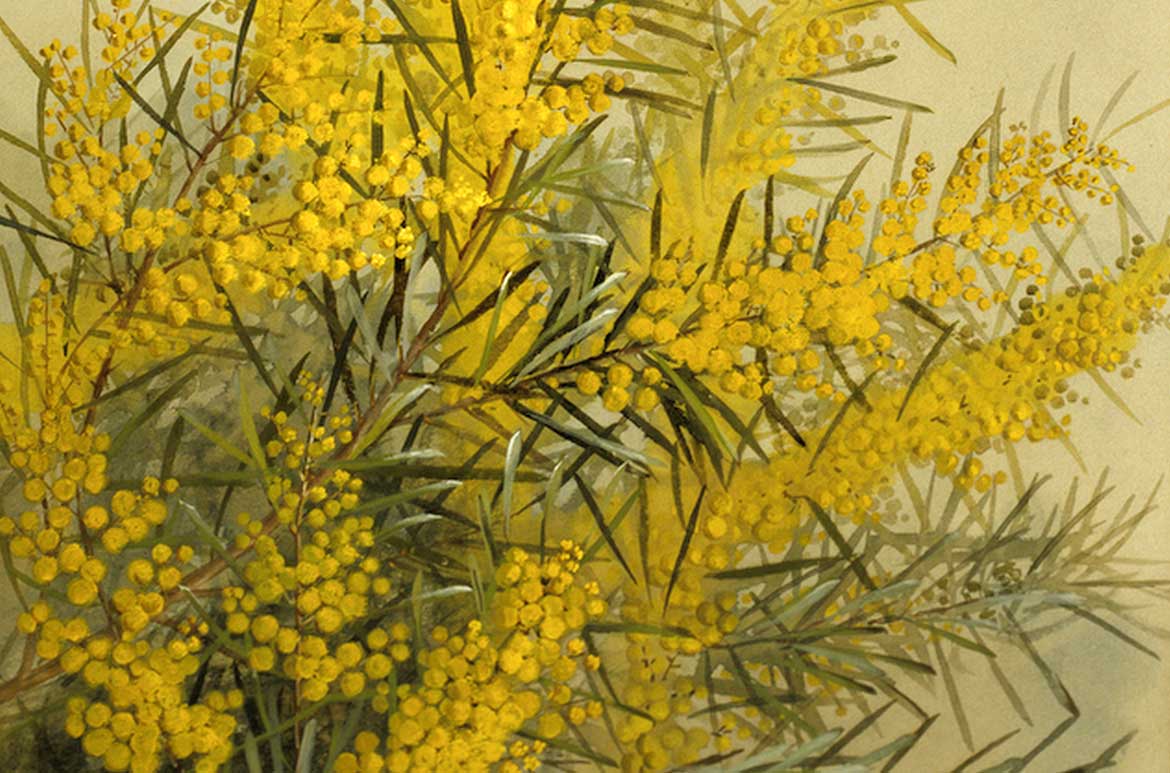 National Wattle Day was first celebrated in New South Wales, Victoria and South Australia on 1 September 1910, then in Western Australia and Queensland in 1912. Wattle had become a symbol of Australian national identity from Federation — becoming one nation — the Commonwealth of Australia, on 1 January 1901. Branches of wattle then featured in the Commonwealth Coat of Arms from 1912 and from 1914 during the First World War wattle sprigs and wattle badges (illustrated) were sold as a patriotic symbol to raise money for the troops overseas and later for women and children’s charities. The golden blossoms, found throughout the continent, even inspired Australia’s choice of green and gold for national sporting teams.

Over time, the date was changed for each state to coincide with the best flowering of their local wattles, with Queensland celebrating in July, however in 1992 the first day of spring for the Southern Hemisphere was proclaimed as Australia’s National Wattle Day.

‘The Queenslander’ celebrates the wattle, 1910

The wattle became a unique preoccupation in the early Twentieth Century for many artists, being a creative inspiration and for events and exhibitions through the Wattle League, with Daphne Mayo (1895–1982) receiving a Wattle Day travelling art fellowship in 1914 while at college (illustrated) provided by the Queensland branch. Mayo was the first recipient of the scholarship from the Queensland Wattle Day League formed in 1912. Illustrator and accomplished botanical artist May Gibbs (1877-1969) was best known for her Gumnut Babies and the Snugglepot and Cuddlepie children’s picture books, however she also created Wattle Babies (illustrated) — ‘cute little rays of sunshine’. Marian Ellis Rowan (1848–1922) is also know for her exquisite botanical watercolours of Australian flora, of which our focus here will be her wattle illustrations.

Marian Ellis Rowan’s watercolours of Queensland tropical flowers and foliage were among her most spectacular and accomplished works and she achieved international significance largely through the botanical studies she produced in the state.

Although not presented in the standard format of botanical illustration with cut away floral sections and detailed leaf studies, her watercolours of plants and flowers are very readily identifiable. Ellis Rowan (1848–1922) known by her middle name, entered into a detailed correspondence with Ferdinand von Mueller (1825–96), the Director of the Melbourne Botanic Gardens, to identify the subject of her paintings. Preferring to work en plein air, many depict the animals and insects associated with them in the natural world. Rowan is now widely recognised as elevating what was regarded as a standard ladies form of decorative painting at the turn of the twentieth century to a more significant artistic level.

The Gallery does not possess an example of Rowan’s wattle studies, however the Queensland Museum has her Queensland watercolours and these document the important influence Queensland had on Rowan’s career over multiple individual visits in 1891, 1892, 1911, 1912 and 1913. In 1912, she exhibited her Queensland paintings in Brisbane and persuaded the state government to buy 125 flower paintings which are now in the Museum’s collection. The Museum through Judith McKay has also published on Rowan — A Flower-Hunter in Queensland (1990).

The Royal Worcester Porcelain Works has from its founding years enjoyed great renown for its production of decorated porcelain. In the late nineteenth century the firm achieved distinction for its naturalistic portrayal of groups of highland cattle in misty landscapes, and studies of flowers and fruit.

In the early 1900s, Flavelle Brothers, well-known Sydney jewellers, commissioned a series of designs by Rowan — one being this wattle design — which were then reproduced on Royal Worcester porcelain by well known china painters in the decorating department at the factory in England such as Reginald Austin, Harold Martin, A Shuck and JW Sedgley.

The earlier pieces produced for the Australian market were notable for their prominent ‘Quaker grey’ borders but as these examples proved expensive to retail they were later replaced with a more simple transfer-printed border. This example bears the printed border and is of special interest to Queensland as it was made for the Brisbane branch of Flavelle, Roberts and Sankey whose premises were in Queen Street.

Eugenia c.1891 is an unidentified Eugenia species (now classified as Syzygium or in common appellation lilly pilly) which is native to Queensland. It belongs to a group of more artistically inclined watercolours as it shows the botanical specimen against a landscape setting of the area where the plant was to be found.

Ellis Rowan had an upper middle-class education, including some tuition in watercolour painting, although she later claimed, with characteristic exaggeration, to have been entirely self-taught. She went on to become one of Australia’s most famous and accomplished natural history artists.

She began to exhibit her large watercolours of native flowers and plants at about the time of her marriage to Captain Frederic Charles Rowan in 1873, mainly at intercolonial and international exhibitions, however she also exhibited in India, England, Europe and the USA and published a number of articles and books, including A Flower Hunter in Queensland and New Zealand (1898). Rowan won ten gold, fifteen silver and four bronze medals, starting with a bronze at Melbourne’s second Intercolonial Exhibition in 1872 and ending with gold at the World’s Columbian Exposition in Chicago in 1893.

John Longstaff’s skills as a portraitist were eagerly sought, he was a five-time winner of the Archibald Prize for portraiture. His painting Memorial portrait of Mrs Ellis Rowan, taken from a photograph (illustrated), was paid for by public subscription after Rowan’s death, the first national portrait of an Australian woman. Interestingly, Longstaff replaced the roses in the reference photograph for Wattle in his painting. 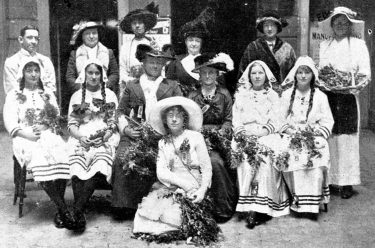