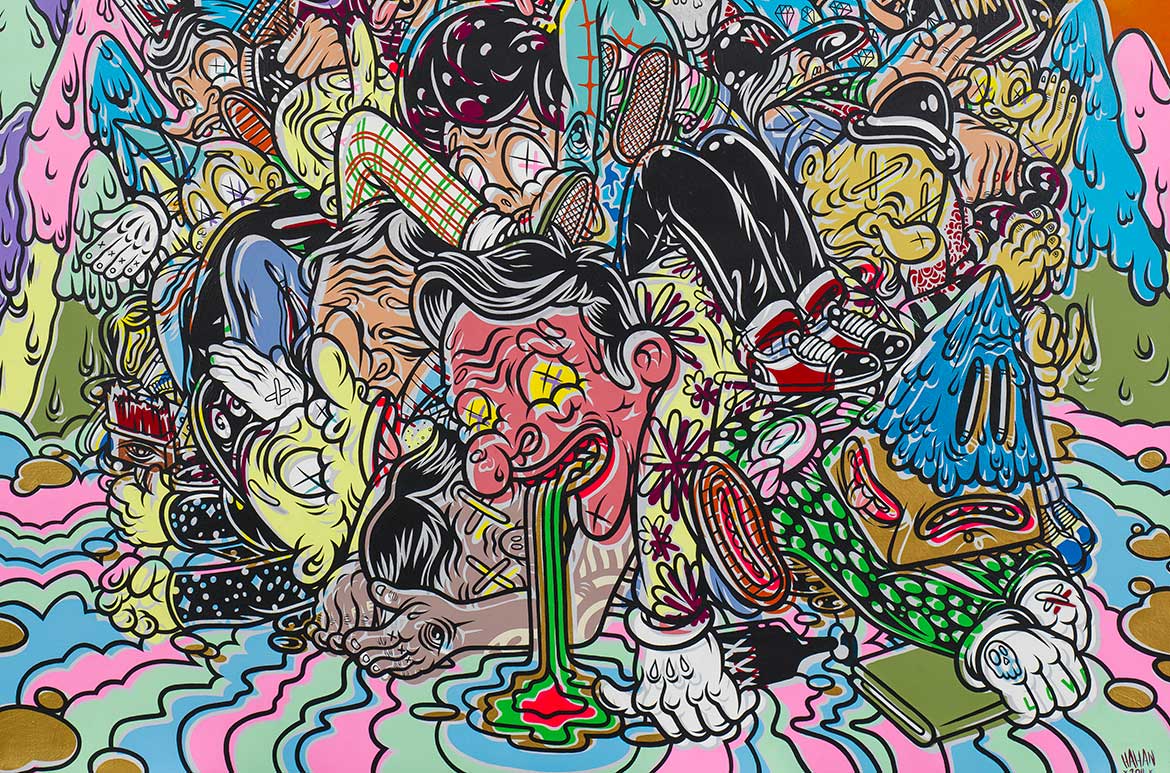 Hahan’s painting Letters to the Great Saatchi confronts us with a mound of art-world caricatures. An unsightly pile of collectors, curators and critics desperately clamber over one another, their eyes scored and blinded with ambition. Spray-paint vomit and slime ooze forth from the human mountain. Yet one figure has clambered to the top, waving a victory flag that reads ‘too much young artist’.

The art world functions upon a paradox in which it hungers for the new and yet circulates around select group of established artists. As with most markets, it favours known entities: those with a long and predictable credit history. On the opposite pole, as Hahan illustrates, is the art world’s fetishizion of young artists, merely for their ability to pump out post-internet, Millennial cool. In this climate, there is at once ‘too much young artist’ and not enough. In other words, there is a lot of hype that fails to translate into real sales, publications or exhibitions.

At the Gallery of Modern Art (GOMA) until August, view ‘Young Ones’, a suite of works by young artists in the Collection. For ‘Young Ones’, I only selected artists born after 1983, making them 35 or younger (this is, I should add, my own generation). The choice to restrict the display to this age bracket poses two questions, namely, ‘what’s so special about being young, anyway?’ and ‘what’s so different about this generation?’

In response to the former, art history has long romanticised youth. Indeed, the trope of the young artist is undeniably old. Eugène Delacroix’s famous painting Liberty Leading the People 1830 is an image not only of revolution but of unbridled youth. Not one old person makes it into the frame; the figure to the right of lady liberty looks at most 14. Here, the dawn of the new political era can only be signified by the young, including the artist himself (who was 32 when he painted the image).

Hahan’s painting echoes (and parodies) this iconic image, drawing out its latent preoccupation with youth. Indeed, the victorious flag of the French revolution in Delacroix’s painting could just as easily read ‘too much young artist’. In a more recent example, the Young British Artists—now middle-aged—founded an entire career on youth.  Like Delacroix’s allegorical figure, these artists were young, determined, and happy to go topless.

Among others, Damien Hirst, Tracey Emin, and Sarah Lucas reframed questions of taste by bringing the grotesque and grotesquely commercial into the space of contemporary art. Here, nineteenth-century Romantics and the YBAs are surprisingly similar. At both points in history, young people (and in particular young artists) become the true iconoclasts, their age signalling redemption in and of itself.

In this way, the position of the artists in ‘Young Ones’ is not particularly special. After all, everyone has been young once; everyone has thought themselves a rebel. What does define these artists, however, is the age in which they grew up and now occupy: their shared generation.

The generation is a category that runs parallel to typical social groupings of class, race or gender. It enables a cosmopolitan Sydneysider and a Mount Isa local to reminisce on the same children’s TV shows; for the son of an electrician and the daughter of a barrister to roll eyes at their parents in unison. Without ignoring the significant differences between social groups, the generational nexus binds a disparate multitude of people.

The problem comes in defining the current generation, now commonly known as Generation Y or Millennials. The last ten years has seen extensive scrutiny, speculation and prophesying about young people. Perhaps the most talked-about feature of the group (in both praise and disgust) is their proximity to technology.

Melbourne-based artist Liam O’Brien has a longstanding interest in this phenomenon, and the way in which it may disrupt our sense of time, identity and relationships. In Domestication, O’Brien passionately kisses a humanoid stack of domestic objects: a partner made from a mop, bin, washing tub, drying rack and latex gloves. Throughout the course of the video, his passion sours into masochism as he begins to stab its ‘stomach’ and devourer its insides. Blurring the distinction between product and person, O’Brien suggests a warped connection between commodity and desire. We might laugh at the artist for loving a collection of objects, but, in fact, objects mediate nearly all our relationships. Texting feels just as natural as talking; our sexual desire is managed in swipes left or right. The consumption of late capitalism has enveloped Millennials since birth; a fact we, like O’Brien in the video, now come to terms with.

In a similar vein, Millennials are accustomed to the political precariousness that has marked the first two decades of the twentieth century.  For us, 9/11, global terrorism and rising nationalism are extensions of history, not news. An easily-forgotten fact, we were not adults when the twin towers hit television screens but tweens and children watching in confusion. What we remember more vividly is the aftermath.

In his photographic series ‘Coming to terms’, Abdul Abdullah restages caricatures of a supposedly malicious and mystifying Islam. Bride I (Victoria) and Groom I (Zofloya) reference Charlotte Dacre’s Gothic novel, Zofloya: Or, The Moor (1806). In the nineteenth-century novel, the Muslim servant Zofloya leads a young widow, Victoria, on a journey of lust, deceit and murder. Although the two never marry in Dacre’s novel, Abdullah depicts the pale-skinned Victoria and her dark-skinned servant as bride and groom. Each figure wears a white balaclava, humorously echoing the various forms of Islamic veil―a garment some have imbued with the same sinister connotations as the criminal disguise. Abdullah’s work reflects the impacts of the ‘war on terror’ whilst pointing to a much longer history of Islamophobia.

For the artist and many young Muslims in Australia, September 11 represents a key moment in their coming of age: a singular childhood event that would forever alter their public image. With a new generation comes a reassessment of history. Abdullah’s work points to how this generation may look upon the politics of their parents with new eyes, seeing the recent past more clearly.

‘Young Ones’ is a display that can only hint at the future of this new generation. Naturally, it captures themes that artists return to time and again, such as Tyza Stewart’s exploration of self and gender, or Vincent Namatjira’s connection to family. However, all these works capture something particular to young artists today. Here we find elements of critique that would not be possible 20, or even 10, years ago.

In only a few years, these artists will no longer be young. In fact, to a fifteen year old, 35 is already embarrassingly old. What will happen to this generation when they are no longer young David but middle-aged Goliaths? Only time will tell, as we await the next tide artists to declare themselves the young ones.

READ more On your AUSTRALIAN COLLECTION, watch our YOUTUBE playlist