The Gallery presents an expansive survey of works by senior Japanese artist Yayoi Kusama, who seamlessly intergrates Pop, Surrealism, Minimalism and psychedelia. ‘Yayoi Kusama: Life is the Heart of a Rainbow‘ is on show at GOMA until 11 February 2018.

In the six years since QAGOMA presented ‘Look Now, See Forever’, Yayoi Kusama’s last exhibition at GOMA, which showcased the most recent developments in her practice at the time, her profile has grown to the degree that she has been proclaimed ‘the world’s most popular artist’,1 and, incisively, the ‘poster girl for the globalisation of contemporary art’.2 Audiences worldwide have flocked her exhibitions, aided by the circulation of simultaneous touring retrospectives in western Europe, Latin America, Asia, Scandinavia and the United States, and the amenability to social media of her particular configuration of space across two- and three-dimensional formats. Kusama’s artistic world, with its seamless integration of Pop, Surrealism, Minimalism and psychedelia, its trademark motifs of nets, dots, eyes and pumpkins, and its psychosexual vocabulary of obsession, obliteration, accumulation, aggregation and infinity, is immensely seductive and, it seems, remarkably attuned to the current moment.

At 88 years old, however, Kusama is an unlikely ‘poster girl’. For all her visibility and marketability, she leads a very simple existence, utterly devoted to art-making. Each morning — weekends included — she makes her way to her studio in a quiet corner of Shinjuku on Tokyo’s west side, where she works through stacks of mail, discusses projects in development with her modest team of assistants, and peruses the art press, before settling down to paint. Kusama prefers to work on a canvas prepared with a single base colour and laid flat on a work bench. She paints intuitively, as patterns and images seem to flow ready-formed from her brush, accumulating in waves across the surface of the picture plane. She often approaches a composition from all sides, so that orientations such as ‘top’ and ‘bottom’ matter less than a general movement from the edge to the centre of the canvas.

There are two painterly projects in which Kusama is currently engaged: the ‘net’ paintings that have figured consistently in her practice since the late 1950s; and ‘My Eternal Soul’, a series of hundreds of uniformly scaled, brightly coloured paintings, executed since 2009. Both bodies of work figure prominently in ‘Life is the Heart of a Rainbow’, a focused overview of more than seven decades of the artist’s practice, produced in collaboration with the National Gallery Singapore. The exhibition builds on QAGOMA’s long engagement with Kusama and the National Gallery Singapore’s sustained attention to modern art in Asia. The exhibition explores the development of the artist’s iconic motifs, her engagement with the human body, and her expansive conception of space as each has developed over decades of art-making. At QAGOMA, ‘Life is the Heart of a Rainbow’ is book-ended by better-known aspects of her work — the lofty, polka-dotted inflatables of Dots Obsession 2017, and the ever-popular children’s project The obliteration room 2002–ongoing, which has now been reproduced worldwide. But so central is the process of painting to Kusama’s artistic production that substantial selections of the net paintings and ‘My Eternal Soul’ works figure in the exhibition. 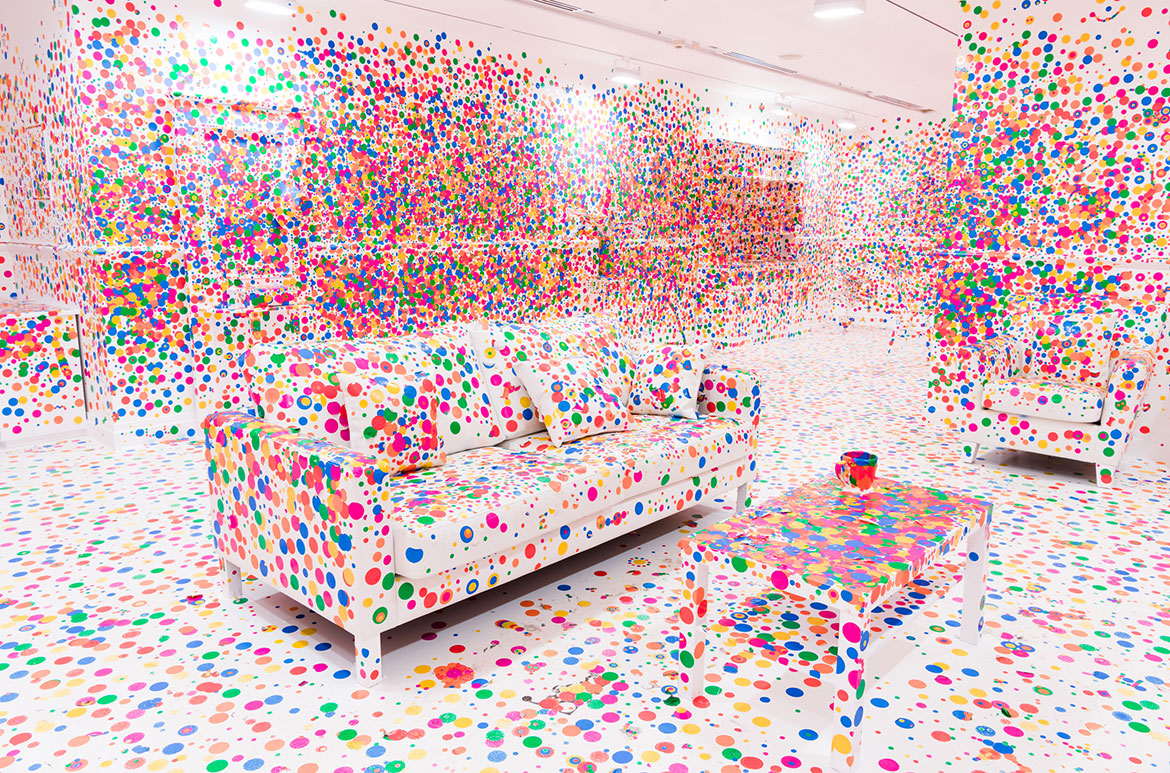 The net paintings developed as Kusama attempted to reproduce her experience of looking down on the Pacific Ocean from the air, during her 1957 journey from Japan to the United States. The nets are made up of thousands of tiny loops painted over a monochromatic ground, which meet to shimmering, undulating effect — the product of an immense labour for the artist as she sits close to the canvas, working with tightly controlled movements of hand on brush. Initially small-sized, their scale expanded dramatically after Kusama encountered the imposing canvases of Barnett Newman and other late abstract expressionists when she settled in New York in 1958. They soon came to supplant her surrealist-inflected experiments as the core of her practice. On their debut at the artist-run Brata Gallery in 1959, the net paintings had a substantial effect and were famously collected by Frank Stella and Donald Judd, who would later become leading figures in North American Minimalism, with which Kusama’s work shared many sympathies. Though she has varied her approach to these paintings over time, they could be considered the backbone of her tremendous output, to which she has returned throughout her career, despite varying her medium from oil to acrylic. This strand of her practice is most highly sought after by collectors, with several record-breaking auction sales over the past decade establishing her works as the most expensive by a living female artist.3

The ‘My Eternal Soul’ series began as a self-imposed challenge: to produce 100 such works over an 18-month period in 2009–10, to be displayed in major projects with Tate Modern, GOMA and the National Museum of Art in Osaka. On completion, she committed to a second hundred, exceeding the target so quickly that she removed the cap entirely. These works are distinguished by their highcontrast, flat colours, and their interplay of abstract pattern-making and recognisable figures, which include faces in profile, stick figures, flowers, and eyes both open and closed. Their colour schemes, composition and pictorial density vary from one canvas to the next, but they have become arguably more sophisticated as the series proceeds and the artist grows more confident with the format. Nevertheless, they are clearly all manifestations of the same project, and when displayed en masse, their interplay of elements creates an encompassing and vibrant visual field.

‘Life is the Heart of a Rainbow’ presents substantial selections from these two bodies of work, such is the centrality of painting to Kusama’s practice. But even within these displays, there is evidence that two dimensions are simply not enough for her artistic ambition, as the stylistic hallmarks of these works move off the canvas to be reproduced three-dimensionally. As early as 1962, Kusama was working in soft sculpture, sewing and stuffing fabric into protuberances she described as ‘phalli’, which she adhered to domestic items, such as clothing and furniture, extending her net-painting approach to physical forms. Later works make this connection literal, such as the descriptively titled Statue of Venus Obliterated by Infinity Nets 1998. The colours and imagery of ‘My Eternal Soul’ have also found their way into soft-sculptural form, in configurations suggestive of alien fauna.

Such organic and biological forms are in keeping with the artist’s long engagement with the human body. The body was a major preoccupation for Kusama in her performance and fashion work of the late 1960s, which is profiled in the exhibition through selected documentation of her live works and public interventions of the period. In the context of the conflict in Vietnam, the artist sought to assert the beauty of the human form, of love and sexuality, against the horror of war, through a series of psychedelic happenings and public interventions. When, after her return to Japan in the mid 1970s, she deepened her psychological subject matter, biomorphic and botanical forms came to the fore on an ever-expanding scale. It was during this time that pumpkins emerged as a major motif in her paintings, prints, sculptures and installations, their bulbous forms appealing to the artist for their suggestion of fertility, abundance, sensuality and individualism. This period of rich experimentation forms the exhibition’s centrepiece, featuring a range of important, if rarely seen, pieces drawn from collections around Asia.

In the early 1990s, Kusama began to revisit a number of pioneering installations she had developed in the mid-1960s, using intersecting mirrors to create infinite reflections. Growing throughout the decade in size and ambition, Kusama’s installations came to realise a conception of space that had only been glimpsed in her paintings and collages; they now enveloped the viewer’s body in an idiosyncratic sensory universe. ‘Life is the Heart of a Rainbow’ features two new versions of important moments from the artist’s development. Revisiting Kusama’s Peep Show 1966, her recent work titled I WANT TO LOVE ON THE FESTIVAL NIGHT 2015 is a hexagonal structured with external and internal mirrors, whose floor consists of concentric ripples of multicoloured flashing lights. THE SPIRIT OF THE PUMPKINS DESCENDED TO THE HEAVENS 2017 updates the centerpiece of her presentation in the Japanese pavilion at the 1993 Venice Biennale — a mirrored cube, the internal reflections of which create the impression of a vast field of luminous gourds. Also included are popular works from the Gallery’s own collection, including the infinity mirror room Soul under the moon 2002, Narcissus garden 1966/2002, installed in the Queensland Art Gallery’s Watermall, and the large sculpture Flowers that bloom at midnight 2011, an acquisition made with the generous support of the late Mrs Win Schubert AO.

Yayoi Kusama first exhibited at the Queensland Art Gallery in the groundbreaking survey ‘Japanese Ways, Western Means’ in 1989, a time when a global reappraisal of her practice was just beginning. Since returning to Japan, her earlier achievements had been overlooked, and the developments in her practice were yet to be seen by the wider world. Over the course of a number of engagements, the Gallery has watched Kusama’s profile grow; ‘Life is the Heart of a Rainbow’ is an opportunity to contemplate the unique and expansive practice of an artist whose commitment to art-making — to realising a singular vision — is tireless.