Once a prominent colonial Queensland artist, Anthony Alder (1838-1915) and his works had all but vanished from public memory until, in 2011, his descendants’ estate was offered to the State Library of Queensland. Here, we reintroduce you to one of his works Heron’s home 1895.

Art history is a process of continually rediscovering the past and reinterpreting it for contemporary audiences. Alder is a significant Queensland colonial artist, apart from being the most prominent taxidermist in colonial Queensland, and widely admired for his dioramas when he entered employment with the Queensland Museum, he was also a painter of substance. Unfortunately, over the years, the appeal of his dioramas was forgotten and, apart from a major painting, Not game 1895, which was occasionally on view at the Museum, knowledge of his work also slipped into oblivion.

Alder was born at Stroud, Gloucestershire and trained in the family’s taxidermy and casting business, Alder and Company, in Islington, London. He spent time working in Queensland from 1862 but returned to England on the death of his father in 1864; after the death of his mother in 1874, he returned and settled permanently in Queensland. Although he did not exhibit with the Queensland Art Society (est. 1887), Alder established a significant exhibition profile. He sought to emulate the work of ornithologist Silvester Diggles (1817–80) (Queensland’s most famous bird painter, who published Synopsis of the Birds of Australia in 1877) and produced grisaille watercolour sketches that were published from 1894 to 1900 in the Queenslander, the state’s most important weekly newspaper.

Alder also produced oil paintings and submitted several of these in what were essentially the first of the Queensland National Agricultural and Industrial Association (QNA) annual exhibitions. He received an award for Not game in the QNA of 1895, from where it was purchased by the state government for the Gallery but is now in the Queensland Museum’s collection, and was also awarded the prize at the same exhibition for Lincoln sheep, homeward Laddie, also 1895, which depicts the renowned stud flock at ‘Glengallan’, just outside Warwick.

A reassessment of Alder’s work was inspired when the work Lincoln sheep, homeward Laddie emerged from the collection of Alder’s descendants and was offered to the State Library of Queensland (SLQ) in 2011. The SLQ has a special interest in ‘Glengallan’, as it holds the archive of the property which was donated by the widow of William Ball Slade’s eldest son, Oswald, in 1958.

At Slade’s time, the property was one of the showplaces of the Darling Downs; the homestead itself, a sandstone mansion built in 1867, was rescued from dereliction and restored as the Glengallan Homestead and Heritage Centre.

Slade called on Alder’s skills as a taxidermist, and this may have been the occasion for Alder to produce the work which, in a sense, is a record of the passing of the colonial squattocracy, as the property began to be broken up in 1895. Large-scale landscapes such as this are extremely rare in colonial Queensland.

Delve into the Collection: ‘Glengallan’ sideboard

The ‘Glengallan’ sideboard 1868 is one of Queensland’s most significant examples of colonial furniture. While the backboard depicts the national symbols of an emu and a kangaroo, the inclusion of the lorikeet and pineapple give it a more local flavour.

The carving is attributed to Matthew Fern, who was appointed the first instructor of wood carving at Brisbane Technical College in 1895. An 1868 press report from The Brisbane Courier records the first showing of the sideboard:

‘It is satisfactory to know that our beautiful indigenous timbers are coming into favour for cabinet work. We had the pleasure yesterday of inspecting [at] Mr. Ebenston’s … a drawing and dining-room suite of furniture, of Queensland woods and Brisbane manufacture and made to order for Mr. John Deschar [sic], Glengallan station, Darling Downs … It is satisfactory to find that our leading colonists are at last becoming alive to the advantages which our local cabinet makers and upholsterers are able to offer them.’

In mid 2011, Dianne Byrne, the SLQ’s Curator of Heritage Collections, advised the Gallery that Heron’s home 1895 was also available to a public collection. It was one of the two works Alder included in the 1897 Queensland International Exhibition (cat.95), and shared the exhibition with Josephine Muntz-Adam’s Care c.1893, the first Australian work purchased by the Queensland National Art Gallery (now Queensland Art Gallery).

Now restored, Heron’s home provides a marked counterpoint in detail and decorative appeal, and represents his skills in depicting natural history subjects — the area in which Alder forged his reputation.

The subject of this important painting is a pair of Nankeen night herons (Nycticorax caledonicus), which are named after the buff-coloured Nankeen cloth formerly produced in the Chinese city of Nanjing (Nanking). These herons are native to large parts of Australia and frequent well-vegetated wetlands, river margins and mangroves around Brisbane. Here, they are depicted in a beautifully rendered naturalistic riverine setting within a larger Queensland landscape.

One of our current projects involves cleaning another work by Alder. Here is a peek at Red-tailed Black Cockatoos c.1895 before conservation. 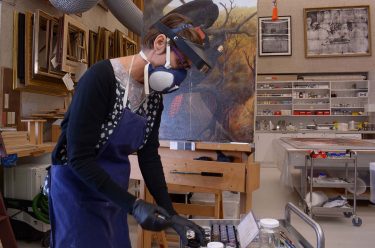