Miriam Prystupa worked at the Queensland Art Gallery from its opening on South Bank in 1982 until 1999. However, she also has a more personal connection to the Gallery, her father Peter was appointed consultant architect liaising between the State Public Works Department and Robin Gibson & Partners on the Queensland Art Gallery’s new building. Miriam was and is still enchanted by the Gallery’s sense of space, these are some of her fond memories…

My history with the Queensland Art Gallery goes back to well before it was built. My father, Peter Prystupa, was consultant architect on the project, involved in everything from the site to interviewing gallery staff and writing specifications for each space, every staffing area. I still have stacks of documents and correspondence that relate the history of this time. Peter was involved with the Queensland Art Gallery from about 1971, which meant that from the age of eleven, I was too. Eleven years later, in 1982, I was on staff when the new gallery premises opened to the public in South Brisbane. Before the doors opened for the first time, I stood with my colleagues, looking at the hoards of people waiting outside, well before opening time, ready to come in. I turned to the woman beside me: “What are we going to do?” Everything was new and we were yet to write the manual. 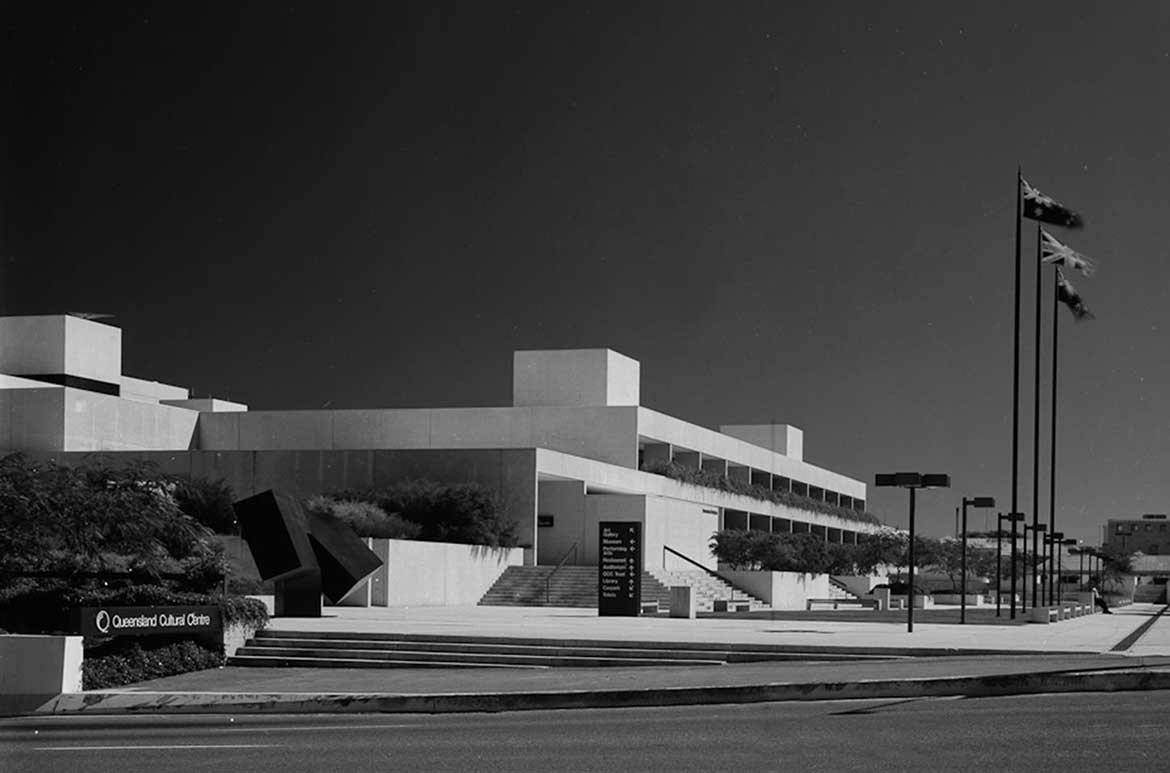 The staff had so much pride in what we were doing and we were a really tight team. I started as an Information Officer stationed in the foyer, the first point of contact. I would see visitors enter, unsure as to what to make of this new building, and leave surprised at their own delight.

What strikes me now is the degree to which Brisbane has transformed since then. The nature of the arts has changed so much, as has the city. In 1982, everything about this building with its modernist aesthetic on the banks of the industrial river looked and felt revolutionary. The national standard gallery aesthetic was temple-like columns carved in sandstone. The Queensland Art Gallery was a visionary building in Australia, let alone in Brisbane. This was when outdoor dining was still banned, before World Expo 88, the date usually cited as the city’s “coming of age”.

The Queensland Art Gallery was designed around the river, which Brisbane had, until then, neglected except as a raw material. Peter writes about the power of galleries to contemplate works of art but also visitors. “The sensitive siting of the Queensland Cultural Centre including the art gallery building, on its banks, makes use of the river’s enhancing and complementary quality.” The water mall inside the gallery (also revolutionary) and its system of internal and external pools and fountains – populated by the well-loved (especially by me) sculpted bronze pelicans by Len and Kathleen Shillam – runs parallel to the Brisbane River. Visitors to the building are offered views to the river from public spaces, which was part of Gibson’s vision for democratic culture. Peter writes, “Gibson loves Brisbane, its people, and the river which played such an important part in the growth of the city… As the first major building on the south side of the Brisbane River, the Gallery established a standard of scale and quality for future architectural development.” This statement remains true.

The best time for me, when I worked there, was after closing time, when nobody else was around. For a few moments I could breathe it all in. Peter described a well designed space as “the most primary and most important element in the hands of a creative architect”. The hands that formed the spaces of the Queensland Art Gallery have given their creative legacy to the city.

When the Queensland Art Gallery reopened its Australian Galleries after a significant refurbishment, I was standing in the space with writer Louise Martin-Chew, admiring their still-elegant spaces, now book ended with Aboriginal art – Emily Kngwarreye at one end and Dale Harding the other. There was movement at the high window that architect Robin Gibson had designed to give people walking the Whale Mall between the Gallery and the Museum a view into this space. I was reminded that this was his version of democracy, giving visitors both inside and out an easy point of access.

I am still enchanted by the Queensland Art Gallery’s sense of space, spaces that are open yet cocooned at the same time. The building engages people in the art through the subtlety of galleries which segue from voluminous to intimate. It has enough nooks and crannies to intrigue but is flexible enough to house the monumental.

Peter Prystupa was born in 1920 in West Ukraine. He was one of many emigres resettled in Australia under the Displaced Persons Resettlement Scheme. He and wife Maria arrived in Australia in 1949 with two small suitcases, one trunk and Maria’s baby grand piano. He was involved in the design of major government buildings in Queensland and was appointed consultant architect liaising between the State Public Works Department and Robin Gibson & Partners on the Queensland Art Gallery building. He was awarded a Trustees Medal for Services to the Queensland Art Gallery in 1982 and was Honorary Curator of Architecture and Design in the same year. He died from Motor Neurone Disease in 1989.

Miriam Prystupa worked at the Queensland Art Gallery in Promotions and Public Programmes 1982-1999. She is the editor of LIFETIDE: Maria Prystupa which chronicles the life and art of her mother Maria (1922-2016).

Louise Martin-Chew is a freelance writer based in Brisbane