Through his art practice, Asim Waqif explores the reuse of recycled materials that are often discarded by the ‘development’ of the city into a public space. It is this throwaway society that is represented in his perspective and also in his APT8 installation, All we leave behind are the memories 2015, a sprawling timber installation across two gallery floors. Here, we provide an insight into the exhibition design processes behind the work.

When I met with Asim Waqif, I was overwhelmed by the sheer scale and magnitude of his installation proposal for APT8. With an architectural background that complimented his ambition and artistic vision to create this extraordinary and gigantic installation work in GOMA’s Long Gallery, I was a little apprehensive as to how we could facilitate this. It could only be described as a poetic and chaotic blend of architecture and multimedia, bracingly different to anything previously exhibited here.

The artist’s arrival in Brisbane in July 2015 was an opportunity to explore the exhibition space and to investigate the acts of destruction, demolition and discarding. We located businesses that collect abandoned Queenslanders1 for potential material for the project. This in turn led us to timber salvation yards, like Kennedy’s, which have provided us with much of the material in this installation. Large ruin-like slabs of wood, gnarled and greying, were discarded parts of old bridges, wharves and buildings from in and around Brisbane. With the list of materials locked in, it was important that the collaboration between artist, exhibition designer, builder and structural engineer was established and defined. Unlike other installations, the complexity of the build and the great structural loads being placed on the building’s footprint, it was imperative to agree on a workable and realistic scope.

The project presented new challenges to the exhibition team and required the support and knowledge of our resident structural engineer, Paul Callum. These limitations included the capacity of the Long Gallery to accommodate the total mass of the timber structure. Resolving these engineering problems often takes a considerable amount of time and patience. With the artist’s visions for his installation in mind, these fundamentals were being challenged. There is sometimes tension between the realities of exhibition design, what the artist desires and, ultimately, what the building can support. Asim is often reminding me via email correspondence of the installation’s primary role: ‘The installation needs to get so dense as one goes inside that it becomes claustrophobic’.

The language of Asim’s structure is that of a forceful, disease-like intervention within the pristine white walls. It will inhabit the space in a frenzied way, forcing the audience to travel through a complex maze of timber, populated by electronic interactions buried into the timber: he wants to encourage an active approach to his installation, providing a mulititude of light, sound and touch sensors that give back to visitors in a non-traditional way of viewing art. Asim also describes this journey as dangerous, suggesting that the viewer must take care when entering the site as there is no invisible barrier between them and the artwork.

In order to understand the scale relative to the space and to the audience, prototyping is also part of the process. Asim wanted to build a 1:1 scale model to illustrate the height and bulk of the timber. We positioned black plastic sheets in the void to represent the work’s vertical timber elements, the centrepiece of which is a dense, crowded environment that punches through the middle. The main timber structure throughout the Long Gallery reinforces the effect of a ruin, while smaller beams offer support and a decorative richness of density and texture to the overall installation. A clear set of rules for the work’s installation had to be defined, not only dictated by the building itself but also informed by the Gallery’s workshop team and specialist crane technicians, whose role it was to move lengths of timber that range from 6 to 16 lineal metres, some weighing a staggering three tonnes. Our ‘shopping list’ for Kennedy’s included nearly 400 lengths of large recycled timbers and 1000 square metres of recycled floorboards and cladding. The largest timbers, which had been in the yard for nearly 16 years, were several 300 x 300mm timbers that had been bolted together to form a timber member that was 600 x 300mm and 16 metres long. The rusted bolts and fixings that hold these pieces together formed part of Asim’s recycled aesthetic. The weight of these incredible timbers, coupled with his desire to create a claustrophobic experience, has meant that we’ve pushed the limits of the loading of the building.

Asim’s preferred installation method is organic, as the dense skin to the main structure is applied over the remaining weeks of the build period. Four truckloads of timber have been dropped in the Long Gallery and, over a four-week build, assembled and fixed into positon. An almost corporeal, experimentation approach to the install has challenged the traditional rigours of Warren Watson, the Gallery’s workshop manager.

As exhibition designers we are there to facilitate the artist’s vision in a considered and meaningful way, so that a connection is made between the audience and the art. We also consider the safe design aspect of the installation. Much thought has been given to ensure public safety and accessibility, minimising the permanent impact on the building and the longevity of the structure over the duration of the exhibition. We expect that several bandaids may be handed out, due to nature of the recycled timber, for which we apologise in advance! 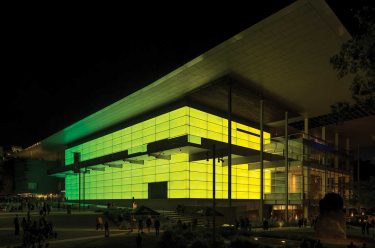