Barbie’s Dream House c.1962 epitomises the modern Californian design that led to the manufacture of innovative and creative toys for children, and a version of the famous abode will be on display during ‘California Design 1930–1965: Living in a Modern Way’. The house provided children with the perfect modern space in which to act out their dreams of the future.

You may not expect furniture designers Ray and Charles Eames and toy creator Mattel Inc to have much in common, and yet both were interested in design for children and began making products in Los Angeles, California, during the mid twentieth century. Their works reflect the modern aesthetic and cutting-edge design that were emerging from the state at the time. From the mid twentieth century on, ‘the aesthetic, material, and technical innovations in design for children were remarkable, closely paralleling, and at times directly influencing, other areas of visual culture’.1

Design for children is one component of the Gallery’s ‘California Design 1930–1965: Living in a Modern Way’ exhibition from the Los Angeles County Museum of Art (LACMA), and is represented by a number of objects, including Ray and Charles Eames’s House of Cards 1952 and Barbie’s Dream House c.1962 by Mattel Inc. The Dream House originally displayed during the exhibition at LACMA was loaned to them by Mattel but was unable to be brought to Australia. Instead the Gallery has sourced another Dream House for display from a private seller in North Canton, Ohio. This house has undoubtedly been played with and treasured, although not a single cardboard cushion has gone missing in the intervening 51 years. A pencil drawing of an Elvis album on the reverse side of one of Barbie’s records is a small reminder of the child who once played with this house.

The 1962 Dream House is simple and functional. Its cardboard construction and compact size was made to be easily folded and carried by a handle. The box in which it comes transforms into the house itself: the lid unlatches at the top and two cardboard leaves fold out to form the floor and sides. It is remarkably modest, with a single room serving as both living and bedroom, and no kitchen or bathroom included. Despite the lack of amenities, there are homely touches, with books on shelves, a framed picture of Barbie’s relatively new boyfriend, Ken (who appeared on the scene in 1961), and a collection of records. All accessories are made of cardboard, and the accompanying furniture — much like today’s offerings from IKEA — would have been assembled at home by the owner.

According to the Los Angeles Times’ Home magazine in 1951, the ‘California look’ was typified by ‘glowing color, originality of treatment and simplicity of design’ .2 The sleek form and exterior detailing of the early Dream House is reminiscent of a bungalow or ranch-style dwelling and, together with its minimalist Scandinavian-inspired furniture and bright colours, is perfectly in keeping with this look. It provided children with an example of modern aspirations and a space in which to act out their dreams of the future.

Mattel Creations was founded in 1945 by Ruth and Elliot Handler, along with their friend, Harold Matson, and initially produced wooden picture frames and doll houses before going on to create musical toys.3 In 1959, Mattel Inc launched the ‘teen fashion model’ Barbie, named after the Handlers’ daughter, Barbara. The first Barbie wore a black-and-white swimsuit and cat’s eye sunglasses.4 In her debut year, she had 22 ensembles, and while some of these were domestically themed, most were glamorous and sophisticated. One of these outfits — titled ‘Suburban Shopper’ and produced from 1959–64 — has been purchased for display in the Gallery’s exhibition, along with the Dream House. The full-skirted blue-and-white cotton sundress came with a straw hat, a pearl necklace, a pink telephone and a straw bag filled with fruit.

Barbie’s taste in fashion and architecture has changed considerably since the mid twentieth century. The house’s current incarnation is an elaborate, three-level townhouse complete with elevator, in her now signature pink. However, Barbie’s more humble beginnings, with the small but stylish and durable Dream House c. 1962, epitomise the modern Californian design that led to the manufacture of innovative and creative toys for children.

‘California Design 1930–1965: Living in a Modern Way‘ which opens at the Queensland Art Gallery (QAG) on 2 November 2013 with talks, tours, and special events will introduce Australian audiences to a broad spectrum of industrial, architectural, commercial, fashion and craft design from California. Organised by the Los Angeles County Museum of Art (LACMA) the exhibition presents over 250 objects. The publication California Design 1930-1965: Living In A Modern Way is the first comprehensive study of mid-century modern California design which offers new research and ideas about the furniture, ceramics, graphic and industrial design, architecture, metalwork, textiles and fashion produced in the Golden State. 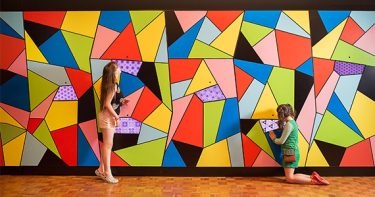