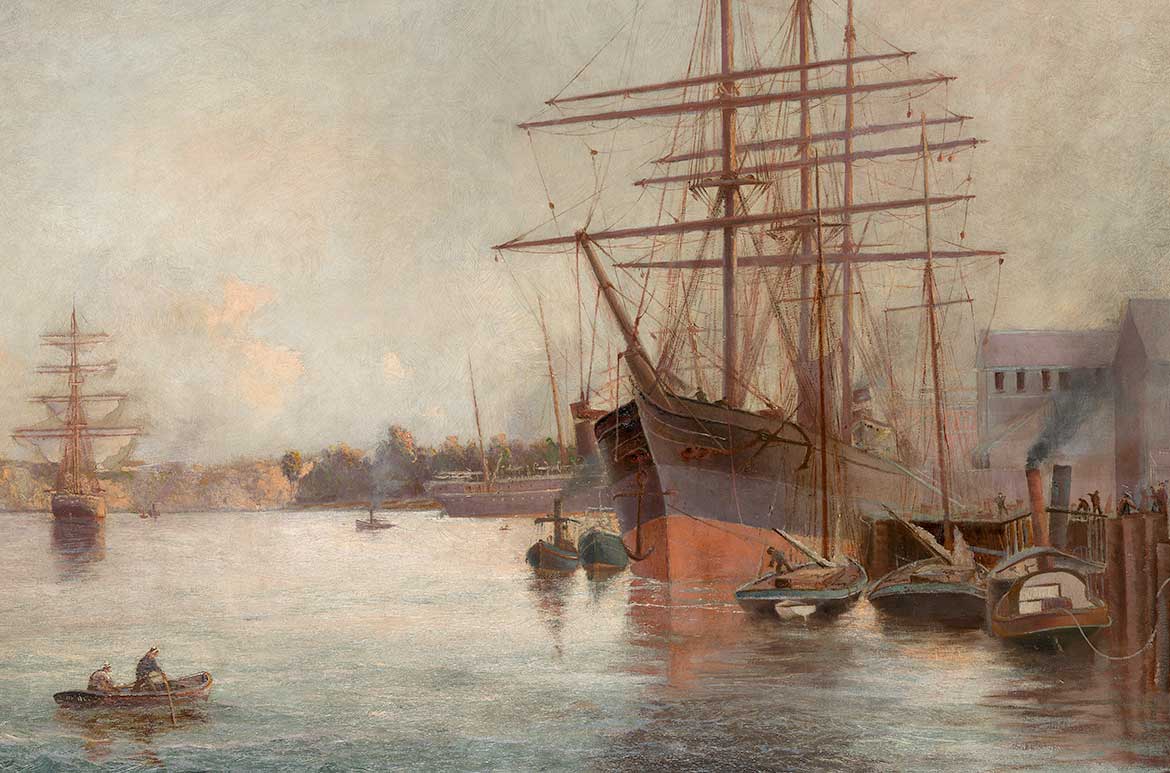 George Wishart (1872-1921) was born in Brisbane and was taught painting by Isaac Walter Jenner, Brisbane’s foremost marine painter (illustrated below). Wishart also worked professionally as a photographer and was associated with local firm Thomas Mathewson Photographic Studio (see contemporary depictions of Brisbane below). Wishart’s painting A busy corner of the Brisbane River 1897, on display in the Australian Art Collection at the Queensland Art Gallery is of considerable interest and importance as paintings which represent the commercial activity on the Brisbane River are extremely rare.

George Wishart ‘A busy corner of the Brisbane River’ 1897

Wishart mainly painted scenes of Moreton Bay and the Brisbane River. A busy corner of the Brisbane River is the most significant of his works, when it was first exhibited at the Queensland International Exhibition in 1897 it was highly praised as ‘decidedly one of the attractions of the gallery’. The reviewer from The Queenslander on 15 May that year continued: ‘The monotony of colour noticed in many of Wishart’s early works, suggesting that photography and imagination took the place of a close study of the ever-varying and always perfect colouring of nature, has in this work entirely disappeared. All those accidental lights and tints of nature are beautifully reproduced’, with the reviewer commenting on the ‘brilliant and sunny’ depiction of Brisbane’s wharf-side activity.

The enthusiasm of the reviewer most probably indicates that the work’s tonal values have been much reduced in the intervening century, however the painting has recently undergone major conservation (see conservation video below).

Public collections in Queensland have few outstanding examples of the work of early artists. Of the major works dating from the 19th century, the Panorama of Brisbane 1880 by J A (Joseph Augustine) Clarke (1840–90), Queensland‘s first professional artist and art teacher, is undoubtedly the best known and most significant. You can also view the nearly 4–metre–long panorama in the Australian Art Collection at the Queensland Art Gallery.

Brisbane photographed by Thomas Mathewson in 1881

View o f Brisbane 1885 (illustrated) and Brisbane from Bowen Terrace, New Farm 1888 (illustrated) serve an important function — at the time of their execution such works supplied the population of early Brisbane with artistic impressions of their new home, in some ways validating it — art as a sense of place.

As historical documents, Isaac Walter Jenner’s paintings of early Brisbane record the busy shipping life of the colony. This is particularly true of Brisbane from Bowen Terrace, New Farm (illustrated), not only for its depiction of early Brisbane, but especially of the rigging of the ships, which testify to Jenner’s love and knowledge of the sea. The main ship in the painting is the RMS Quetta, which was regularly used on the London-Brisbane ocean mail service.

A busy corner of the Brisbane River records the commercial activity at the Eagle Street Wharves, now part of Brisbane’s Central Business District. Towards the background, Wishart has captured the Bunya pines in the old botanic reserve, later to become the City Botanic Gardens established in 1828 to provide food for the early penal colony. Further back, the light strikes the cliffs at Kangaroo Point (illustrated above).

A photograph of the ‘A.W.S.N. Wharf and Thomas Browns Building’ from 1989 (illustrated below) shows the two galvanised iron covered warehouses that Wishart depicts. The row of windows set just below the roof-line in the distant building is particularly distinctive. Similarly, the photograph ‘Eagle Street Wharves’ from 1888 (illustrated below) is close to the character of the painting, other than the masted ship facing the opposite direction, suggesting that Wishart based his works on photographs.

The first wharf along Eagle Street was built in 1858 by the Australasian Steam Navigation Company (ASN) where passenger and cargo ships would dock in Brisbane. By 1864, the wharf was expanded and extended in both directions, upstream and downstream.

The construction of the new Customs House (illustrated below) on Queen Street with river frontage, stimulated wharf development around the Eagle Street Wharves with the grand new building opening on the site of its predecessor in 1889. This confirmed that the Petrie Bight area was still the heart of the port of Brisbane for some time.

Downstream from the Customs House, wharf development occurred a little later, extending towards the bend of the river opposite Kangaroo Point below Bowen Terrace, then further downstream around Newstead.

Today, the original Eagle Street Wharf is home to waterfront dining, with the Eagle Street Pier further enhanced by the Howard Smith Wharves entertainment precinct downstream under the Story Bridge.

Go behind-the-scenes as we delve into the secrets of A busy corner of the Brisbane River. The painting has undergone major conservation, and as a late 19th century painting, it has special conservation needs. These are mostly due to the difficulty of removing stubborn wax and varnish layers from thinly painted, sometimes solvent sensitive paint, in areas such as the rigging. The varnish had become yellowed and some of the in-painting which had been completed to reinstate or restore damaged areas had discoloured.

Also revealed are many small changes, examination shows that the small boat in the foreground of the completed painting was an afterthought (see illustration below), as seen in the X-ray, the river continues through the boat design, and there is no sketch of it in the original composition. 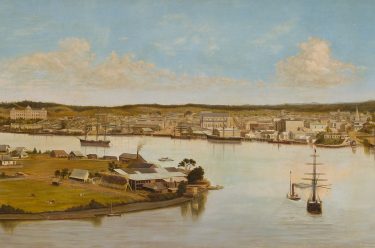