Mirdidingkingathi Juwarnda Sally Gabori lived an entirely traditional life for her first 23 years, moving between her family’s main homeland sites and living according to an unbroken ancestral culture. In 1948, following devastating drought, storms and a near four-metre tidal surge, she and her kin were moved to nearby Mornington Island. In our series on her work we look at her brother’s country.

The incredibly exuberant works focused on three subjects: Dulka Warngiid and mapping Bentinck Island through their dulkiiwatha (the places they were born and the ties that bind them to those places); Sweers Island, the second largest of the islands of their Kaiadilt Country, including the final resting place of Dibirdibi, the Rock Cod Ancestor; and Makarrki (King Alfred’s Country), mapping the place of King Alfred, a key figure in all of the artists’ lives.

Makarrki is a very special place and has a big river that runs through it. This is where dugong and turtles come on a high tide making it easy for the men to catch them. Mirdidingkingathi Juwarnda Sally Gabori

The head of the Makarrki River, at the heart of the northern shore of Bentinck Island, was an important hunting ground and Sally often recalled the exploits of her brother (or brother-in-law) Tarurukingathi Kulkitji (Buddy) wrestling with dugongs here. It was also the country of her older brother, Makarrkingathi Dingkarringathi Thuwathu Bijarrb (King Alfred). King Alfred was the leader of the main Kaiadilt clan in the years prior to their removal to Mornington Island. He is remembered by his family as a strong warrior and leader. In the late 1940s a period of great drought caused tremendous friction within Kaiadilt society and conflict was common. In a fateful turn of events King Alfred took the life of Buddy, before Buddy’s brother, Kabararjingathi Bulthuku Pat Gabori killed the King and took his younger sister, Sally, as his wife. Sally’s paintings of this place are layered with complex memories and intense emotions.

Sally and her sisters and nieces who collaborated on Makarrki – King Alfred’s Country 2008 (illustrated) have said:

We have painted one of the most important places on Bentinck Island. This is where King Alfred was born. This is his country. King Alfred was Sally’s big brother…. He was famous as a strong warrior and leader; he was feared by other tribes. This place is special to all seven of us. We all have close connection to this country. That is why we picked it as painting for us to do together. 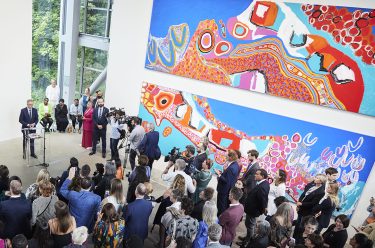