The Gallery has acquired five rare prints by Pablo Picasso (1881-1973). The five new works are from a group of 15 etchings and drypoints known as ‘La Suite des Saltimbanques’ and were created on the cusp between the artist’s ‘blue’ (1901–04) and ‘rose’ (1904–06) periods. The new prints are integrally connected to Picasso’s paintings and drawings of the same period, which significantly includes La Belle Hollandaise 1905, held in our Collection.

The Gallery is extraordinarily fortunate to hold one of Picasso’s most celebrated early paintings, La Belle Hollandaise 1905. This group of five of Picasso’s most important prints, acquired through the generous support of private benefactors, now brings our total Picasso holdings to 13 works.

Comprising some of the best known works in the ‘Saltimbanques’ suite, what is remarkable about these prints is the common humanity and humility of their subjects – representing the downcast social milieu of actors and acrobats in which Picasso was moving at the time – and the economy, sensitivity and brilliance with which it is captured. They provide an entirely new context for La Belle Hollandaise.

Le Repas frugal (The frugal meal), the most valuable of the newly acquired works, and a rare impression of Salomé were purchased with funds donated by the Margaret Olley Art Trust.

Through extensive research and an international, 13-month search, we have been able to secure these works with the generosity of the late Margaret Olley and other Gallery Foundation supporters.

The works were made immediately following the artist’s move from Spain to France in 1904, when he was only 22 years old. The etchings are his first serious attempt at printmaking, when Picasso looked to translate his painterly style to the printmaking process, and mark an important period of personal and artistic transition in the artist’s life.

About The Margaret Olley Art Trust

Established by the artist in 1990 to acquire works of art for public collections, the Trust continues to pursue the late Margaret Olley’s project of philanthropic support for the arts. It has made significant gifts to both state and regional galleries across Australia, including to QAGOMA, since 1992. Margaret Olley also held works by renowned artists including Picasso and Matisse in her private collection, which she later gifted to state galleries, QAGOMA among them.

Visit the Gallery of Modern Art from 15 June – 13 October 2019. ‘A Generous Life’ examines the legacy and influence of much-loved artist, Margaret Olley who spent a formative part of her career in Brisbane. A charismatic character, she exerted a lasting impact on many artists as a mentor, friend and muse.  The exhibition will profile a life that was immersed in art – her own and those she supported. 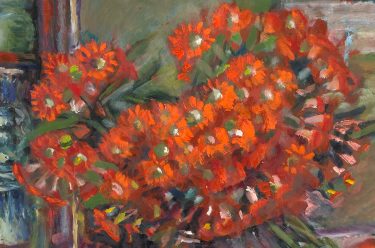