Though quite austere, these mindirr (conical baskets) by Arnhem Land artist rgaret Rarru Garrawurra carry the cultural weight and mystery of their origins. Rarru was born in 1940 in farthest northern Arnhem Land into the Liyagawumirr people. She is one of a strong group of sisters of the renowned painter Mickey Durrng Garrawurra. During his last protracted illness in 2006, with great foresight and wisdom, Durrng passed the knowledge and authority to Ruth Nalmakarra (and through her to his other sisters) to paint the most important of the Liyagawumirr clan designs for the first time. As he stated, ‘These designs are the power of the land. The sun, the water, creation, for everything’.1

After tentative beginnings, the women responded to their loss with a burst of creative energy, embracing the opportunity to paint their cultural understandings on barks and hollow logs. Within a year they began exhibiting, and in 2007 Rarru won the Telstra National Aboriginal and Torres Strait Islander Art Award for bark painting, for her winning work Ngarra Body Paint Design, a subtle abstract of shallow vertical triangles and circular waterholes on an irregularly shaped bark.

Like many Aboriginal women, Rarru had learnt early in life the meanings of woven fibre objects and the techniques for making them for sale and daily use. Eventually, she began experimenting beyond traditional forms, using the introduced coil-weaving technique to make works inspired by pop star Madonna’s 1980s videos (her music was a constant soundtrack to life in the north at that time). Rarru interpreted the star’s iconic corset costume in woven pandanus baskets, stitching together two large, pointed breast forms and adding a convenient double handle to hold everything needed for a day out. She was also the first to make a ‘Madonna’ bra from two dyed, coil-woven pandanus cones held in a woven string mesh. A similar Rarru bra caused quite a lot of comment when worn to a classy artists’ party in inner Brisbane in 2002.

Seven mindirr (conical baskets) by Rarru in dramatic charcoal-black tones were recently acquired by the Gallery. Though the perfectly controlled forms are quite austere, and, like her family’s paintings, could be read as modernist expressions of the traditional, the single-colour baskets carry the cultural weight and mystery of their origins: the Djang’kawu creator ancestors spilled new lives, language and law from such baskets as they travelled from the east, bringing fresh water and life to the featureless land. The raw pandanus leaves used by Rarru were saturated with colour by soaking them in water overnight with an unpromising small, flat leaf. The dark, almost metallic surface of the tightly twined baskets becomes a subtly textured field, highlighted with small irregularities in the weave.

Margaret Rarru spends her time with family at her beloved Langarra homeland on Howard Island, off the coast of Arnhem Land, and at Yurrwi (Milingimbi Island), where she sells her work at the art centre. In the timeless, unhurried Langarra environment, she can gather materials and process them into distinctive works, imbued with dreams of their ancestral origins. 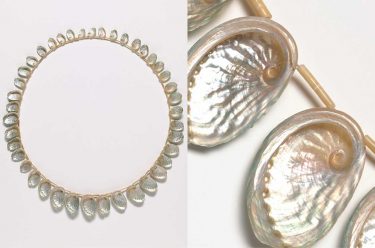