The Gallery’s summer blockbuster explores water in all its states and across the globe. ‘Water’ highlights this precious resource and aims to spark conversations on the critical challenges of climate change, access to water and ecological fragility. One of the major installations in the exhibition is Danish–Icelandic artist Olafur Eliasson’s Riverbed 2014. Here, we delve into the challenges of presenting this incredible work at GOMA.

Olafur Eliasson is known for big productions. The weather project — a huge fake sun in the Tate’s Turbine Hall — brought him attention in the early 2000s, and since then he has undertaken increasingly ambitious installations. For ‘Water’, we invited Eliasson to reprise one of his largest projects, in which he re-creates a rocky stream inside the gallery, complete with flowing water. Working with his interdisciplinary studio of over 100 craftspeople, architects, archivists and filmmakers, as well as QAGOMA’s exhibition designers and exhibition curator Geraldine Kirrihi Barlow, Eliasson brings a glacial landscape to Brisbane.

Eliasson was born to Icelandic parents living in Copenhagen. When he was a child, his father moved back to Iceland, where the artist would go on to spend each summer holiday. Riverbed is his attempt to capture the Icelandic streams of his youth, and the soft grey light so particular to this northern country. The artist has often worked with water: in Green river 1998–2001, he turned six rivers a vivid green using the water-soluble dye uranine; and in New York City waterfalls 2008, he created four artificial waterfalls off bridges across the East River.

We felt there was something special about Riverbed. The water in the work is quieter; it takes time to discover the flowing stream amongst the tonnes of grey rock. As Barlow remarks, Riverbed was selected, in part, because it speaks to the Australian experience of drought and our worries about the future:

Eliasson has made so many works that relate to water. What attracted me to Riverbed was its relevance to the Australian experience of drought and complex cycles of time: the beginning of time and the end of time; linear flow or circular flow. Also the experiential and interactive quality — allowing us to touch water, not just see it.

The work was first commissioned for the Louisiana Museum of Modern Art, just north of Copenhagen. QAGOMA’s iteration is the artist’s first attempt to remake the work, almost 15 500 kilometres from the original. Last year, Barlow visited Eliasson’s studio in Berlin to pitch for a second showing of Riverbed:

It’s an incredibly ambitious work and not one the artist was planning to revisit, certainly not so far away. We had to convince the artist’s gallery, then his studio, that we were the right museum to tackle a project like this. It’s very unusual to have the talented team of designers that we do at QAGOMA.

Riverbed is now the result of global collaboration. For over a year, our in-house team of exhibition designers, builders and carpenters have worked in tandem with the artist’s studio. Through many emails, Skype discussions and intricate 3-D modelling, the two teams have developed a vast river topography in response to GOMA’s architecture.

This monumental installation disrupts the gallery space, appearing to be plucked straight from nature. Exhibition designer Megan Franks has worked closely with the artist’s studio to achieve this uncanny effect. She describes the many elements that come together in Eliasson’s installation:

It’s also fitted with pump systems to regulate the flow of water through the channel.

The foundations of the work follow the standard building techniques found in architecture — timber studs and frames — just on a very large scale. We are always sourcing varied materials working with different artists, but this has been one of the largest sourcing projects I have worked on!

In the original version of Riverbed, Eliasson imported Icelandic stones to Denmark, but from early discussions, it was clear that the same could not be done here. Over many months, Franks contacted local landscaping suppliers and tested small samples of rock that arrived on her desk. Her hunt for the perfect stones required much trial and error, from measuring samples against real Icelandic stones to testing the durability of different types of black sand. She explains:

It was quite difficult to find stones that matched the volcanic aesthetic in a specific shade of grey . . . We wanted rocks that achieved the same basalt and volcanic nature of the stones while also being sourced from local suppliers.

When we were first sourcing the rocks, the show had not been publicly announced, so we had to explain the exhibition to suppliers, and they thought, ‘Oh yeah, so a few bags of rock?’ They were quite taken aback when I replied, ‘No, enough to cover 600 metres squared!’

The majority of the rocks come from Queensland, New South Wales and Victoria, with some harder-to-find pebbles from suppliers in the Asia Pacific region. The decision to go with local and regional rock supplies was not just to abate logistical concerns; the art world is increasingly conscious of its own environmental impact, with material waste, shipping across the world, and numerous flights all contributing to the worsening climate emergency. How to achieve this work — which invites us to think deeply about nature — without harming the environment in the process In other words, how do we make a metaphor responsibly?

Of course, this is the broader challenge — both ethically and practically — of bringing international art to Australia. Restaging Riverbed also required particular ingenuity in design. GOMA’s architecture is of a markedly different time and place to the modernist Louisiana Museum in which the work was first presented. Our building does not invite the same meandering pathways and its double-height spaces tower over the Louisiana’s domestic scale. These differences posed a new problem for Eliasson’s studio. In the second iteration of Riverbed, the question was not only ‘how to bring the outside landscape inside’, but also, ‘how to bring a foreign landscape inside a significantly different space’. As such, the work takes on a new look, and a new meaning, in ‘Water’.

In developing Riverbed, we devised new technical solutions with Eliasson’s studio. In our version, the river does not wind through small rooms, but instead trickles down a steady incline of rock. The adapted design brought new challenges for the exhibition designers. Franks adds that the team has been ‘working within the limits of the gallery in terms of space, weight capacities and the logistics of bringing such a large amount of stones and water into that space’.

In anticipation of these difficulties, she and the team built a few 1:1 model sections of the plan. The prototypes offered new answers to the work’s logistical questions, including the need for better waterproofing and substrate materials.

Olafur Eliasson’s rocky terrain simultaneously evokes many possible futures: drought and new life, apocalyptic destruction and the beginnings of a new world. Across his practice, the artist sees an opportunity to address climate change through an appeal to the emotions:

I believe that one of the major responsibilities of artists — and the idea that artists have responsibilities may come as a surprise to some — is to help people not only get to know and understand something with their minds but also to feel it emotionally and physically.1

Riverbed affects us through its tactility; the cool stones and gentle current of the stream communicate something that climate data cannot. Ultimately, Eliasson creates an artificial environment so that we might realise the value and fragility of the real landscape around us.

Kids and families can explore ocean conservation issues — particularly the impact that ghost nets have on the marine environment — via a spectacular artwork display, a drawing activity and an interactive screen-based animation. Find out more 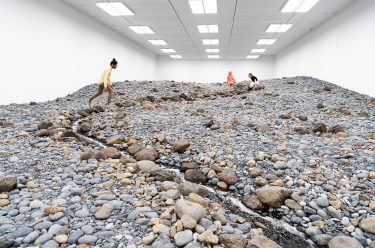