Gibson’s vision of Brisbane celebrating its river changed the face of the city’s South Bank waterfront, with the Gallery winning the Sir Zelman Cowan Award for the most outstanding public building in Australia when it opened in 1982. Related: A Cultural Centre for Queensland

Related: Read more about our story

The other nine structures, many modernist in style are Jørn Utzon’s Sydney Opera House; Australia Square Tower by Harry Seidler and Associates; Roy Grounds Australian Academy of Sciences’ Shine Dome in Canberra; the High Court building in Canberra; Sydney’s Punchbowl Mosque; the Melbourne University Carpark; the Gladesville Bridge in Sydney (which was the longest single-span concrete bridge in the world when it was built in 1964); the Victorian State Offices, and James Cook University Library in Townsville.

The selection was based on three criteria: Architectural Merit (the form, function and structure of the building); Innovation in the use of concrete as a material, as a structure, and aesthetically; and finally, Exemplar of the time, which determined whether the project redefined and expanded concrete’s potential.

The publication of the Top 10 List marks the 90th anniversary of the establishment of the organisation that represents the heavy construction materials industry, Cement Concrete & Aggregates Australia (CCAA), August 26, 2019 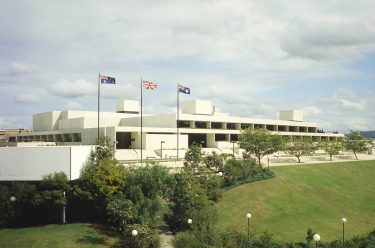