In 1969, the announcement of the Queensland Art Gallery’s new premises to be built at South Brisbane, bounded by Melbourne and Grey Streets to Stanley Street and the Brisbane River, and ultimately morphing into the Queensland Cultural Centre, would signal the transformation of the area. The project would be the catalyst for other major developments at South Bank.

Acquisition of land for the Cultural Centre occurred in three stages: the Art Gallery site, which would in due course, include the Museum (1969–77); Performing Arts Complex and Library sites (1975–79); and the Russell Street site for future expansion (1978–80).

As we celebrate 40 years at South Bank, we look at the buildings that occupied the South Brisbane site and surroundings before the Queensland Art Gallery opened, unearthing images of the site preparation, the building still under construction, and fit out of the interior spaces.

The Art Gallery was initially to be located along Grey Street, Melbourne Street intersection on the site of the York House Private Hotel where the Museum is today, and between it and the river edge was parkland, the Gallery’s horizontal buildings were to step down as terraces to the river, however when the Cultural Centre precinct was proposed, the Art Gallery’s placement moved closer to Stanley Street and the river allowing the Museum to share the footprint.

A hallmark of the Queensland Art Gallery and Cultural Centre as a whole is an integrated approach to the design of the architecture’s low-profile monolithic forms, geometric approach to design, and simple, ‘pure’ construction details, all in parallel with the Brisbane River. Specifically the use of a simple palette of materials throughout; a monolithic, white, lightly sandblasted concrete finish and glass, with bronze, stone and timber detailing. The architects settled on a concrete mix that included: white cement from South Australia; fine white sand from Stradbroke Island, the second largest sand island in the world; and fine and coarse aggregates from the Pine River, also in the Moreton Bay Region.

The Queensland Art Gallery was opened by the Premier of Queensland on 21 June 1982, and in the same year, the Gallery won the Sir Zelman Cowan Award for Public Buildings, the Royal Australian Institute of Architects’ highest award for public buildings. 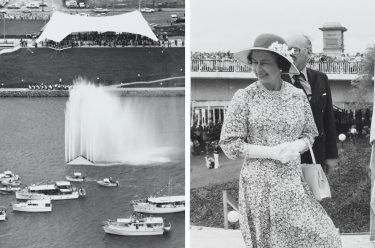