Telling the Story of Australian Art in new and innovative ways

Swedish-born artist Oscar Friström’s Duramboi 1893 depicts James Davis, a young convict sent from Scotland to Australia. Davis escaped from a Moreton Bay penal colony in 1829 and lived with several Indigenous groups in the area, particularly on Fraser Island (where he was known as Duramboi), until he was found in 1842. During this time, Davis learned many languages and customs, and was treated as an honoured guest. He later worked as a guide for settlers and occasionally as a court interpreter.

Sidney Nolan, on the other hand, imagined and mythologised the experience of Scottish woman Eliza Anne Fraser, who was shipwrecked off the coast of Queensland in 1836. Accounts of Mrs Fraser’s experience, steeped in colonial assumptions and elevated to the status of legend through multiple and contradictory tellings, effectively demonised the island’s inhabitants, and the stories have since been contested. Nolan’s evocation of an outsider in an unfamiliar landscape is closely tied to his own emotional state at the time (he visited Fraser Island in 1947 at the end of a dramatic breakup with Sunday Reed).

The story of Mrs Fraser gave rise to the naming of the island, which is called K’gari by the Indigenous people of that land. Here, Nolan’s works appear alongside the black-and-white photographs of Fiona Foley’s Badtjala woman 1994 — portraits based on ethnographic photographs of an unnamed ancestor held in museum collections. Foley counters the tale of Eliza Fraser: her self-representation as part of this lineage serves to restore a sense of her people’s dignity, power and agency.

Transformative works also feature in the display, including Arthur Boyd’s Sleeping bride 1957–58 — an acquisition from Boyd’s important allegorical series titled ‘Love, marriage and death of a half-caste’, otherwise known as ‘the Brides’ series. Resulting from the artist’s travels to central Australia in 1953, it is considered one of the most significant achievements in Australian modernism, akin to Sidney Nolan’s ‘Ned Kelly’ paintings from the 1940s. 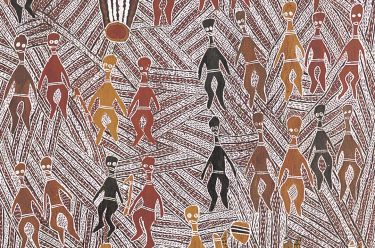