Engineer Rex Tilbrook (1915-77) first built an all-Australian motorcycle in 1947, and from his Adelaide factory from 1950, the first production roadsters were sold, identified by oversized fuel tanks to cover the distances typically travelled in Australia, after originally producing a range of motorcycle components and accessories, as well as the Tilbrook classic sidecar to suit a range of motorcycles, including his own.

The 1956 Tilbrook prototype — the last Tilbrook to be built — departed significantly from the models that preceded it, with the most striking feature the all-enclosing bodywork which covered the petrol tank and carried the seat.

The 1956 Tilbrook prototype was the last road motorcycle Australian engineer Rex Tilbrook made, and was presented at the Royal Adelaide Show of that year. It is distinguishable from other Tilbrooks due to its striking bodywork covering the fuel tank and hidden toolbox compartment. Unfortunately, by the 1950s the Australian motorcycle trade had significantly declined, so the 1956 prototype never made it to production. This is the only surviving example of this groundbreaking Australian design. 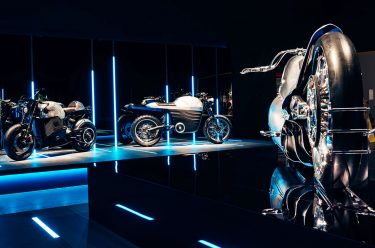