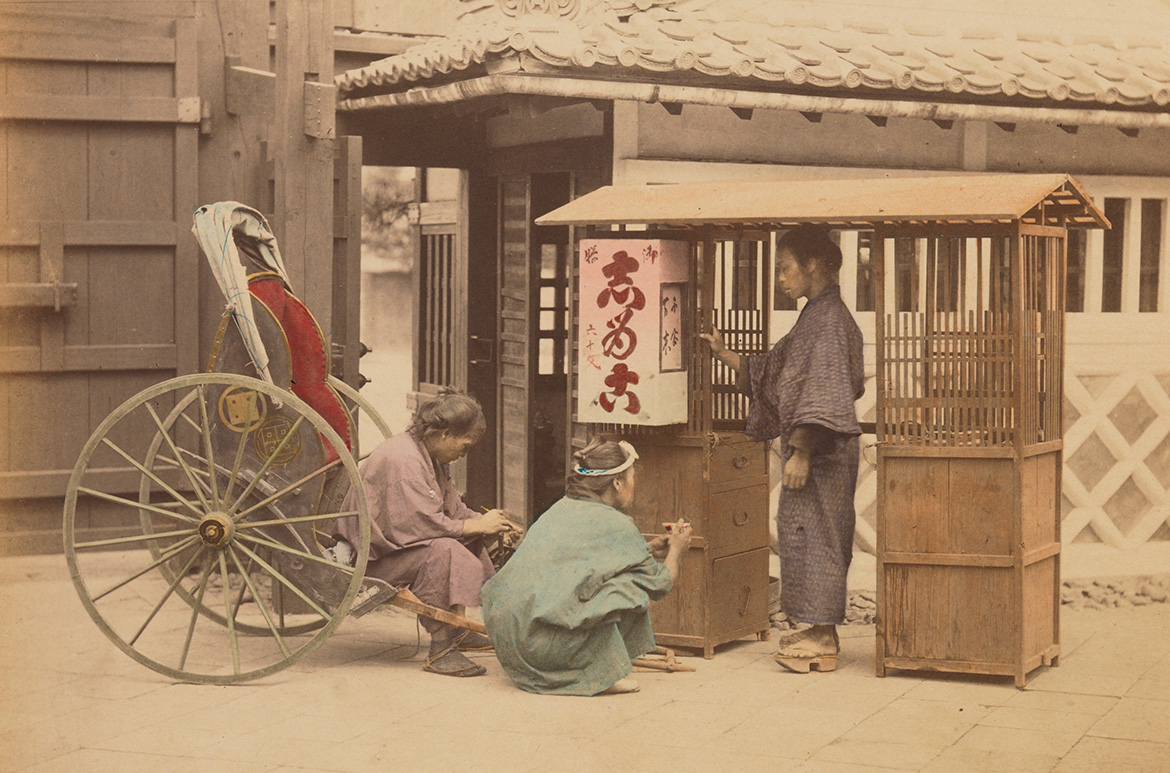 Photography from the beginning of the Meiji era (1868-1912) captures a moment in Japanese history when influences and technologies were beginning to interact with traditional life, and the nation was on the verge of social transformation that would signal the end of the ‘floating world’ culture of centuries past.

For many travellers to Japan in the nineteenth century, a photographic album was a highly sought-after commemoration of their visit. The sophisticated images taken by Felice (Felix) Beato, and later Baron Raimund von Stillfried-Ratenicz, also contributed significantly to the international image of Japan during a formative period in Japanese history. Their portraits of porters, performers, street musicians and traders are stylised representations of social classes. Their early success was, in part, due to their ability to selectively present Japan as an oasis from the industrialised world.

Differences between the photographs and the wider realities of the Meiji Restoration (1868–1912) reflected the transcultural interactions and political economics specific to late nineteenth-century Japan.

Related: A Fleeting Bloom Read about necessary conservation repairs to stabilise works in the exhibition

Stay Connected: Subscribe to QAGOMA Blog Be the first to go behind-the-scenes at exhibitions and events and hear stories from exhibiting artists.

Yakatabune (pleasure boat) on lake 1867-68 is part of a group of early hand-coloured photographs that reflect the introduction of commercial photography to Japan during the Meiji Restoration, a period of rapid modernisation as the country transitioned from a class-based feudal system to a society open to increased economic and cultural exchange.

After the fall of the Tokugawa Shogunate in 1858, Yokohama developed rapidly as a prominent port city for many foreign visitors who brought with them new ideas and technologies. One of these visitors was the enterprising Italian–born photographer Felice Beato, who had previously documented conflicts in India and China. Beato established a photographic studio in Japan in 1863 and became the first foreign photographer to work extensively in the country.

Beato’s photographic interests encompassed portraits, landscapes, and scenes from daily life. He often applied the skills of local artisans and woodblock printmakers who used colour to highlight intricate details such as facial features or the motifs on a kimono, giving the subjects a more animated form. Beato sold his photography stock and business in 1877, and subsequently turned to trading silver in which he lost his fortune. He left Japan in 1884 and set up a studio in Burma in the 1890s.

Austrian-born Stillfried-Ratenicz trained as a painter and had pursued varied careers before settling in Yokohama as a photographer around 1868. He established the studio Stillfried & Co, which he ran until 1875; it then became Stillfried & Anderson and operated for a further decade, during which time he bought the studio and stock of Felice Beato. Stillfried-Ratenicz trained many young Japanese photographers, including Kusakabe Kimbei, to whom he sold the majority of his stock before leaving Japan in 1886.

‘A fleeting bloom: Japanese Art from the Collection’ is on display at the Queensland Art Gallery (QAG) in Gallery 6 (Henry & Amanda Bartlett Gallery) until 29 September 2019.