In 2014, Hamish Sawyer travelled to Vietnam and the Philippines with José Da Silva to meet with artists and learn about the context of their artworks for ‘The 8th Asia Pacific Triennial of Contemporary Art’.

With a population of over 18 million, the Philippine capital of Manila is the nexus of the country’s art scene, home to a network of institutional spaces, commercial galleries and an art fair, as well as more experimental and artist-run initiatives. Two exhibitions provided an invaluable introduction to our three-day visit to one of South-East Asia’s biggest cities.

‘What does it all matter, as long as the wounds fit the arrows?’ is the title of an exhibition that considered the legacy of the late artist and educator Roberto Chabet, staged at the Cultural Centre of the Philippines (CCP). Chabet was a leading conceptual artist, curator, teacher and mentor to several generations of Filipino artists. The exhibition included work by Yason Banal, whose practice moves between installation, photography, video, performance, text, curating and pedagogy. In addition to this, he also teaches film studies at the University of the Philippines Film Institute. For APT8, Banal is co-curating ‘Filipino Indie’, a survey of independent and experimental filmmaking from the Philippines since 2000, with QAGOMA’s Senior Curator and Head of Australian Cinémathèque, José Da Silva. Work by Banal also features in the Metropolitan Museum of Manila’s permanent exhibition ‘The Philippine Contemporary: To Scale the Past and the Possible’, curated by art critic and scholar Dr Patrick Flores, Professor of Art Studies at the University of the Philippines. Opened in early 2013, the landmark exhibition traces the development of Filipino visual art from the early twentieth century right through to contemporary practitioners.

One such contemporary artist is Maria Taniguchi, who had a solo exhibition on display at Silverlens Gallery, a commercial space in the Makati district. Taniguchi is best known for her ongoing series of ‘brick’ paintings, in which she explores the infinite surface variations of a uniform grid pattern. Despite their predetermined composition, the surfaces of these paintings are not uniform or static. Subtle variations become discernible as light reflects the surface and the viewer moves in front of the painting. Taniguchi will exhibit two major paintings from the series in APT8.

A highlight of our time in Manila was visiting the Museum of Contemporary Art and Design (MCAD), located on the campus of the De La Salle-College of Saint Benilde. Director Joselina Cruz gave us a tour of the Museum, which was hosting an exhibition of international video art during our time in the country. We also had the privilege of meeting renowned American–Filipino artist Paul Pfeiffer, who was undertaking a residency at MCAD to produce a new body of work, subsequently shown at the gallery in late 2014.

Vietnam has undergone dramatic economic change since the introduction of market reforms in the late 1980s, while maintaining a one-party socialist political system. Cultural censorship continues to impact artists and their ability to respond to these changes.

Our research in Ho Chi Minh City was greatly assisted by Zoe Butt, Executive Director and Curator of San Art, Vietnam’s most active, independent contemporary art space. Butt was the Assistant Curator of Contemporary Asian Art at the Queensland Art Gallery from 2001–07, before taking up the role of Director, International Programs at the Long March Project, Beijing. Since 2009, she has led San Art’s dynamic program of exhibitions, residencies, lectures and international programs.

One of the many artists we met during our three-day visit to Ho Chi Minh City was UuDam Tran Nguyen. Tran Nguyen’s videos reflect on contemporary life in Vietnam and the way rural and urban spaces have been transformed by dramatic economic and industrial development. His 2012 work Waltz of the Machine Equestrians has been presented to great acclaim in a number of international exhibitions, including the 2013 Singapore Biennale. For APT8, Tran Nguyen will premiere a new video, The Serpent’s Tail, which will continue his playful exploration of the impact of heavy traffic in Ho Chi Minh City.

On our final evening in Ho Chi Minh City we attended a dinner at the home of APT5 artist Dinh Q Le. Dinh has experienced continued success since APT5 with an edition of his APT work The farmers and the helicopters 2006 being acquired by the Museum of Modern Art in New York, and a survey exhibition of his work opening at Tokyo’s Mori Art Museum in mid 2015. Over a traditional meal cooked by Dinh’s aunts, we enjoyed a lively discussion on the state of contemporary art in Vietnam led by Dinh, Zoe Butt and Rich Streitmatter-Tran, co-curator of APT6’s Mekong Project. This memorable evening was testament to the long-term significance of the APT for artists and curators alike. The relationships that are forged through the project have provided a catalyst for ongoing collaboration and exchange throughout the Asia Pacific region and beyond. 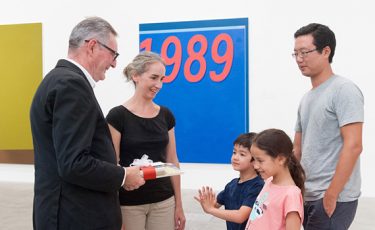 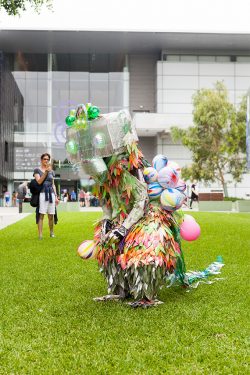