Many of us find ourselves transfixed in front of a screen… watching video is now such a part of our daily life that it has become an everyday activity — given the variety of video works, QAGOMA’s current travelling exhibition just focuses on performance, experimentation and theatricality in video art from the 1960s to the present.

You can experience a diversity of these videos when ‘Asia Pacific Video’ tours to venues in regional Queensland. Artists in the Asia Pacific were quick to embrace the new possibilities of video as it emerged as an art form in the early sixties, and the region is now home to some of the world’s leading moving image artists.

From the most basic use of a hand-held video camera to elaborate and theatrical productions, video has also allowed artists in the region to explore and communicate their social conditions, cultures and ideas on ever-evolving screen-based platforms. The exhibition highlights artists experimenting with video as an art form, capturing bodily actions and performative practices, creating intersections between contemporary art and other screen and film cultures and developing new ways to explore materials, objects and environments.

‘Asia Pacific Video’ celebrates video as an artistic device that enabled artists to bring together different expressive forms, and to investigate ideas and document activities while no longer relying on traditional art materials and methods of art-making.

Overexposed memory 2015 by Joyce Ho is a video of a person suspensefully biting into pieces of fruit and reducing it to a pulpy mush in a meticulously staged production.

Salote Tawale’s I get so emotional 2006 is a critique of traditional female and Pacific islander roles that sees the artist performing various musical stereotypes performed to the lyrics of Whitney Houston’s ‘I get so Emotional’.

Tsui Kuang Yu’s Shortcut to the Systematic Life 2002–05 is a series of intentional misunderstandings of urban architecture and ritual which playfully interact with public space and what it means to live in the city.

Performance: AIUEONN Six Features 1994 is a work by pioneering video artist Takahiko Iimura exploring the relationship between Japanese and English in an experiment of performance and sound.

In Leaf Fall 2008 Neha Choksi shows the denuding of a rural peepul tree over the course of a single day. The surviving leaf is made special through the day’s relentless process of subtraction.

The interaction between artist and subject forms the basis of Junebum Park’s artistic practice where his hands can be found looming larger than life. In The advertisement 2004 a commercial district is bombarded with the mania of advertising billboards and logos, placed and replaced on the buildings.

In Landfall of a spectre 2007 Nathan Pohio mimics a large sea swell by using swaying movements while filming a lenticular print of a colonial ship. Looping endlessly, this ghost ship appears to be forever adrift.

In Yang Zhenzhong’s 922 rice corns 2000 a hen and a cockerel can be seen alongside a small pile of rice. How many grains of rice are there and which fowl, male or female, will eat the most? The viewer must watch to find out which of the birds will win the contest for nourishment.

‘Asia Pacific Video’ coincides with ‘The 10th Asia Pacific Triennial of Contemporary Art’, the tenth edition of QAGOMA’s flagship exhibition series in Brisbane from 4 December to 26 April 2022, as well as the regional tour of ‘Asia Pacific Contemporary’ and ‘APT10 Kids on Tour’. 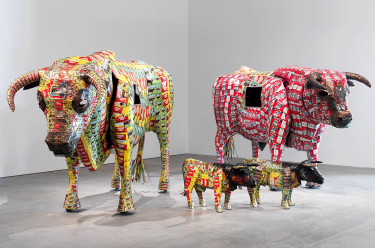