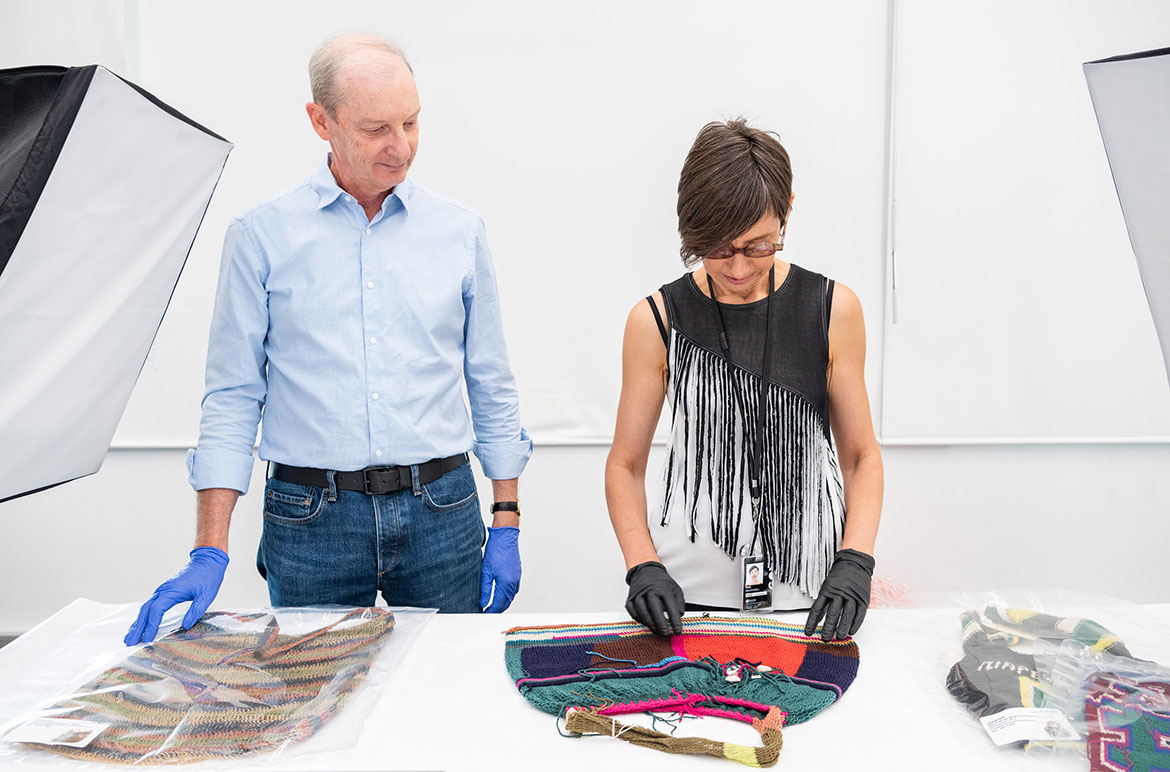 Ross Searle is an avid collector, benefactor and art museum professional who has held curatorial and leadership roles around the country, including directorship of the Perc Tucker Gallery in Townsville and the University of Queensland Art Museum, and as a selector for Papua New Guinea for the inaugural Asia Pacific Triennial of Contemporary Art. Since 2007, Ross has undertaken a generous program of giving that has particularly enriched QAGOMA’s holdings of Pacific art. Curator Ruth McDougall spoke with Ross about his career, collecting and giving.

A conversation with Ross Searle

Ruth McDougall  Ross, what inspired your passion and pursuit to collect art?

Ross Searle  I have been a collector since my late teens, an interest that was encouraged by my mother who collected antiques and paintings. I was probably 19 when I attended my first art auction in Brisbane and bought a modernist painting by George Duncan. It was a thrilling experience. I made other modest purchases of things that caught my eye, including a Thea Proctor drawing and some Lionel Lindsay wood engravings. However, it wasn’t until I went to the University of Queensland to study art history that my focus shifted to living artists and Australian contemporary art.

Ruth McDougall  What has contributed towards your interest in Pacific Art?

Ross Searle  As the director of Perc Tucker Gallery, I was the commissioner of a landmark exhibition of contemporary art of Papua New Guinea (PNG) and made my first trip to that country in 1989 to select works for ‘Luk Luk Gen! Contemporary Art from Papua New Guinea’. It was the first survey of its kind and the exhibition toured Australia, New Zealand and the Pacific. This stimulated my interest in Melanesian culture and since then I have made many trips into the Pacific, culminating in the study of Pacific collections in the northern hemisphere during a Churchill Fellowship.

Ruth McDougall  In areas like Papua New Guinea, you have collected textiles rather than larger iconic sculptural works. What inspired these choices?

Ross Searle  This was driven in part by necessity, as fibre is easy to transport and pack into a travel suitcase, but more importantly, I felt that fibre art, in all its forms, including baskets and bilums, is powerfully transformative. While traditional bilum designs are owned collectively, new images and materials have emerged that are radically transmuting these objects. My recent gift to QAGOMA includes bilum designs that range from ‘power pylons’, which demonstrate the importance of hydropower in the remote Highlands, to football team logos. Bright acrylic yarns have encouraged experimentation with designs that capture the experiences of the people of PNG today.

Ruth McDougall  You also have a strong interest in historical photographic images of Australian and Pacific subjects. What role can you see these works playing in the story of art from these places?

Ross Searle  My interest in photography came to the fore in curating the work of contemporary photographers and teaching gallery studies, for which I convened a course on contemporary Queensland photography. The recent focus on historical photography was triggered by early photo portraits of my family: I’m particularly fascinated by Jens Hansen Lundager, an émigré who left his native Denmark and settled in Rockhampton in 1879, a few years after my mother’s Danish grandfather arrived and settled further west at Stanwell. Once I realised the extent of Lundager’s legacy as a studio and topographical photographer, I became hooked on the history of this artform in Queensland and the near Pacific.

Of course, photographic images such as cartes de visite were commonly exchanged between family members and it’s no wonder that early Queensland photographs still come up at auction in the United Kingdom and elsewhere in Europe. Also, given the harsh weather conditions in Queensland, it is the photographic record that survives in the hands of these extended families.

Images of the Pacific, of course, pose questions about the role of photography and its relationship to conventional historical accounts. Through research and exhibition of these early images, there is an expansion on the predictable veracity embedded in text and oral testimony.

Ruth McDougall  For over a decade, you have donated a significant number of works to the Gallery from your own collection. What motivated you to give to QAGOMA and what role do you see donors playing in the development of public collections?

Ross Searle  My donations to QAGOMA fall into two broad interest areas: historical photography of Queensland and the south-west Pacific; and Pacific art. I’m also forming a group of works by Queensland women artists from the 1920s to the 1950s and hope to take this further in the next few years.

This interest in donating came about once I left directorial roles in the art museum sector. I have always followed the mantra ‘collect for the museum and not for yourself’ and applied this quite strenuously in my former art museum positions. Now that I am free to collect, I’m interested in questions about art practice, art collecting, the art market, and the role that donors play in shaping public collections.

Ruth McDougall  Collecting can be deeply personal. Do you get attached to works and are there any that have been particularly challenging for you to part with?

Ross Searle  I still own the first work I bought! While I’m attached to these early purchases, I’m more focused on public philanthropy and in playing a small part in helping to shape these collections.