Anne Démy-Geroe provides an insight into our APT8 Cinema program ‘Filipino Indie’, co-curated by Yason Banal, and our special presentation of 13 works by Lav Diaz.

In the early days of digital filmmaking, the portability and cost of equipment and technologies allowed filmmakers to work outside the studio system, perhaps making films that would not have previously been permissible. In the Philippines, where the film industry had been struggling, filmmakers at all stages of their career seized the opportunity to work independently and experiment with new forms of storytelling. As director Kanakan Balintagos (Aureus Solito) noted in 2005, ‘digital filmmaking has equalized the expressions of third world countries to first world countries. We are poor but not in spirit’.

In the mid 2000s, Filipino cinema started to renew its mark on world cinema: Balintagos won Best Documentary at the ImagineNative Film + Media Arts Festival for his celebration of his Southern Palawan indigenous heritage in Basal banar (Sacred Ritual of Truth) 2002; and Brillante Mendoza, who once noted that even Super 8 film was expensive for Filipino filmmakers, took home the award for Best Director at the 2009 Cannes Film Festival for his controversial study of brutality in Kinatay 2009.

The prolific Mendoza is perhaps the most recognisable director to emerge from this period, receiving widespread attention for his humanitarian and experimental approach, which blurs the distinctions between documentary and fiction. Mendoza’s Taklub (Trap) 2015, one of the most recent films in this program, is set amid the aftermath of super typhoon Haiyan, in which survivors are searching for their dead. Despite its low budget, Mendoza cast Filipino superstar Nora Aunor as the lead.

In 2006, I asked filmmaker John Torres to send me an advanced screening of his award-winning 2005 short titled Kung paano kita liligawan nang di kumakapit sa iyo? (How Can I Court You Without Ever Holding You?). Instead, emphasising the working speed typical of many Filipino filmmakers, he sent me, hot out of the editing room, his first feature, Todo Todo Teros 2006. Composed mostly of found footage of close friends, musicians and performance artists, an accompanying text said it all: ‘An artist wakes up as a terrorist . . . [the film shows] how artists can subvert a culture by the mere act of creating works that empower and transform’.

Any survey of Filipino cinema must also make mention of the work of Raymond Red and Nick Deocampo, two veterans of independent filmmaking in South-East Asia. Both began working in the pre-digital era — on Super 8 and 16mm in the mid 1980s — and have been influential to the development of a contemporary screen culture in the Philippines. Red’s short film Anino won a Camera d’Or in 2000. His feature, Kamera Obskura 2010, a homage to Filipino film history, features a re-created ‘lost Filipino film’.

Without digital technologies, the films of Lav Diaz are inconceivable. Described as ‘one of the world’s most uncompromising cinematic visionaries’, Diaz’s work is known in part for its extreme duration. He argues that Filipinos are governed by the concept of space and nature rather than time, and that his slow aesthetic reflects this. The length of his films has certainly not prevented them from receiving screenings and major awards at Cannes, Venice and the Locarno International Film Festival. Indeed, the Venice Film Festival once described him as ‘the ideological father of the New Philippine Cinema’. APT8 offers a rare opportunity to experience 13 epic works by Diaz throughout the exhibition period.

Thematically, Diaz’s films explore the history and suffering of the Filipino people. The subject might be a murder, as in Norte, Hangganan ng Kasaysayan (Norte, the End of History) 2013, or a natural disaster, as in Kagadanan sa Banwaan ning mga Engkanto (Death in the Land of Encantos) 2007. Running for almost 11 hours, and 12 years in the making, Ebolusyon Ng Isang Pamilyang Pilipino (Evolution of a Filipino Family) 2004 is considered Diaz’s greatest achievement. Intercut with newsreels of rallies and riots against the Ferdinand Marcos regime, alongside interviews with legendary Filipino filmmaker Lino Brocka discussing the political aspects of the film movement during Marcos’s period of martial law, it forms a powerful portrait of the era and its effects on the lives of ordinary people.

Diaz shares with Mendoza the characteristic of humanism, but built up slowly over time: ‘I find long, long takes more emotional and more fulfilling in terms of creating pathos’.1 Long stretches of somewhat eerie, empty landscapes or beaches, where little or nothing seems to happen, are punctuated with archival or documentary footage, monologues and interviews, in which Diaz suggests the cause of problems.

Statements such as ‘We can destroy governments now because of digital’ confirm Diaz’s position: resistance to both political and cinematic norms. Perhaps what unites the filmmakers featured in APT8 Cinema is not just spirituality, humanism or digital technology, but their passion for bringing works to the screen in spite of the constraints that often seek to silence them. 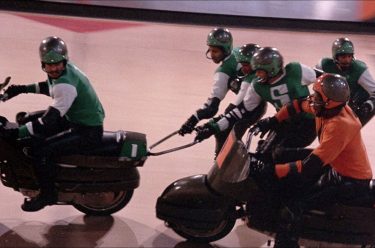