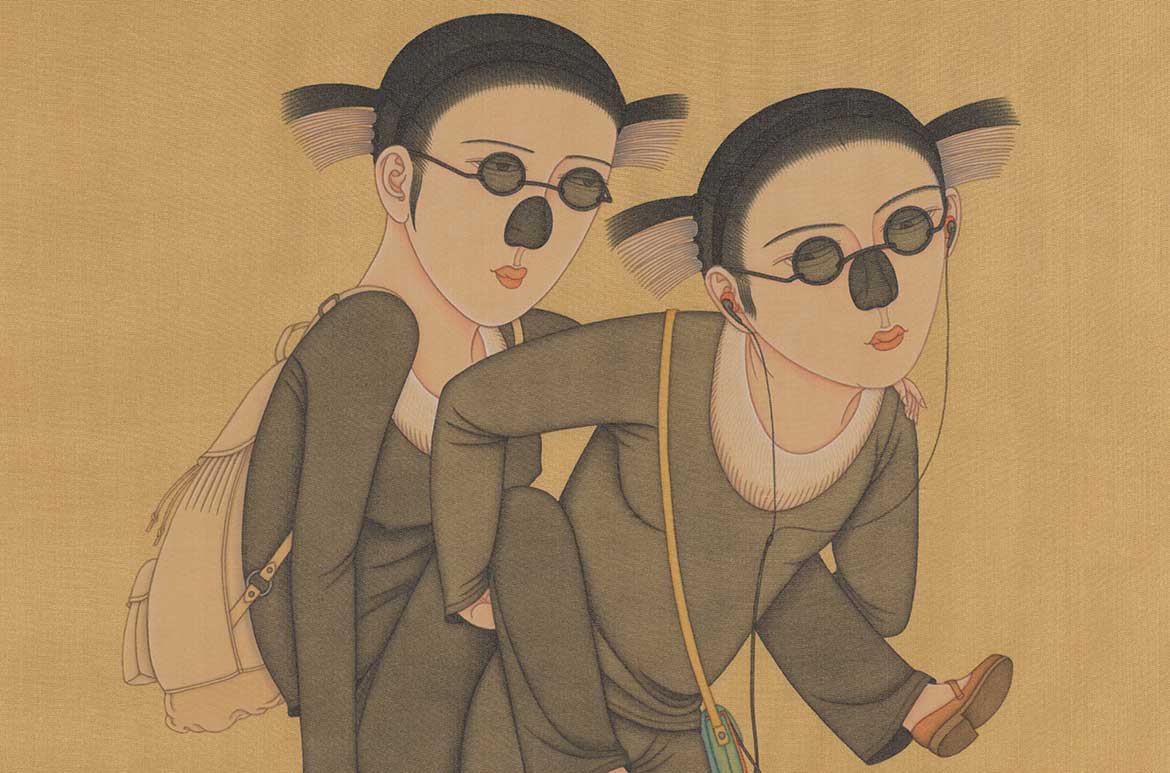 ‘Fine Lines’ presents a selection of the Gallery’s eighteenth- and nineteenth century Indian miniatures alongside works by contemporary artists from India, Pakistan, Iran, Hong Kong, Australia and New Zealand. The exhibition traces the application of meticulous brushwork in figurative painting across a broad geography and range of pictorial styles

Emerging more than two millennia ago in Han dynasty China (202 BCE – 220 CE) and enjoying enormous popularity and patronage during the Tang (618–907) and Song (960–1279) periods, the delicate technique known as gongbi (meticulous brush) was prized for its precision in depicting the natural world and its aptness for conveying narrative. Cross‑pollinating with the Buddhist art of Heian-era Japan (794–1185) and Tibetan tangka painting, its influence flowed across central Asia to Persia, where it contributed to the thirteenth century flowering of miniature painting. This, in turn, was fostered by the Mughal Empire in sixteenth-century India, where the technique was used to document historical events, and to illustrate legendary and poetic tales. After a brief period of decline, when British colonial rule destroyed the Mughal patronage system, miniature painting was revived by the avant‑garde nationalist Bengal School of the early twentieth century, contemporaneous with the technique’s modernisation elsewhere — from nihonga in Japan to Mongol zurag in Mongolia. Such a rich cultural inheritance, spanning the breadth of the Asian landmass, continues to provide a fertile source of inspiration for artists exploring figuration and narrative in a contemporary context.

Among the historical works included in ‘Fine Lines’ is a pair of newly acquired ‘company paintings’ from the late eighteenth century. These delightful depictions of travelling entertainers and their performing animals were commissioned by the British East India Company from an unknown artist in either Tanjore (now Thanjavur) or neighbouring Trichinopoly (Tiruchirappalli) in southern India. Executed with crispness and clarity, they are testament to the suitability of miniature‑painting techniques for recording everyday life before the introduction of mobile photography. They are joined by recent anonymous gifts of Kalu Ram’s extraordinary Tantric painting from two series produced in the 1970s. Art-making plays an integral role in the esoteric practice of Tantra, its geometries and iconographies enabling contemplation of the interaction of cosmic forces with body and mind. Ram (c.1940s–2010) was considered one of the most individualistic and experimental artists working in the field.

Contemporary interpretation of gongbi is represented in ‘Fine Lines’ by the work of Hong Kong artist Wilson Shieh. Based on the style of Ming dynasty painter Chen Hongshou (1598–1652), Shieh’s comically anthropomorphised animals offer wry commentary on gender relationships in Hong Kong. Complementing these are works by a group of artists from Pakistan who studied at the National College of Art in Lahore in the 1990s. Artists including Aisha Khalid, Mohammed Imran Qureshi, Nusra Latif Qureshi and Saira Wasim developed a revisionist school of miniature painting that posited it as a tool for investigating contemporary attitudes and thought. Working on canvas and in video respectively, Risham Syed and Basir Mahmood represent a younger generation’s evolution of their innovations, with depictions of a changing cityscape and the intimacy of family life.

Conflict is never far the surface when dealing with contemporary life. Sydney-based Afghan Hazara artist Khadim Ali explores the Taliban’s controversial identification with Rustam, the winged god of Persian legend, portraying them as pretenders and memorialising those who perished under their regime. Iranian-born, Dubai-based painter Rokni Haerizadeh overpaints media depictions of violent incidents and civil unrest, transforming people into surreal animals to emphasise the element of the grotesque in the original scenes. The dense compositions of Dunedin’s Kushana Bush combine miniature techniques with a wide range of influences, crowding human figures together to play out themes of power, conformism and sexuality. As unsettling as the scenarios depicted in these works may be, they are rendered with the discipline, care and creativity through which fine brushwork has found purchase in diverse cultures across the centuries — and remains relevant today.

Reuben Keehan is Curator, Contemporary Asian Art, QAGOMA
This is an expanded version of an article originally published in the QAGOMA Members’ magazine, Artlines, no.3, 2021