Every year as part of Brisbane’s Buddha’s Birthday Festival, members of Chung Tian Buddhist Temple perform a special blessing ceremony on the front lawn of the Gallery of Modern Art (GOMA), to honour a tree descended from an ancient Bodhi Tree at the site which gave birth to Buddhism. Just over 2500 years ago, a young prince from Nepal by the name of Siddhartha Gautama, renounced his family and began a journey in search of spiritual meaning. He came to a place now known as Bodh Gaya in Northern India and was sitting under a type of fig tree when he achieved enlightenment. From then he became known as ‘Buddha’, ‘the awakened one’, and the sacred tree took the name ‘Bodhi’, meaning ‘awakening’. Bodhi Trees continue to hold great spiritual significance for people around the world, not only as a symbol of enlightenment for Buddhists, but the very foundations of the fourth largest religion in the world.

An enormous Bodhi directly descended from the original tree now sits in Bodh Gaya where the event occurred, along with two other known saplings taken from the original that were planted in other temple grounds. One was planted under the sanction of Buddha in Sravasti, one of the largest cities in India at the time, and on Buddha’s deathbed he instructed that another branch be broken from the Bodhi in Bodh Gaya, and taken to Ceylon (present day Sri Lanka).

King Ashoka ruled India soon after the death of Buddha and was responsible for spreading Buddhism throughout the empire during his reign, which is heralded as one of the greatest in Indian history. His daughter is believed to have taken the sapling from the detached branch to Sri Lanka and had it planted in the city of Anuradhapura in 249BCE. One legend explains that in order to avoid the eradication of Buddhism after Ashoka’s death, his daughter hid the branch in her hair and travelled with it secretly to Sri Lanka. It was named Jaya Sri Maha Bodhi and is not only one of the most sacred trees in the world, but also considered the oldest living planted tree with a known planting date.

During the development of GOMA in 2006, a new work was commissioned from the artist Lee Mingwei. Mingwei’s ‘The Bodhi Tree’ 2006, is an ambitious, living artwork, and resulted in a sapling descended from the sacred Bodhi Tree in Sri Lanka planted at the front of GOMA. It took several years to complete but remains of great importance to both the Gallery and Mingwei, an internationally celebrated contemporary artist.

Ahead of GOMA opening, Mingwei approached Raja Maha Temple, the custodian of the ancient tree in Sri Lanka, however the priest was hesitant to grant permission, knowing only few cuttings from the original Bodhi had been cultivated throughout history. After two years, the artist was able to convince the priest that this was a sincere and respectful act in spreading the story of enlightenment and finally received the blessing. The priest and the temple then took a cutting and grew it in the temple grounds for a year before it was ready to depart, when the monks and worshippers along with the artist held ceremonies and chants to prepare the tree for its departure.

Mingwei creates works which forge a direct connection between the artist and audience. These connections are established via creative projects where gestures of trust, dialogues with strangers, cultural exchanges and the appreciation of others are foregrounded.

The centrepiece of the Bodhi Tree Project 2006 is the Bodhi tree (Ficus religiosa), the oldest species of tree to be depicted in Indian art and literature and sacred to both Hindus and Buddhists.

Mingwei’s Bodhi Tree Project is intended as a focus for gathering and contemplation and as a work that continues to evolve in its engagement with community, memory, nature and culture. The tree was finally planted in 2008 along with six marble seats that echo the heart-shaped leaves of the Bodhi, designed by Mingwei and carved from Chilagoe marble by Queensland artist Paul Stumkat. The Fo Guang Shan monks at the Chung Tian Temple in Priestdale became the local spiritual custodians since its arrival in Australia and annually perform a blessing ceremony for the tree to coincide with Buddha’s Birthday.

The Bodhi Tree has now grown to a huge and healthy tree, and remains a rare spiritual treasure and peaceful gathering place for visitors to the precinct — a living embodiment of the very beginnings of Buddhism, and a symbol of spiritual communities that have survived millennia and are connected throughout the world. This ongoing program is presented in conjunction with the Chung Tian Temple, and the Buddha’s Light International Association of Queensland, and The Australian Centre of Asia Pacific Art (ACAPA), the Queensland Art Gallery | Gallery of Modern Art’s Asian and Pacific research and publishing arm. 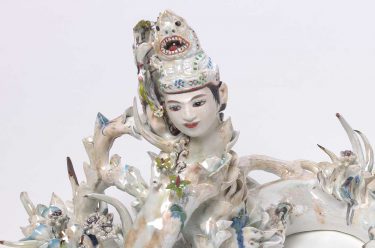