‘My Country, I Still Call Australia Home: Contemporary Art from Black Australia’ (GOMA 2013) examines strengths within the Queensland Art Gallery collection of Indigenous art and recognises three main central themes: Aboriginal and Torres Strait Islander versions of history; responses to contemporary politics and experiences; and connections to place. These themes are expressed in the three main Gallery spaces as the visual chapters: ‘My history’, ‘My life’ and ‘My country’.

Indigenous histories have emerged as a strong current in contemporary art over the past two decades. Aboriginal and Torres Strait Islander people from across the country have begun to add their histories, held in oral traditions or state and family archives, to the known, taught and accepted versions of Australian history. Some see this as a program of ‘revisionism’, where artists are heavily engaged in questioning established narratives. Others see it as part of a ‘two-way history’. ‘History wars’ and ‘culture wars’ notwithstanding, each artist records their stories, re-examining ‘whose point of view gets recorded, whose voice matters’.5

Joan Nancy Stokes’s suite of paintings are among the most powerful works in this exhibition, depicting a massacre of Warrumuungu people at Attack Creek on the Barkly Tableland near Tennant Creek.6 Why are these people being displaced from their country, marched by men on horses, then lined up and shot? Did they kill a European’s cow? Did they protest their dispossession too strongly? Does it matter? The works are emblematic of the tragedy and futility of war and conflict.

Stokes’s paintings present one of numerous accounts of massacres of Aboriginal people, held and passed on in oral traditions, but often excluded from official records. Details of other massacres continue to emerge from early frontier settlers’ personal records. The memoirs of Thomas Davis (father of author Steele Rudd), an early settler of southern and south-western Queensland, make special note of the killings of Jiman (Iman/Yiman) people following their resistance and killing of a group of settlers at Hornet Bank:

My occupation frequently took me over the Dawson country, necessitating my travelling via Hornet Bank, Booroonda and Mount Hutton. Often have I ridden over the very ground where the police came up with the murderers of the Fraser family and saw the bleaching bones of the dead blacks strewn here and there — a gruesome sight! — full-ribbed bodies, fleshless arms, disjointed leg-bones and ghastly grinning skulls peeping out of the grass.7

Vincent Serico’s final work, Carnarvon collision (Big map) 2006, tells Jiman contact history in the lead up to the Hornet Bank Massacre (1857), as passed down through his Jiman family links, relaying the history held by a people so brutally treated that they were thought by some to have been exterminated.

The survival of Aboriginal people along the colonial frontier created new problems for settler society. A huge number of displaced people from devastated societies became fringe dwellers, living off the invaders’ scraps. Those who were not useful to land barons as unpaid or underpaid labourers were moved onto state reserves and Christian missions, where their lives were controlled by church and government officials.

Dale Harding, a Brisbane-based Bidjara and Ghungalu artist, has created an arresting simulacrum of a nineteenth-century ‘king plate’, inscribed with the code ‘W38’. King plates were used by colonial authorities to identify those Aboriginal people they recognised as leaders, or appropriate liaisons — as ‘king’, ‘queen’ or ‘prince’. In Harding’s case, the plate manifests the codification of his grandmother at Woorabinda Aboriginal Mission. ‘W’ refers to Woorabinda and ‘38’ is the number that was used by mission authorities to identify her — she was reduced to an alphanumeric code on a case file. Harding’s rusted cast-iron crescent identification tag imagines Australia’s quite literally buried history. (These gorgets are often found by farmers ploughing fields.) Harding, by creating this object, has excavated his family’s history and unearthed debates about the systems that classify Indigenous Australians and that still seek to control lives.

Warwick Thornton’s 3-D video Stranded 2011 sets up another dichotomy that has left an indelible mark on Aboriginal and Torres Strait Islander peoples: country and culture versus Christianity. In Stranded, Thornton is literally crucified, bound to an illuminated cross that hovers above a waterhole in the West MacDonnell Ranges. This place is home to the Arrernte people who were perhaps the most affected by Christianity in central Australia. The setting, almost certainly a site of ceremonial importance, dramatically illustrates the contrast between Christianity and the land’s latent culture and religion. Thornton’s work also elucidates the crucifixion of Aboriginal cultures and people at the ‘humanising’ hands of Christian churches.

Archie Moore considers the same history through works from ‘On a Mission from God’ 2012, reconstructing nine important mission churches from Queensland’s Aboriginal and Torres Strait Islander reserves from the pages of miniature bibles. They examine the supporting role these churches played in the government’s control and assimilation of people and in the destruction of culture. The act of cutting, of physically intervening, into a holy book is controversial and highly political. Moore is selective about the passages he uses, constructing churches from Luke 12:47: ‘The servant who knows what his master wants him to do, but does not get himself ready and do it, will be punished with a heavy whipping.’ This verse relates to the colonial experience of many Aboriginal people in Australia, where church-controlled state reserves were used to break down existing social, cultural, political and linguistic structures.

The exhibition presents a wide range of Indigenous experiences, and Irene Entata’s reminiscences of the very same Lutheran-run community at Ntaria (Hermannsburg) present a scene of happiness and harmony. For the older generation, the ‘Mission Days’ were often bittersweet; traditional practices were lost, but everyone had a job and on the whole felt relatively content. This contrasts starkly with the social problems and deteriorating conditions numerous communities now face. Ken Thaiday’s Symbol of the Torres Strait 2003 also paints a positive picture of relations with the church in the Torres Strait, where the London Missionary Society’s brand of Christianity was introduced in 1871, and eventually widely adopted. Today, the ‘Coming of the Light’ is commemorated annually on Zulai Wan (July 1) and is the biggest cultural celebration, both in the Islands and among the large diasporic community.

A number of artists mine extensive family and state archives to reclaim and re-present their own history. In Jones’s picnic 2001, Dianne Jones continues her campaign to introduce a real Aboriginal presence to colonial Australian art. Here, Jones has substituted a photograph of her own family for a group of unnamed or imagined Aboriginal people in John Glover’s Aborigines Dancing at Brighton 1835, claiming a space in Australian art history and popular culture.

Similarly, Lesley-Anne Murray’s prints give insight into the experiences of the many Aboriginal and Islander men who wore multiple hats, working extraordinarily hard to support their families while building strong communities. Exploring her grandfather’s life, Murray’s 1994 suite references the anonymity of Aboriginal and Torres Strait Islander people right up until the late 1960s through the repeated use of the appellation ‘Black’. Black boy recalls the practice of removing Aboriginal youths from their families to work in the pastoral industry; Black soldier shares the pain of the Aboriginal and Torres Strait Islander people who fought for their country in various military campaigns, only to have their service effectively ignored until recently; Black boxer represents Aboriginal men who worked in touring boxing circuses, which were often stages for racial tensions; while Billy Murray presents a proud Aboriginal man and patriarch. 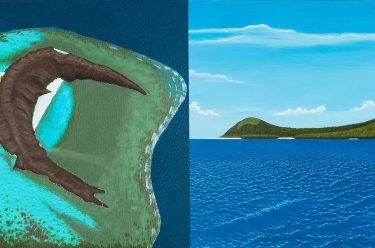