A prominent feature of the upcoming National New Media Art Award 2012 is the number of artists working with technologies that have been developed for therapeutic applications. Artists George Poonkhin Khut, Karen Casey, and Leah Heiss reflect this trend, often working in collaboration with medical research teams and industrial engineers. Through their art practices, these artists have found unique and exciting new ways to think about, and experience, the body.

In Distillery: Waveforming 2012 George Poonkhin Khut has been exploring the possibilities for an experimental relaxation system, delivered through an iPad ‘app’ prototype. This application was first developed to assist in the management of pain and anxiety experienced by children undergoing clinical procedures and has been trialed at the Kids’ Rehab Unit within the Children’s Hospital at Westmead in Sydney. Enabling the ‘sitter’ to interact with a live, abstract visualisation of the rhythm of their own heartbeat, creating pronounced wave-like changes in heart rate and breathing, Khut’s work encourages us to be aware of the world that exists uniquely within each of us.

Karen Casey’s Dream zone 2012 provides another take on contemplative states. Drawn from her work with the Brain Sciences Institute at Swinburne University, Melbourne, Casey has recorded her EEG brainwaves and utilised them to create a three screen meditative environment. Through the custom program VisEEG, developed by software engineer Harry Sokol, Casey’s neural data is rendered into a unique audio-visual installation in real time. Drawing on the artist’s own theta brainwaves. Often associated with states of dreaming and inspiration, Dream zone literally creates from the stuff of resting thoughts and creativity.

For Leah Heiss, the connection between technology and creativity has led to an interdisciplinary practice concerned with the humanisation of technology. As Heiss has stated:

‘Artists tend to think beyond technology to consider whole-of-life human experience — the users, situations, environments etc. — in which the technology will be used . . . Artists ask ‘human’ questions that allow technologies to become more sensitive to users’ needs’.

In Heiss’s work Polarity 2012, the artist has repurposed a nanotech material that is usually applied in electronic devices and advanced medical technologies, and transformed it into unexpectedly vulnerable organic forms. Captured in constellation of tiny glass vessels, the high-tech liquid lies inert until activated into an array of pulsing spikes through the activation of a concealed magnetic field.

Our next National New Media Art Award post will focus on light and movement and the works of Robin Fox and Ross Manning. 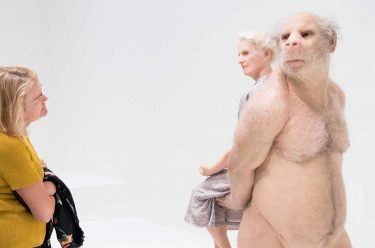