In the darkness of a cinema, the adult audience sits blindfolded, behind sits a child who describes in hushed tones a film they are seeing for the very first time. Accompanied by a soundtrack (which has no dialogue), the whispered descriptions are an attempt by the children to make sense of what they see projected on the screen.

Britt Hatzius works in film, video, sound and performance. Her work generally refers to or takes the format of the moving image, both in its technical and conceptual form and often explores ideas around language, interpretation and the potential for discrepancies, ruptures, deviations and (mis-) communication.

Amanda Slack-Smith, Associate Curator Australian Cinematheque, speaks with Hatzius about her upcoming performative work ‘Blind Cinema’ (19 – 23 September 2017) presented in partnership with Brisbane Festival, which is a collaborative and imaginative event for children and adults.

Can you tell us a bit more about how this project came into being?

The piece was initially simply an idea, of closing ones eyes in the cinema, and was followed by conversations with blind people, audio describers, a neuroscientist and then numerous try-outs with groups of children. I think maybe it was also a reaction to an overstimulation of media, visual media, and a desire to see what else there is beyond the dominant sense of sight. The audience in Blind Cinema are blindfolded and become acutely more aware of their surroundings through sound, touch and maybe even smell. During the pre-performance workshop with the children we also speak about this shift from the visual to other senses, which help them identify with the adult later sat blindfolded in front of them and the fragility that this might evoke. Choosing this particular age group (9-11) was something I discovered during the making of it, realizing that they are in the midst of discovering the potential but also limits of language, of putting thoughts into words. It is this struggle that I was interested in, of attempting to ‘choose the right words’ when faced with something that is maybe beyond words, and the power that language asserts in the achievement of this articulation – the power not only to communicate and hence share, but also the ability to ‘plant’ images into someone else’s mind.

The fluidity with which the children watch and describe simultaneously is I think also particular to this age group, before increasing self-awareness or self-reflection overshadows the spontaneity with which they narrate. Language here is also closely bound up with affective responses, the gasps, the breathing, pauses, which I feel are just as much to be celebrated as the actual words.

The act of whispering in someone’s ear is a very personal one. Can you describe the way these encounters have been observed by both participants?

The experience is indeed very intimate, even though the children are not close. Each child whispers through a rudimentary ‘speaking tube’ (or ‘listening funnel’) to two audience members sat in the row in front of them. As an audience member you hold a cone to your ear, a little like an old-fashioned telephone receiver. With the other ear you hear the soundtrack of the movie, which subtly influences your imagination as to what might be happened on the screen. The children are also not seen throughout and remain anonymous as individual narrators. Only right at the end does the audience get to see the children, but only ever as a group. This hiding in the dark behind a tube is important I think for the children not to feel judged or observed in any way. Once they enter the auditorium, the performance is very much in their hands, leaving it up to them as to what and how they choose to describe the film. As an audience member you are both aware of their collectivity – through the murmuring chorus of their whispers that spreads the auditorium as soon as the movie starts – as well as their individuality as you listen to only one child at a time.

The children narrate the film as they are seeing the film for the first time, the film has a soundtrack but no dialogue, and can you talk about why these elements are important to the experience?

Each performance involves a different group of local children, which means each child only watches the movie once. The spontaneity with which they react to the film when they watch it for the first time is central to the experience. I was not interested in generating any sense of perfection or mastering, but was looking for the fringes of articulation, the poetic potential of this immediacy and unrehearsed-ness. In this immediacy the children also find themselves in a similar position to that of the audience: of not knowing what comes next.

The soundtrack of the film is where adult and child meet in a way, both listening to the same sounds. Sometimes the child chooses to describe the sound as well as the image, almost as a reassurance to the listener that what is being described is indeed what is being heard, and generally the soundtrack of the film is carefully composed in relation to what the child might choose to describe and when – before or after the image for example.

This performance could be seen as a collaborative experience or one that hands agency from adult to child. How do you see this?

Yes, Blind Cinema as a live event is an experience where the act of watching a film becomes a shared investment: A collaborative and imaginative act between seeing children and blindfolded adults. I am inviting the audience to imagine based on what the children choose to describe: each child of course with their very own way of looking, speaking and making sense of what they see. It is a collaborative effort in that the child tries his/her best to put into words, and the adult tries his/her best to imagine.

It is a joint effort, but also an act of trust. There is the child trusting the audience not to look, not to cheat this agreement, not to raise their blindfolds and to trust the child’s narration, and there is the audience trusting the children to handle their funnels with care, to be sensitive to their potential feeling of vulnerability and most generally their heightened sense of touch and hearing. The child therefore not only assists the adult audience in their imagination, but also becomes very aware of their own responsibility towards the adult sat in front of them.

Does the film itself determine the narrative or do you find each adult and child interpret the events on screen with varying degrees of different?

The film was put together specifically for this piece and functions partly as a dramaturgy to the experience – inviting various different emotional reactions from the children while sculpting the experience for the audience – but also comes out of my own research into how we picture images in our minds. It was created based on countless try-outs to determine what might ‘work’ for both the imagining adult and the watching child. I was interested in how our minds work, how hard it in fact is to keep an image in ones mind, to join them together to form any kind of narrative that in fact any image (or thought) very easily turns into another. One word, or one slightly misunderstood word, or diversion in association or memory can trigger a completely different image, thought, reference or emotion.

This unstable imagination of ours was something I wanted to work into the film. I was looking for images that could be described in various different ways, images that could easily turn from one thing into another, or be open to interpretation. The experience for the audience was always going to be fragmentary and while the film does have an overarching narrative for the children to follow it is made with a sense of incompleteness in mind – as every audience member will anyway always imagine their own ‘version’ of the film and have their very own personal experience of this encounter.

Curious to know WHAT ELSE IS screening, plus DISCOVER MORE about the Cinémathèque program

The Gallery presents the Australian premiere of ‘Blind Cinema‘ during Brisbane Festival, developed by London and Brussels based artist Britt Hatzius. 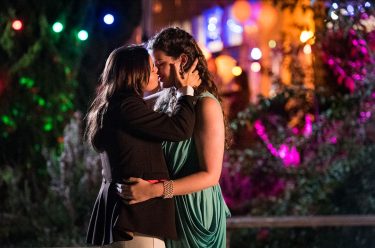 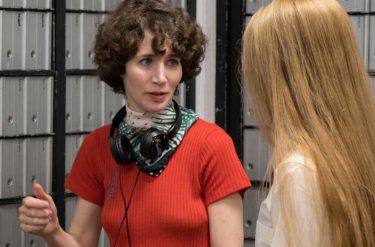