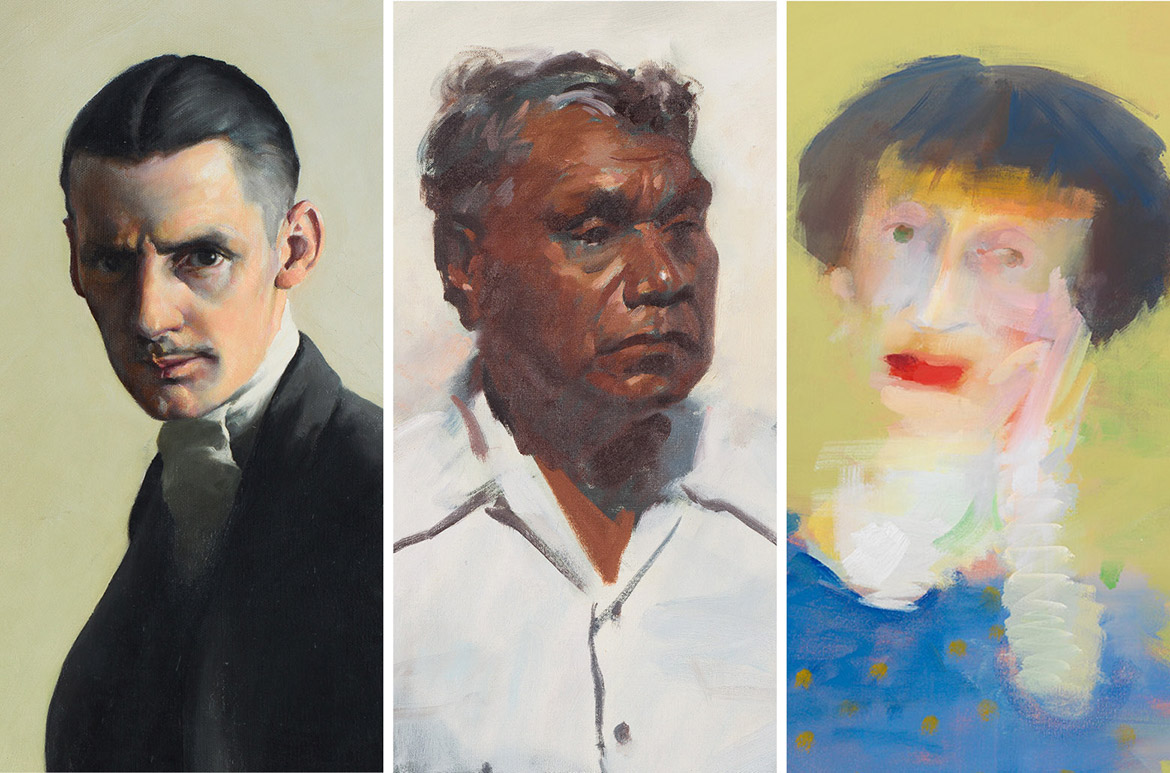 It’s been over 100 years of Australia’s oldest portrait award — The Archibald Prize — hosted by the Art Gallery of New South Wales. Since 1921 the prize, painted from life, has attracted National interest, controversy, court cases and continually sparks numerous debates, so to celebrate its centenary, we’ve made a list of works from the QAGOMA Collection with a link to the yearly prize.

Melville Haysom originally a professional musician who played violin, clarinet and saxophone in the Melbourne Regent Theatre Orchestra and in various jazz bands, moved to Brisbane when Hoyts opened the Regent Theatre in Queen Street, in the early 1930s. In 1939 he purchased a 70-acre dairy farm ‘Merri Merri’ on Mt Cootha, then an outer Brisbane suburb. At the start of World War II he joined the full-time Volunteer Defence Force and became an instructor in bomb disposal and latter mapping and field sketching. After the war he set up a private art school on the farm using the barn as a studio. Haysom was appointed Senior Instructor in Painting and Drawing at the Brisbane Central Technical College (now Queensland University of Technology) in 1948 until he retired in 1966.

A keen equestrian his 1937 Self portrait finalist in the Archibald Prize depicts the artist in the posture of the ‘Grand manner’ or ‘Swagger’ portrait, attired in tailored riding jacket, pants with riding crop. The Sydney Morning Herald article of 16 January 1937 on the Archibald Prize stated that: ‘Melville Haysom has achieved an extraordinary dramatic effect in his self-portrait, through the use of massed blacks, with a strong outline, against a light background. Perhaps the result is a shade theatrical; but at least the method has individuality in it.’

William Bustard’s Tippo Powder, Queensland Police tracker was a finalist in the 1943 Archibald Prize. Bustard met ‘Tippo’ (Timothy) Powder and established a friendship with him while Bustard was working with a World War II camouflage unit in Rockhampton in 1942. Powder worked for the Police Department in Rockhampton in the years 1942-44 before returning to his home at Woorabinda, Central Queensland. Shortly thereafter Bustard was transferred to Townsville to work at the Garbutt Airforce Base where this portrait was probably painted. A member of the Darumbal (Jetimarala) language group, Powder was born in 1914 at Yatton Station near Marlborough. He worked initially as a stockman.

‘Tippo’ Powder is depicted in the pride of his professional capacity, glancing purposefully to the left, with his broad brimmed, practical hat shading his face and his stock-whip curled around his fingers. Though this is clearly a studio portrait, the leaves intruding from the right and the impressionistically brushed ground give the impression that Powder has been captured taking a moment of rest whilst ‘on the job’ in the bush.

A finalist in the 1945 Archibald Prize, Douglas Dundas described his portrait of David Strachan as his best ‘… he was so patient, so good a sitter. He understood what it was like to get into an interesting pose.’

Dundas was awarded the New South Wales Society of Artists Traveling Scholarship in 1927 and subsequently studied in London at the London Polytechnic in 1928-29 and briefly in Paris with André Lhote. On his return in 1929 he worked for a short time as an illustrator for a newspaper, before being appointed in 1930 to the staff of the East Sydney Technical College, later the National Art School in Sydney. He remained there until 1965 as a major force in the training of several generations of Sydney artists.

David Strachan was an accomplished artist in his own right and friend of Dundas. Author Lou Klepac, in the foreword to David Strachan (1993), describes his paintings as achieving ‘a strange charged atmosphere which has little to do with surrealism, but is nonetheless close to that strange, unreal atmosphere of dreams’. Imbued with a poetic dimension, his paintings reflect Strachan’s own introspective personality.

Ivor Hele was a renowned portrait painter, who won the Archibald Prize five times in seven years. Appointed official war artist during World War II while serving in the Middle East — his paintings graphically captured the combat in which he participated as artist-soldier. Will Ashton who had been Director of the National Art Gallery of New South Wales from 1937-44 described Hele as having ‘the gift of being able, almost as though by some mental communication, to attune himself to every one of his subjects. There is no doubt that this enables him to capture ‘mood’ and this, in turn, gives his paintings vitality’.

Sir William Dargie was undoubtedly Australia’s most prominent painter of ‘academic’ portraits. He established his reputation during the 1940s and 50s, during which time he was awarded the Archibald Prize eight times. Portrait of Albert Namatjira depicting the famous Arrernte artist won the Archibald Prize in 1956.

Dargie had first encountered Namatjira in the early 1950s when he painted with him in Central Australia several times. Namatjira was ten years Dargie’s senior, and both were famous artists in Australia at the time. A mutual respect developed between the two men with Namatjira later agreeing to sit for Dargie. Dargie recalled: ‘We had agreed that he was going to sit for me. I liked his natural rebelliousness.’1 In November 1956 they were photographed in a Sydney art supply shop holding tubes of paint. The press eventually pursued Namatjira to Dargie’s studio where, half a dozen times over a fortnight, he sat in the early mornings while Dargie worked on the canvas.

Jon Molvig’s Self-portrait was a finalist at the 1956 Archibald Prize. Brooding and intense, the painting is a remarkable distillation of Molvig’s steely nature and reputation as an outsider. Painted with a palette knife, Molvig’s sculptured image is seated cross-legged on a chair with his folded arms held defiantly across his torso. Behind the chair is the guitar that he liked to play.

Although Molvig entered the Archibald Prize from 1952 onwards, it was not until 1955 that his work first appeared in the accompanying finalist exhibition. Reviewers such as Robert Hughes considered that Molvig had merited the prize on numerous occasions; however, his first and only win was his thirteenth attempt in 1966 with Charles Blackman, his lifelong friend and fellow artist. He ceased entering the Archibald after this win.

Andrew Sibley’s portrait of Dr Gertrude Langer was a finalist in the 1960 Archibald Prize. Dr Langer was the first professionally qualified art historian to reside in Queensland. She obtained her PhD in Art History from the University of Vienna in 1933 and after Hitler’s annexation of Austria in 1938, she and her husband, a qualified architect, left for Australia. They arrived in Brisbane the following year. Langer joined the Queensland Art Gallery Society in 1952 and served on the Committee between 1956 and 81. She was president of the Society in 1965-66 and 1974-75. Langer was President of the Queensland Branch of the Arts Council of Australia for 14 years and was art critic for the Courier Mail 1956-84. This work gives a clear indication of Dr Langer’s character when she was a figure of considerable influence in the art scene in Brisbane.

Sibley stated that: ‘Dr Langer was quite pleased with the portrait; only she wondered why I had taken only three actual sittings — whereas [another artist] had asked her to pose 157 times.’ In painting portraits, Andrew Sibley was unusual in seldom having sittings. The rationale behind this was that what you remember of a person is often more true to them than what you see. ‘Also it is more simplified — less clouded with miscellaneous detail’. Before he began to paint a portrait, he would get to know the person and memorized the structure of their face. He then made a few sketches, not of the whole picture, but studies of hands, eyes and posture. These were mainly to remind him of characteristic features and gestures: ‘Of course, I make things easy for myself by only choosing people who are definite types, archetypes almost.’

Artists Russel Drysdale and William Dargie thought that Sam Fullbrook’s portrait Ernestine Hill should have won the 1970 Archibald Prize in which it was a finalist.

Shy and self-conscious like many writers, Ernestine Hill, author of The Great Australian Loneliness and the novel My Love Must Wait, had refused earlier requests from William Dobell and others to paint her portrait. Her agreement to sit for Fullbrook (then a fellow resident of Buderim) shortly before her death in 1972 was influenced by their good rapport.

Isolated against a yellow field, the three-quarter figure seems to float upwards, an image of dignity and frailty, more spirit than substance. The delicateness of the body contrasts with the strength of the head with its shock of dark hair, piercing gaze and gash of red lipstick indicating a certain tenacity and strength. Independent, and a chain-smoker to the end, Ernestine Hill protested to the artist that she never wore gloves.

Also in the QAGOMA Collection

Exhibited 1940 | Will Rowell ‘Self portrait’ 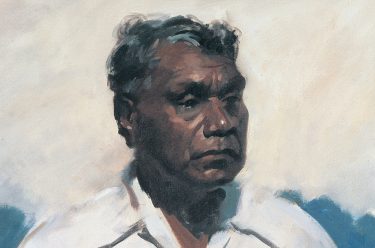