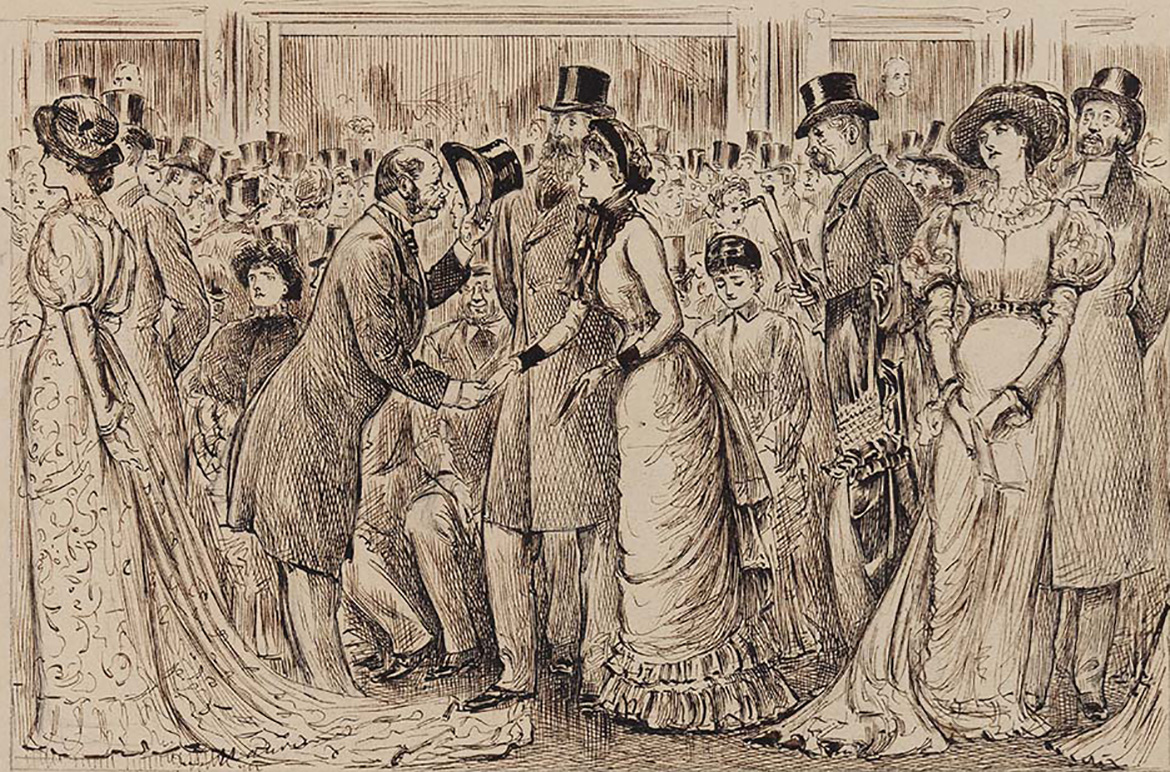 The unique aesthetics of the Victorian era in our International Art Collection, is explored through painting, works on paper, the decorative arts, and by examining the developments of Victorian England through the innovative and unconventional photography of Julia Margaret Cameron and the experimental ceramics of Doulton Pottery.

The period of Queen Victoria’s reign (1837–1901) saw the ascendancy of Britain as an imperial nation and the mechanical advances associated with the Industrial Revolution. Rich in culture, the era was also known for its strict moral values and emphasis on virtue, piety and class, with artworks often characterised by narrative, sentimental content and an illustrative style.

Julia Margaret Cameron was born in 1815 in Calcutta (now Kolkata), India, and educated in France, before she moved to England in 1848 with her husband and six children. In London, Cameron moved in a social circle that included many of the most influential scientists, academics, writers and artists of the period – Charles Darwin, John Ruskin, Alfred Tennyson and members of the Pre-Raphaelite Brotherhood. When Cameron was given a camera by one of her daughters in 1863, Sir John Herschel, astronomer and inventor of the cyanotype, provided her with technical advice.

Cameron made albumen prints from wet collodion-on-glass negatives. Given the collodion negative’s typical sharpness and clarity, she was criticised by some of her contemporaries for what they considered technical failings. However, Cameron’s photographs were simply unlike anything they had previously seen. Her trademark aesthetic was achieved through a process of trial and error. She pushed the boundaries of photography’s expressive potential, ignoring concerns about technical perfection and precise rendering in favour of evoking the romance of the pre-industrial age.

A ‘mechanical’ art, photography was widely embraced during Queen Victoria’s lifetime, with portraiture in high demand. Julia Margaret Cameron (1815–79) was born in India and first became aware of the experimental photographs of William Henry Fox Talbot through astronomer Sir John Herschel, her close friend and correspondent for many years. The daughter of an East India Company Official, she was schooled in France but married in India where her six children were born.

When her husband retired, the family moved to the Isle of Wight, off the south coast of England, and she began to experiment with photography at the age of 48. Cameron created her albumen silver prints from wet collodion glass-plate negatives and became known for her innovative and unconventional approach, closer to painting than to the descriptive realism of photography at the time.

Cameron is often associated with the contemporaneous pre-Raphaelite movement because of her focus on allegorical, literary and religious subjects. While little is known of Frances St John, the subject of this pensive and ethereal photograph, another portrait of her in the Musée d’Orsay shows her in profile with her hair shrouded in a loose veil.

It was Cameron’s practice to take multiple photographs with small variations at the same sitting. Her numerous models were family members (including her niece Julia Jackson, later the mother of Vanessa Bell and Virginia Woolf); her husband, 20 years her senior; her servants (reputedly chosen for their suitability as subjects for Cameron’s photographs); her neighbour, Lord Alfred Tennyson and his family; as well as the intellectuals and thinkers of the day who were part of her immediate circle, such as Thomas Carlyle, Charles Darwin and painter George Frederic Watts.

Lesser known are her portraits of Ceylonese subjects, made between 1875, when Cameron and her husband moved to Kalatura, and her death in 1879. Born only four years earlier than Queen Victoria, Cameron gained the respect of the leading painters of her day and established herself — in an era when it was difficult for women artists to achieve recognition — as the pre-eminent British pictorialist photographer of the nineteenth century.1

The late nineteenth century was also a dynamic and experimental period of ceramic production, and the story of the Doulton Pottery and Porcelain Company encapsulates many of the developments of Victorian England. Established in 1815 in Lambeth, South London, on the banks of the Thames, the company initially made stoneware for the domestic market, including storage containers for chemicals, spirits and other liquids. It expanded in the late 1850s to produce stoneware ‘sanitary’ products such as sewer and drainage pipes. Sir Edwin Chadwick’s Report on the Sanitary Condition of the Labouring Population of Great Britain, published in 1842, responded to multiple cholera outbreaks in the preceding decade and recommended the use of glazed sewer pipes and an arterial system, which the company recognised as a new source of revenue.

From this practical and unromantic beginning, Doulton’s factory at Lambeth later became known for its decorative ware and porcelain. Initially the decorative products were revivals of rustic sixteenth- to eighteenth-century salt-glazed stoneware, but by the late 1860s the company had become closely associated with artists from the local Lambeth Art School. Doulton encouraged creativity and innovation and acknowledged its artists, many of whom became well known.2

This period also marked the entry of many women into the ceramic industry as the centre shifted from conservative Staffordshire to London. Queen Victoria was an early admirer of Doulton ware, ordering vases for Windsor Castle and knighting Sir Henry Doulton, the first potter to receive this honour.

This Doulton Persian-style vase is typical of the company’s style and reflects the popular interest at the time in ‘oriental’ decorative elements and techniques. Its batwing handles and narrow neck echo the fourteenth-century Islamic vases unearthed at the Alhambra in Spain when restoration work began in 1828. Known as ‘Gazelle’ vases, they were widely copied throughout Europe and the United Kingdom and ranged from simple designs such as this one, with its moulded foliage and gilt lines, to the much more elaborate and decorative.

The demand for intricately ornamented stoneware began to decline, however, amid the changing social tastes of a new century and the death of Queen Victoria in 1901. A growing consciousness of public health led to salt-glazed ceramics being identified as a source of air pollution, and the company ceased production, focusing instead on porcelain.3

Blandford Fletcher’s paintings display an interest in the human stories associated with English village life, and typify late Victorian appeals to the social conscience in an age of rapid industrialisation, reform and economic hardship. Evicted presents the narrative of a dispossessed widow and her child, forced to leave their home while a top‑hatted bailiff and the other villagers look on. The location has since been identified as Steventon in Berkshire, where the same lime-washed houses still stand.

Blandford Fletcher enrolled in the South Kensington School of Art at the age of 16 and trained there for four years before travelling to Antwerp to continue his studies. On his return to Britain, Fletcher visited Cornwall, where he was briefly associated with the Newlyn artist colony, which included Stanhope Forbes. The Newlyn painters followed the French Barbizon artists in painting en plein air (‘in the open air’).

The unique aesthetics of the period can be seen across a range of media, including etchings by James Whistler, and delicately modelled mourning jewellery. The Gallery’s first acquisition, Blandford Fletcher’s Evicted 1887 (purchased in 1896) and the much-loved Aurora 1896 by pre-Raphaelite Sir Edward Burne-Jones capture important but in some ways contradictory ideas that defined the era. While Fletcher’s work portrays a crowd of onlookers watching a widow and her child being evicted from their home — a situation not uncommon for nineteenth-century itinerant workers — Burne-Jones’s depiction of Aurora (the personification of dawn in Greco-Roman mythology) moves beyond its classical associations to stand as a metaphor for the dawn of a new era.

Victorian England is often associated with an emphasis on sentiment and piety, which has since fallen out of fashion. Yet the society was multifarious and diverse, and artists responded to vast changes, such as mechanisation, scientific and medical advances, new understandings of evolution, the collapsing of distance through the invention of the railway, the growth of cities and the discovery (and colonisation) of ‘new worlds’. The era also witnessed the birth of political movements, such as socialism, the spread of organised feminism and the introduction of compulsory education. Many of the ideas and developments explored by Victorian artists continue to inspire debate today and form the building blocks of our contemporary world.

Endnotes
1 Other Victorian-era photographers of note are Oscar Gustav Rejlander, Clementina Hawarden and Lewis Carroll.
2 Doulton artists whose work is held in the Gallery’s Collection include George Tinworth, Hannah and Florence Barlow, Eliza Simmance and Eleanor Tosen.
3 The effects of salt-glazing are still highly disputed, but it has been proposed that salt (sodium chloride) can become chlorine gas in the kiln, which then combines with hydrogen in the air to be become hydrochloric acid.

North American-born James McNeill Whistler lived and worked in England and France during the latter half of the nineteenth century. Whistler was one of the first artists to take his etching plates outdoors and engrave directly onto them, which enabled him to render the conditions of the day with a sense of immediacy.

Rotherhithe is one of 16 etchings published as the ‘Thames set’ in 1871. It depicts a then seedy dockside area of South London that had been a port and landing place since the medieval period. With the construction of new embankments, demolition and rebuilding rapidly changed the architecture and character of the area. When Whistler’s prints were published, they were recognised as a valuable record of an already changing London.

Aurora, the personification of dawn according to Roman mythology, here takes the form of a beautiful young woman, clashing her cymbals to wake a sleeping city. The graceful figure draped in classical robes was based on Bessie Keene, one of Burne-Jones’ favourite models. The buildings he painted behind her are imaginary, but the background path was developed from a sketch of a canal near the railway bridge at Oxford.

Edward Burne-Jones was closely associated with the pre-Raphaelite movement, founded in Britain in 1848 by painters Dante Gabriel Rossetti, William Holman Hunt, and John Everett Millais as a rebellious student movement. They greatly admired early Renaissance and Gothic art (prior to Raphael), particularly the use of detailed symbolic elements to convey a narrative, a light-infused palette, and attention to myth and legend. Through these means, they expressed a desire to return to a simpler time before the industrial revolution and before the introduction of academic, Victorian painting favoured by the Royal Academy. 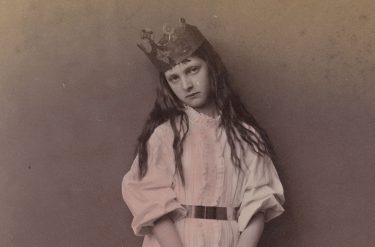