There is a magic and energy around the gathering of artists, friends and supporters at an exhibition opening, and this energy was certainly present at the opening of ‘No 1 Neighbour: Art in Papua New Guinea 1966-2016‘. The magic of that night however rested on two very special gifts.

The first was a moving acknowledgement to Country by our Indigenous Australian Art Curator Bruce McLean who filled the cavernous space of the Gallery’s Watermall with the deep rich sounds of the didgeridoo, then raised his voice in an intensely beautiful song to welcome the artists, their works and local communities to our Gallery.

Speeches – including one by exhibition sponsor Marilyn Darling –  were followed by a dramatic and unique performance by celebrated Tolai singer and musician George Telek. For the first time in 100 years, a traditional midi (shell collar) which marks the wearer as a lualua (senior Tolai man) was worn on stage by Telek. The beautiful midi was re-created by Tolai/Australian artist Lisa Hilli and marks the culmination of over six years of research into midi in museum collections.

For the performance a band of soft, downy feathers circled his brow mirroring the form of the majestic, shell adorned collar and necklet of leaves that framed his silent stare. Like the midi and bilas he wore, that focused look cut through time and space, casting a line between then and now, creating an interval which resonated with another time and place.

After this moment was captured he silently moved to the front of the crowd. With explosive force, a cloud of fine white kumbung (lime) hit the ground at his feet, billowing like a protective cloak around his form – opaque and shimmering.

As the dust settled he quietly stood, composed and still. Then his voice filled the room, gently and with warmth, purposefully holding that space open… making it a place in which the carefully hidden momentarily issued forth.

With thanks Bruce McLean and George Mamua Telek for their gifts. To Lisa Hilli for bringing the midi back to life…

Deeply grateful to you all.

LISTEN TO THE MUSIC

Bit na Ta available from the QAGOMA Store and online

BUY THE PUBLICATION IN-STORE AND ONLINE 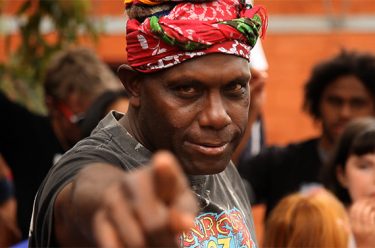