Cai Guo-Qiang is one of the most significant Chinese artists of his generation. One of the earliest figures among the Chinese avant-garde of the 1980s to gain recognition outside of China, he was also a key participant in ‘The 1st and 2nd Asia Pacific Triennial of Contemporary Art’ APT2 (1996) and APT3 (1999).

Cai Guo Qiang Fireworks (rehearsal) for APT2 / Subscribe to QAGOMA YouTube to discover the unseen and step behind closed doors to experience the Gallery like never before.

Cai’s project for APT2 was a complex body of work entitled Dragon or Rainbow Serpent: A myth glorified or feared. It was emblematic of his early career practice, which was best known for the artist’s spiritually cathartic use of explosives. Cai sought to use gunpowder to explore the parallels he perceived between the Chinese dragon and the Aboriginal Australian Rainbow serpent. This resulted in an 18-metre-long piece made up of 9 gunpowder ‘drawings’. 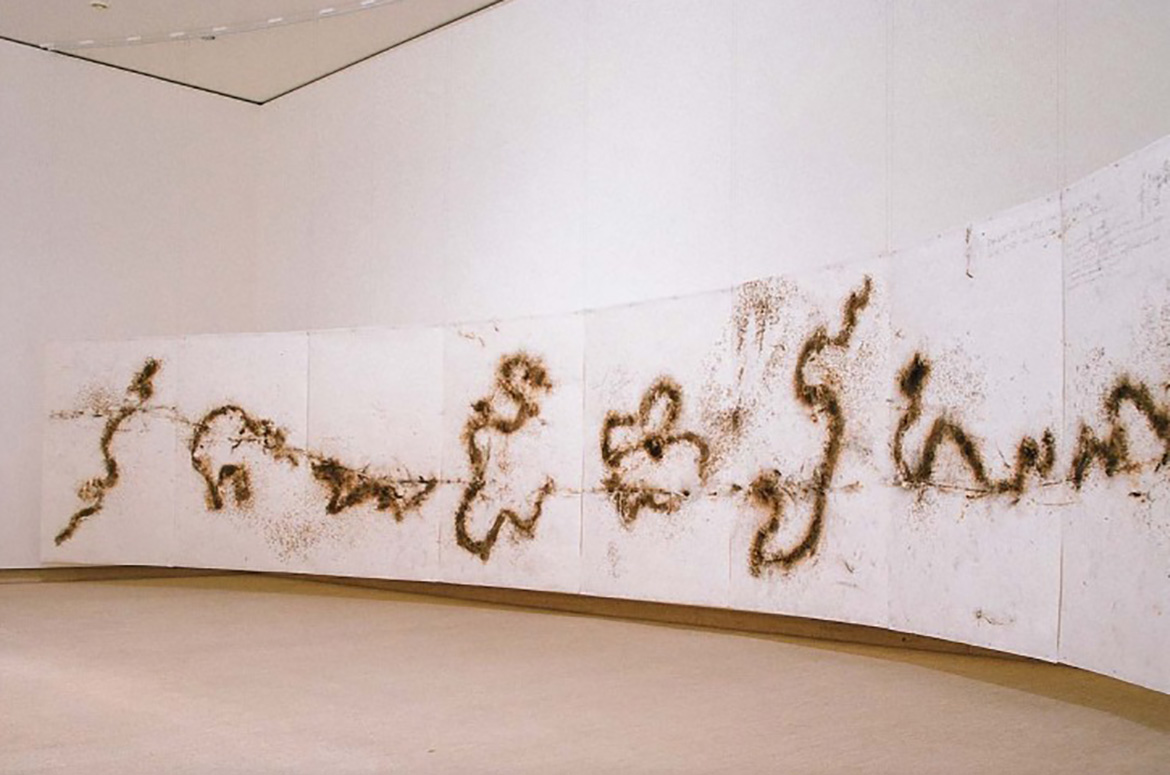 David Burnett was present for the explosion that produced these drawings and I asked him about Cai’s work.

‘It was quite extraordinary. It was APT2, and it was just ramping up to a calibre of work that was clearly a huge leap from what we’d done before. It was quite early in Cai’s career, and every new work was — well — a new work. He was still coming to terms with the properties of gunpowder. It was chancy and it was unpredictable, and I guess that was what was so exciting about it.’

‘A number of trials and tests were carried out, so there was a step by step process leading up to it. It took place in the car park of the Performing Arts Centre, which was chosen because it had doors that could be opened to the open air, so it was one of the few places safe enough for this event. It was early morning, with dozens of people on deck. There were fire professionals on hand and regulations were strictly observed.’

‘What was required was to control the burn after the gunpowder had gone off. It was of course on paper, overlain with other pieces of paper and with weights. It was really about timing. The paper had to be removed very quickly to let air in, so that the gunpowder didn’t continue to smoulder and burn through the paper. Everybody was at different points along the drawing to run across the paper with bare feet to pick up the weights and to get the paper off to stop the burning. The idea was to scorch the paper with a brown and black fumage.’ ‘The explosion was noisy — surprisingly noisy! I knew it would be loud, but not that loud. The tests had all been conducted outside, but because it took place in a low-ceilinged concrete car park, it really amplified the noise. And none of us had really anticipated that there would be so much smoke. There was a point when it all went off that I couldn’t see where anybody else was.’

‘We had some photographers documenting it, which is great to have now. You realise the value of that kind of archival documentation. At the time you just think, oh well, we better do it, but now, this far down the history of this project, you realise how important that is.’

The twentieth anniversary of APT presents an opportunity to reflect upon the unprecedented transformations that have occurred in Australia, Asia and the Pacific over the past two decades.