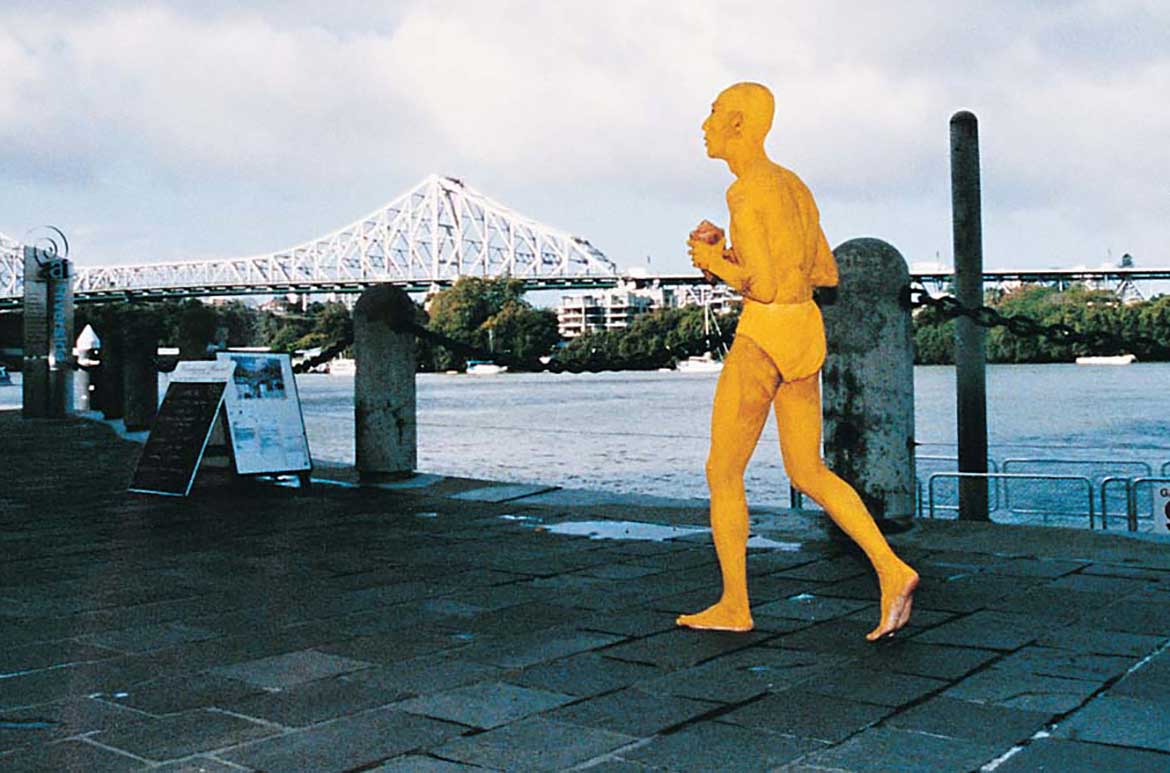 We are deeply saddened to learn of the passing on 3 March of the much-loved artist, organiser and mentor to many, Lee Wen (1957-2019). A central figure in Singaporean contemporary art for three decades, Lee contributed the performance Journey of a yellow man no. 13: Fragmented bodies/shifting ground 1999 to ‘The 3rd Asia Pacific Triennial of Contemporary Art‘ (APT3), and in doing so created one of the abiding images of the exhibition series.

Born in Singapore in 1957, Lee Wen turned his back on a banking career to pursue studies in art at La Salle-SIA College of the Arts and City of London Polytechnic. Alongside Amanda Heng, Koh Nguang How, Zai Kuning, Vincent Leow and others, Lee Wen became one of the earliest members of The Artist Village (TAV). Founded by the performance and installation artist Tang Da Wu in 1988, TAV functioned as an open studio promoting interdisciplinary experimental practice, highly engaged with the world around it. With the closure of the original village in 1990, TAV became an itinerant entity no less committed to creative interventions into the fabric of Singaporean social life.

It was during this period that Lee Wen developed the Yellow Man, his best-known performance persona. Stripping to his trunks, Lee Wen would coat himself entirely in yellow paint, exaggerating his Chinese-Malay ethnicity, and undertaking actions in a variety of spaces, from conventional galleries to city streets. For his participation in APT3, Lee Wen’s Yellow Man carried an animal heart from a suburban home through the Brisbane CBD to South Bank. Splitting the heart on the steps of the Gallery, he uttered with simple sincerity the words ‘Open heart’. An unceasing interrogator of social and cultural norms, Lee Wen offered the following reflection:

The sun was rising over the riverside where we waited with last night’s revellers by the anchored ferry. The sky was turning brighter as birds began to greet the morning with their songs, I rejected all manner of intoxications and watched the performance of lovers communicating their inner desires through pure and simple actions, faded meanings and re-solidified aspirations. I bid unemotional goodbyes to all beneath the shower of love and left, to experience unexpected rebirths again yet again. Closing the door, did I not leave those nightmares behind? Those mistaken glories, re-invented into memory, imagined as histories. How many times? How many times more?

During an effective ban on performance art in Singapore that lasted the best part of a decade from 1994, Lee Wen staged the Yellow Man’s journeys in a range of international locations, ever broadening interpretations of his colouring as he moved between cultural contexts. He travelled widely, participating in activities of the transnational performance collective Black Market International as well as the Command N group in Tokyo, where he also taught at the Tokyo National University of Fine Arts and Music. In December 2003, the Future of Imagination festival, which Lee Wen organised with fellow artist Jason Lim for the Substation arts centre amid shifting cultural attitudes, effectively marked the return of performance art to Singapore, and was staged regularly until 2011.

Lee Wen accumulated an immense history of exhibitions, performances, workshops and teaching projects, participating in the Singapore Biennale (2014), Busan Biennale (2004), the Havana Bienal, (1997), Gwangju Bienniale (1995) and the 4th Asian Art Show, Fukuoka (1994), among many, many other events. In 2005, he received Singapore’s highest cultural award, the Cultural Medallion, for his services to contemporary art. His particular combination wit, humility, generosity, philosophical complexity and artistic vision will be greatly missed.

Lee Wen discusses ‘Journey of a yellow man no. 13’