‘The 9th Asia Pacific Triennial of Contemporary Art’ (APT9) Opening Weekend culminated in a symposium with visiting artists, curators and academics from Australia, the Asia Pacific and further afield. Zara Stanhope, with Tarun Nagesh and Ruth McDougall, outlines some of the pressing ideas that arose in the development of the current exhibition and formed the platform for discussion, and reflects on the questions that will continue to inform our understanding of art and culture throughout this diverse region.

The Asia Pacific region today looks very different to how it did in 1993, at the time of the first Asia Pacific Triennial. In the current climate, in which countries across the region are navigating competing ideologies of nationalism and globalism, the Gallery continues to consider how best to host and present the work of artists who raise their voices against complex geopolitical, economic and environmental forces. ‘The right response’, said QAGOMA Director Chris Saines, in his welcome to APT9 symposium delegates ‘is to continue to provide an open and safe platform for art and artists to flourish by widening the audience for this discourse’.1

Chis Saines, QAGOMA Director and Zara Stanhope, Curatorial Manager, Asian and Pacific Art welcome researchers, artists and and curators to the all-day APT9 symposium and introduce some of the key areas of thought about contemporary art in the region, and its histories, conditions and voices.

The symposium was structured around three core topics that arose during the planning stage of APT9 and informed the current exhibition: transregionalism and connections between art and artists across Asia, Australia and the Pacific; the question of ‘Who speaks?’, including self-determination and cultural resilience; and the shaping of contemporary art histories in the Asia Pacific. Each session opened with an introductory speaker and was followed by a panel discussion representing a diversity of voices.

Connectivities: Conditions for contemporary art in spaces of trans-regionality

The first session focused on questions of how contemporary art is framed around regional definitions, boundaries and transnational relationships.2 The discussion highlighted the artistic opportunities and limitations affecting the creation and mobility of art in the Asia Pacific region today, how funding sources develop transnational possibilities, and how Australia, and APT9 in particular, has been able to nurture unique inter-regional relationships and dialogues. The significance of shifting borders — especially with regard to traditions, definitions and language — the movement of people, and privileging collaborative and local knowledge were all pertinent to the discussion.

One idea that directed the panel’s thinking was the notion of not one but multiple Asias. Greg Dvorak, an academic who grew up between the Marshall Islands, United States and Japan and now lives in Japan, commented that the idea of region, when imposed from the outside — from the Pacific rim looking inward — makes it easy to identify ‘at least ten different Pacifics’. Therefore, he maintains, scholars, curators and artists need to respond by looking to the past and at these roots of indigeneity. ‘It’s been very moving’, he continued, ‘to be part of the opening of APT and to see the Welcome to Country . . . to see how these connections that have always been there are being revitalised, revisited and re-understood’. Through the migration and movement of people, and these translocal connections, ‘the knowledge is already there; [it’s a matter of] reactivating it, and art has a space to do that’.3

Who speaks: Self-determination and cultural resilience on a global stage

Following a screening of Karrabing Film Collective’s documentary film Riot 2018, the second session highlighted the conditions that either enable or constrict the participation of individuals and communities within global contemporary art discourses and platforms. Kabi Kabi and Wiradjuri artist and producer Alethea Beetson framed the topic with her presentation on the ongoing politics of representation and white privilege within institutions as it applies to those not in the room — elders, ancestors and youth — and she raised the question, ‘Whom do we serve when working within institutions?’ A panel, chaired by Australian South Sea Islander curator Imelda Miller, reflected on the different contexts in which artists are creating, and the ways in which creative practice can be used to assert indigenous perspectives and ways of knowing.4

Numerous structures and conditions challenge the participation of artists and arts professionals within the contemporary art world. The questions of language, visibility and who listens — as well as who speaks — are ongoing concerns in countries that were colonised by the English-speaking world; English has become the lingua franca of contemporary art, a fact that hides a multiplicity of languages spoken in small but defined parts of the globe. In the later plenary session, Katina Davidson, the Gallery’s Assistant Curator of Indigenous Art, stressed the imperative of recognising the many nations and languages within our own land: in fact, our continent itself is transnational, and more than 200 Indigenous countries comprise the land mass that we call Australia.5

The third session examined how art histories are being interpreted, questioned and rediscovered from a range of institutional and organisational perspectives within the Asia Pacific region. A paper given by Beijing curator Carol Yinghua Lu explored Socialist Realism in China in the final years of the Cultural Revolution and into the early 1980s as an example of how art history can be politicised and recontextualised. Lu emphasised the need to question how histories are written, and the paramount importance of context, which became the launching point for the panel discussion that followed.6 In the context of Aotearoa New Zealand, for instance, Māori time is complex and does not conform to Western concepts of linear history. ‘There’s no sense of a past, present or future’, explained Deirdre Brown from the University of Auckland. ‘Everything’s just moving around and everything can be interpreted according to any of those paradigms.’7

The unique focus of APT across Asia, Australia and the Pacific highlights the distinctive dynamics of the region and generates questions that a one-day event can only begin to address. However, the symposium nonetheless articulated some of the important and urgent concerns that underline the work of artists, curators and their communities, including sovereignty, visibility, self-determination and agency. These have implications for art and art-making across the region, and remind us that art is part of life. Thinking more deeply about such connections drives the curatorial approach to APT, and these discussions will be a provocative starting point for the next and future iterations of the Asia Pacific Triennial.

In Tongan culture, ‘Punake’ is a term used to describe artists who compose poetry and songs and choreograph them for performance. The word comes from puna (to fly) and hake (on high). Latai Taumoepeau is a contemporary Punake — a body-centred performance artist whose powerful artistic practice tells the stories of her homelands, the Island Kingdom of Tonga, and her birthplace of the Eora Nation, Sydney. Working in durational performance and documenting it through photographs, she addresses issues of race, class and the female body. 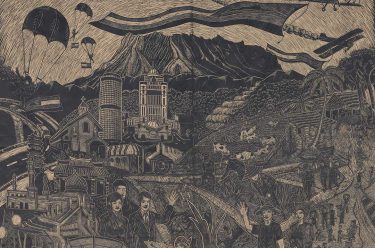