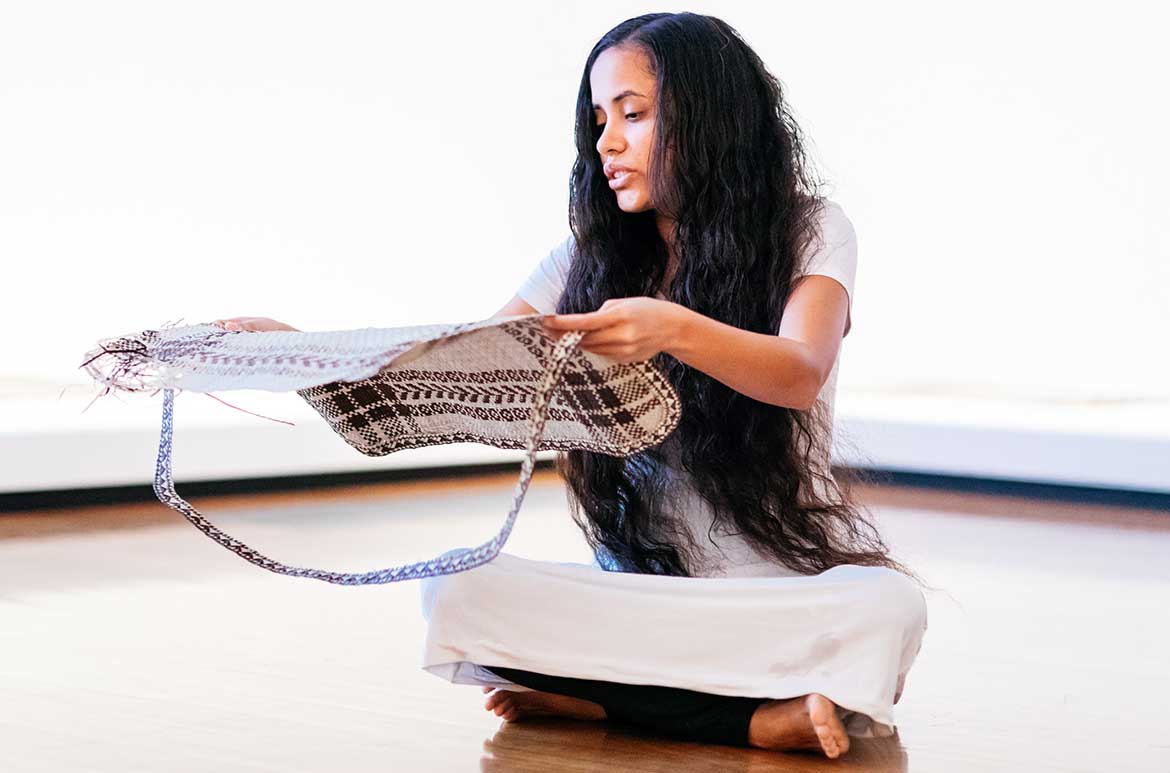 Known internationally for its history as a nuclear testing site, and home to one of America’s most advanced military bases, the Republic of the Marshall Islands is also on the frontline of the global struggle against climate change. Yet, intertwined within the narrative of human disregard, and an increasing susceptibility to the dire effects of global warming, the people of the Marshall Islands are writing a story of their own — one distinguished by collaboration, resilience and hope. Kathy Jetñil-Kijiner is one of many community members and artists giving voice to this story on a global stage.


Jetñil-Kijiner is a spoken-word poet who was chosen to address the UN Climate Summit in New York in 2014. She has since spoken and performed around the world on related issues. As has become the norm for an increasing number of Marshallese, the pursuit of education and other opportunities means that she has spent most of her life ‘off-island’. Even so, the approach she takes to her work manifests a marked sense of responsibility to her homeland, and a determination to better equip herself to tell the story of its people.

In the lead-up to ‘The 9th Asia Pacific Triennial of Contemporary Art’ (APT9), Jetñil-Kijiner became interested in the recent revival of Marshallese jaki-ed weaving and the dynamics of the weaving circle as important symbols of cultural resilience. A unique opportunity to participate in a 21-day weaving circle was made possible through a partnership between QAGOMA and the University of the South Pacific.

In a traditional hut located on the university’s new Majuro Campus, overlooking the expansive and idyllic lagoon, 13 expert weavers gathered from atolls across the Marshall Islands, working together to complete a series of special jaki-ed mats. The hut has no walls, making it ideally suited to the needs of the weaving circle. The women gather here to support and encourage each other. They weave as their conversation, riddled with laughter and wisdom, flows through and beyond the space. The hut is open in more ways than one — open to new ideas and innovation, the gaze and curiosity of bystanders and admirers, the questions and imitation of family, and interaction with the natural environment. It is a sacred space, where collective knowledge is both honoured and generated.

Related: The wild world in APT9


Jetñil-Kijiner’s spoken-word performance, commissioned for the opening weekend of APT9, is rooted in what she experienced in this space completing a mat of her own, while working under the instruction of master weaver Terse Timothy. According to Jetñil-Kijiner:

I was grasping at a new art form — I told myself this. A friend said, ‘You’re going back to your roots’, and I scoffed at the simplicity of this statement. It was trying, and failing, and trying again, and connecting, only slightly. There was never an arrival. There was a grasping. ‘There’s a gap over there.’ There’s a gap between the words I weave inside my own head . . .1

Performance: Lorro: Of Wings and Seas 2018

In her work — performed in the Gallery of Modern Art (GOMA) and recorded for APT9 — Kathy Jetñil-Kijiner uses the symbolism of the weaving process and weaving circle to explore how women’s roles and identity are shaped by Marshallese culture, the nuclear legacy and a climate-threatened future. Its closing segment draws inspiration from the Japanese dance art form of butoh to capture the metamorphic influence of the nuclear legacy on the bodies of women. This work is a weaving of words and movement. Each strand connects local wisdom with discourses of global relevance, opening the weaving circle to a new audience in APT9 — a circle defined by the open flow of learning, creativity, and a spirit of humble resilience that connects and characterises the weavers of the Marshall Islands.

Performance: She Who Dies to Live 2019

SUBSCRIBE to QAGOMA YouTube to go behind-the-scenes / Produced by the Smithsonian Asian Pacific American Center, and presented in conjunction with the PAA XIII International Symposium and QAGOMA

She Who Dies to Live is a multimedia spoken word experience asking us to consider how we tell the lives of Pacific women in our societies. With an all-female cast representing Samoa, the Marshall Islands, Fiji, and Hawaiʻi, She Who Dies to Live reimagines formative stories of the Pacific into a contemporary epic.

The Australia premiere of this production at the Gallery of Modern Art, Brisbane on Tuesday 26 March 2019, features a collaborative performance by Jocelyn Kapumealani Ng, Kathy Jetñil-Kijiner, and Terisa Siagatonu, with contributive writing from Jahra ‘Rager’ Wasasala, and direction by Lyz Soto.

This immersive performance explores the survival of culture and story in the face of colonization, nuclear testing, militarism, diaspora, and climate change.

View the Jaki-ed weaving display and more on Level 3 at the Gallery of Modern Art until 16 June 2019 during ‘The 9th Asia Pacific Triennial of Contemporary Art’ APT9: Extended. 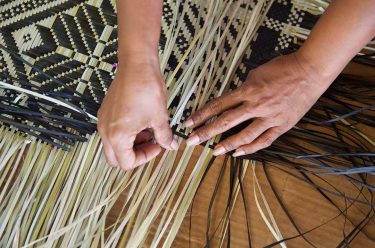 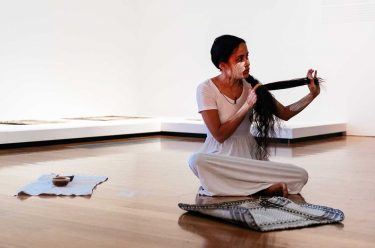