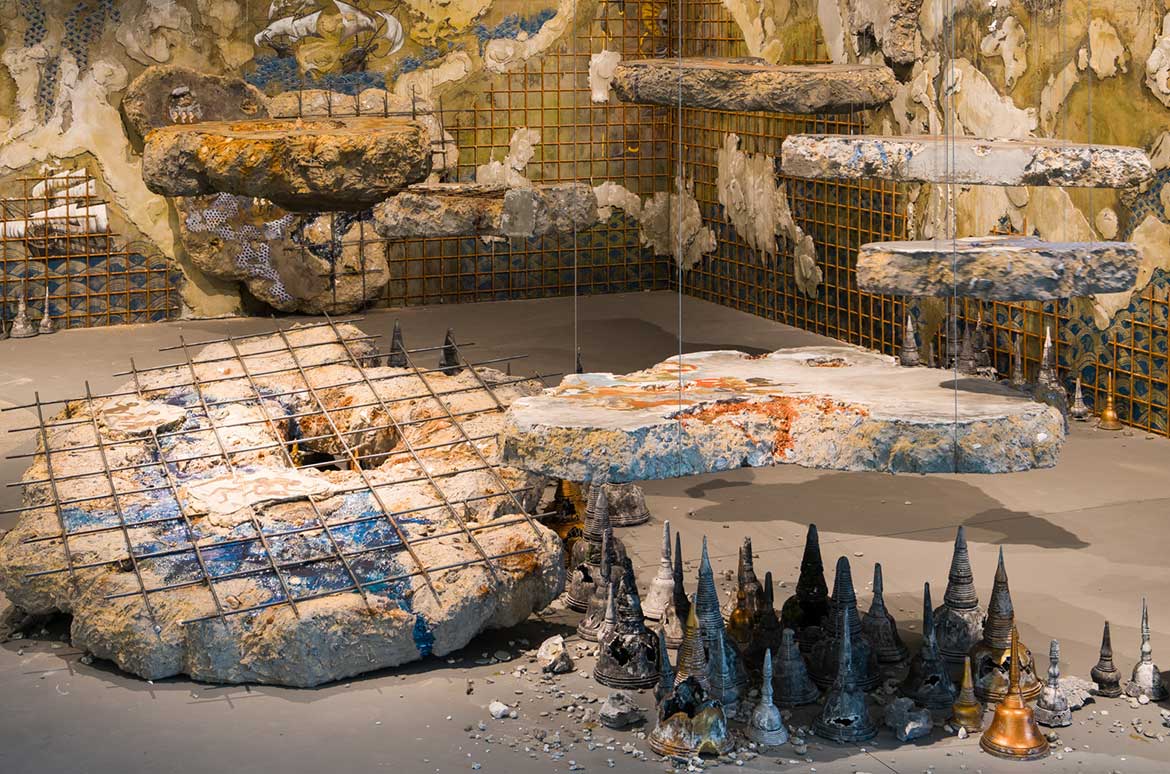 Pannaphan Yodmanee visited her local Buddhist temple often as a child, and it was here, at the age of ten, that she learnt to paint. Buddhist shrines and temples in Thailand are places where art, religion, history and life intertwine. Ancient stories, histories and cosmologies are depicted on their inner walls and on murals in their grounds. As old paintings and murals decay, they are repainted and restored so narratives are preserved as towns and cities evolve.

Taught by a monk and extensively trained in traditional Buddhist painting techniques, Yodmanee has formed a deep understanding of the philosophies and cosmologies inherent in vernacular Buddhist art. Unencumbered by traditional conventions, she applies this knowledge in her work to reveal interactions between symbolic imagery and the world outside the sacred, and, in doing so, develops new social and artistic contexts to consider the significance of these narratives. Yodmanee’s dense installations are eruptions of materials and structures. Varying in size and texture, her works are composed of exposed structures and fields of detritus shrouded in small, vivid paintings and carefully layered wall treatments. Her installations resemble demolished urban sites, with stories composed along uneven surfaces and interspersed with miniature handmade objects. She creates storyboards of journeys and fables in landscapes of broken concrete and exposed girders. They are embedded with vivid temperas, gold pigments and mineral paints, and feature crumbling stupas and Buddhist icons that merge spirituality, the cosmos and local histories. The sprawling congregation of materials and images resembles a mural lying in ruin, with fragmented figures and motifs forming small chapters of a story that continues amidst the rubble. Yodmanee’s works are as much about material and structure as they are about spirituality and narrative, and are based around three elements: rocks and stones from the artist’s hometown representing the natural world, found objects and broken fragments of buildings slated for demolition, and miniatures of Buddhist icons created by the artist using experimental techniques.1 Along with illustrating Buddhist narratives, Yodmanee chronicles the formation of individual and regional identities, and explores South-East Asian histories of migration and conflict, and the destructive tensions within society.2

The rough, industrial aesthetic of her work lies in stark contrast to the precise painting style Yodmanee was once taught in the quiet confines of her local temple, yet, somehow, harmony is achieved between the hard-edged, large-scale debris and the delicate paintings and sculptures scattered throughout. Her installations offer a new platform and contextualisation for Buddhist art and practice, a direction that has been influential in the development of contemporary art in Thailand since the early 1990s, as Thai artists have sought new possibilities to express faith in experimental forms of contemporary art.

Related: Pannaphan Yodmanee and ‘In the Aftermath’

In her use of urban materials, Pannaphan Yodmanee highlights the cycle of destruction and renewal in our contemporary world, which, in Thailand, parallels the pervading presence of Buddhist belief and custom with the continual development of cities. Her work conjures the power of faith to transcend the destructive forces inherent in modern development, and offers a place to engage with the constants of history and spirituality in an ever-changing environment.3

In 2019, as we celebrate the 40th anniversary of the Foundation, Thai artist Pannaphan Yodmanee’s extraordinary work In the aftermath 2018, commissioned for ‘The 9th Asia Pacific Triennial of Contemporary Art’ (APT9) is the subject of our 2019 Queensland Art Gallery | Gallery of Modern Art (QAGOMA) Foundation Appeal.

The Foundation’s 40th anniversary is an opportunity to reflect on the generosity of the Gallery’s many supporters who have contributed over the past four decades. Find out more about the QAGOMA Foundation and the 2019 Foundation Appeal.

With your support, the 2019 QAGOMA Foundation Appeal will bring this significant work into the Collection. It will be a remarkable APT9 acquisition and addition to QAGOMA’s renowned collection of contemporary Asian and Pacific works, by one of the region’s rising stars.

Read more about Pannaphan Yodmanee in The 9th Asia Pacific Triennial of Contemporary Art available online or in store. The publication represents an important and lasting document of the current artistic landscape of Australia, Asia and the Pacific.