Now in its 4th year – the World Science Festival in Brisbane explores and celebrates the relationship between science and art. Science and art are more closely related than you might think as both attempt to understand and explain the world around us. Both scientists and artists strive to see the world in new ways, explore and then communicate their insights.

The World Science Festival Brisbane takes place between 20 and 24 March 2019 with the Australian Cinémathèque at the Gallery of Modern Art (GOMA) presenting ‘Far From Home: Cinema’s Fascination with Space’ from 21 to 23 March.

In the 50 years following the first moon landing by the Apollo Lunar Module Eagle on July 20, 1969, humans have sent crafts to other moons and planets, filled Earth’s orbits with satellites and probed the universe to search for our very beginnings. Since the beginning of cinema we have been fascinated by the vast unknown, and the films selected for ‘Far From Home: Cinema’s Fascination with Space’ are bold and fantastical imaginings of journeys to the moon, life on Mars and the psychological impact of travelling through space. Browse the film program to see a range of science fiction films, from one of the first ever made, A Trip to the Moon, created in 1902 by French illusionist and film director George Méliès to a selection of the winners of NASA’s 2018 Project Mars short film competition.

In Sunshine 2007 the sun is dying, and humankind is dying with it. The last hope is a spaceship and crew carrying a device that will breathe new life into the star. But deep into their voyage, out of radio contact with Earth, the crew’s mission starts to unravel.

There’s a reason why many directors only make one science-fiction film. It’s because you exhaust yourself… spiritually.  The interesting thing is that the more commercial sci-fi films tend to go for Hell in space. But maybe it’s more ambitious to aim for Heaven… Danny Boyle (Director)

Spike Spiegel and the crew of his spaceship, Bebop, an intrepid band of bounty hunters, land on Mars in the year 2071 chasing an enormous cash reward.

Exclusive to QAGOMA, the latest chapter in the Gallery’s flagship exhibition series ‘The 9th Asia Pacific Triennial of Contemporary Art’ (APT9) includes new and recent work by more than 80 emerging and established artists and collectives from more than 30 countries. APT presents a wonderful opportunity for visual artists from across Australia and the Asia Pacific to collaborate and share works that are a powerful expression of their cultures and experiences.

Many of these artists share their concerns with the topics of the 2019 World Science Festival. Besides the themes such as life on earth and beyond, and the story of space that the Australian Cinémathèque are presenting in ‘Far From Home: Cinema’s Fascination with Space’; explore the challenges confronting humankind in the face of over-population and escalating climate change, and how we maintain a delicate balance between nature and humanity’s progress through the art on display in APT9.

Cao Fei’s Asia One depicts a near-future scenario that offers a perspective on the impact of automation, artificial intelligence and advances in logistics on human relationships.

Cao works in video, installation and digital media and explores daily life in a rapidly changing world. Cao’s latest project focuses on the futuristic logistics hub of online retail giant Jingdong, or JD.com, one of the most technologically advanced manufacturing and distribution facilities in China. What role does these present-day glimpses of sophisticated automated logistics with mass consumption, globalisation and technological acceleration play in the evolution of industry. The company’s operations suggest myriad possibilities, but also significant changes for the daily experience of its workers.

Logistics — the link that binds contemporary industries in a global marketplace — might also connect the present and the future.

In collaboration with Dr Uncle Stan Grant Snr AM Jonathan Jones’s untitled (giran) 2018 is reminiscent of a map of intersecting wind currents, evoking birds in flight, and draws on the culture, language and philosophy of the Wiradjuri people of New South Wales.

Understanding wind is an important part of understanding country. Winds bring change, knowledge and new ideas to those prepared to listen. Jonathan Jones

Giran describes the winds, change, as well as feelings of fear and apprehension. Traditional tools are at the heart of the artwork, made of roughly 2,000 sculptures and a soundscape. Bound to each tool with handmade string is a small bundle of feathers – found treasures – carefully gathered and sent to Jones by people from across the country.

The circling murmuration of flying ‘birds’ is composed of six tool types. Like the winds, Wiradjuri philosophy divides them into male and female groups: bagaay – an emu eggshell spoon, bindu gaany – a freshwater mussel scraper, waybarra – a weaving start, bingal – a bone awl, dhala-ny – a wooden spear point, and galigal – a stone knife. Each tool has limitless potential.

Jones worked with family, Wiradjuri community members and long-time artistic collaborators to make the tools and to craft the feathers into tiny ‘wings’. The process of making – gathering and transforming the raw materials – brings people together, enhances connections to land, culture and language, and strengthens ties to generations who have passed on. 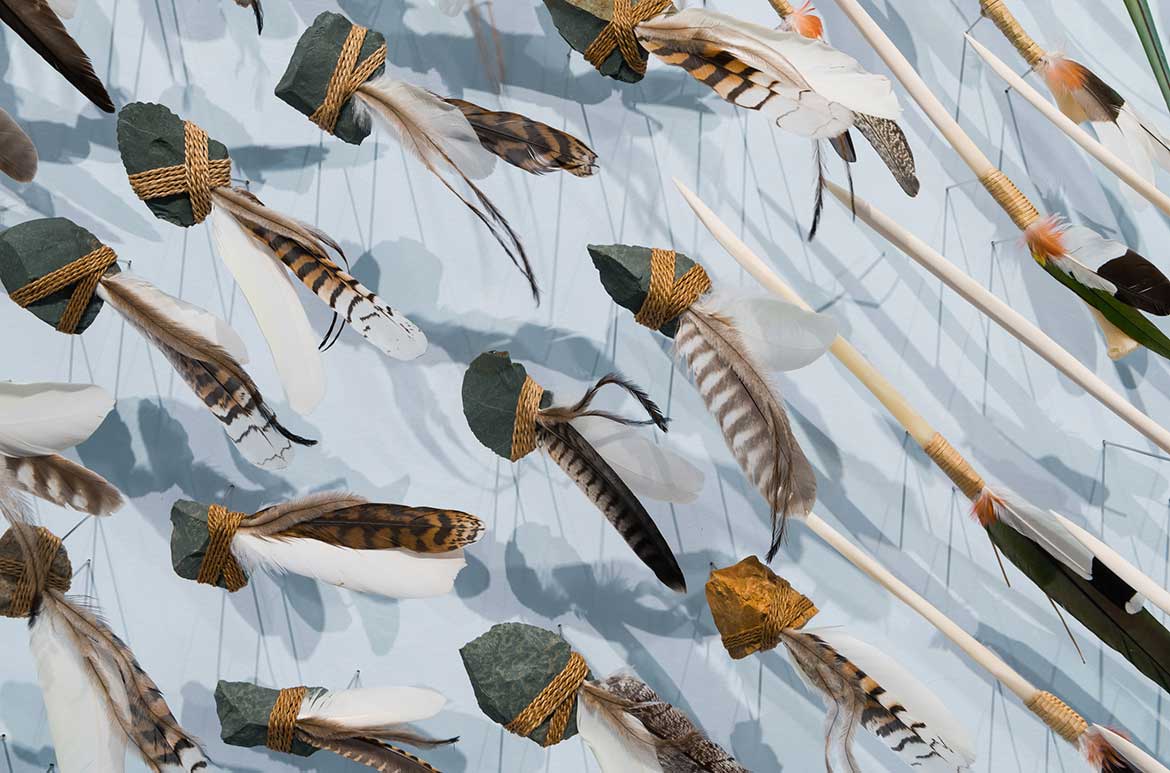 Contemporary photographer Anne Noble’s Conversatio: A cabinet of wonder is not only created by the artist after collaborations with scientists, it also encourages appreciation of how art and science, when bought together, are productive in generating knowledge on our world from different perspectives.

Noble has created a multi-part project at the heart of which is Conversatio: A cabinet of wonder, a functioning beehive or ‘living photograph’. Bees can be observed entering the Gallery, before disappearing inside the cabinet and going about their normal activities; they are also visible when the cabinet is opened. Noble’s works form a visual ode to an insect symbolic of our world’s wellbeing – their complex ecosystem is at severe risk of collapse as a direct result of human intervention in the environment.

Having previously engaged with scientists and explored how photography intersects with other disciplines, for this project, Noble collaborated with scientists from the Queensland Brain Institute to design the hive and its transparent passageway, which allows the bees to navigate from the outside world to their hive inside the Gallery.

Museum: For a time when the bee no longer exists comprises portraits of bees that recall dust covered artefacts from another time, together with a 3-D printed insect, resembling the ghost from the portraits. In addition, the Bruissement photograms are enlargements of images capturing the light around the wings of dead bees – bees that died from pesticide poisoning.

An insect revered historically in myth, religion and literature, as well as in present-day science and industrial research, Noble’s project stimulates awareness of this species whose essential global existence is threatened by pests, chemicals and disease.

Although humankind has compromised this species of pollinators with chemicals and pesticides in the interests of agriculture, bees are, more than ever, the subject of research that is advancing fields such as flight, navigation and communication. Anne Noble’s work engages with this complexity and our multifaceted relationship with the natural world.

Qiu Zhijie’s Map of Technological Ethics depicts a dizzying array of challenges and moral questions facing humanity, as they pertain to scientific and technological development.

Painted directly on to the gallery wall, 18 metres in height and 38 metres long, the map depicts an archipelago of moral quandaries in applied science. Islands and landmarks are named for activists and political lobbies, contentious issues in medicine and biology, and looming fears of technocracy and anthropogenic climate change.

Qiu Zhijie touches on the implications of artificial intelligence and computer technologies, from the impact of automation on labour to the use of facial recognition software in drone warfare. Assigning imagined geographies to a range of expressions of ethical anxiety throughout history and across cultures, Qiu suggests expanded possibilities for established categories of knowledge.

In the sheer scale and breadth of his map, he offers a graphical account of the potential for technology and its conundrums to pervade every aspect of human life.

Watch our time-lapse, recorded over a period of five days

Anne Noble has been supported by Creative New Zealand