This morning, it was my pleasure to be joined at the Galley of Modern Art (GOMA) by Leeanne Enoch, Queensland’s Minister for Innovation, Science and the Digital Economy and Minister for Small Business, for the announcement that Queensland artist Judy Watson has been selected to realise a major public artwork at the building’s entrance.

The Queensland Indigenous Artist Public Art Commission invited expressions for interest from acclaimed artists to propose a public artwork for realisation as part of this year’s GOMA Turns 10 celebrations.

The artwork will make a significant addition to the memorable public works already situated in Brisbane’s Cultural Precinct, and be a potent reminder of the ongoing role that Queensland’s Indigenous artists play in telling their own stories and in the greater cultural life of the state and  country.

The Commission responded directly to community sentiment for more visible representation of Indigenous artists in the Precinct, and addressed the Gallery’s commitment to promoting greater community awareness of Indigenous histories and people. Judy Watson’s work will make a powerful and evocative new addition to the public art of the Cultural Precinct. Based on an everyday object that was an integral tool in the lives of people who fished the banks of Brisbane River and Maiwar Green, it references the land on which it will sit, the traditional owners of the site and the wider region.

Drawing from archival material in the Queensland Museum and State Library of Queensland, the artist has researched and thought deeply about the site to present a vision which immediately speaks to local saltwater waterways and estuaries. It combines the fibre arts that were traditionally a woman’s responsibility, with fishing, typically associated with men. Though the object – known as a ‘tow row’ – is specific to the region, weaving as a technique is also shared by many Aboriginal and Torres Strait Islander people throughout Queensland.

Judy’s proposal extends the mark-making of her painting, printmaking and installation practice by inviting interplay between the open weave of her sculptural form and the moving shadows it will cast across the surrounding GOMA forecourt during the day.

We are delighted that Judy will reinscribe this humble everyday object back into the landscape where it has been used, renewing an inherently traditional and local story and bringing it into our contemporary memory.

In her proposal, the artist wrote:

This use of fibre and water as the conduit for catching fish evokes ideas of sustenance, family, culture, survival. The fragility of the object cloaks its hidden strength, a metaphor for the resilience of Aboriginal people who have held onto the importance of land, culture and family through adversity and deprivation. It will be a lasting memory of the indelible Aboriginal presence that is a part of this shared space.

The Gallery is proud to be advocating for the ongoing role Indigenous people play in the narrative of place, community and culture in contemporary Australia, and this artwork is one step toward visibly honouring that artistic practice, now and into the future. 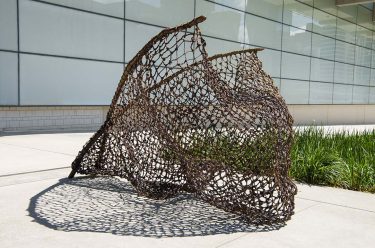 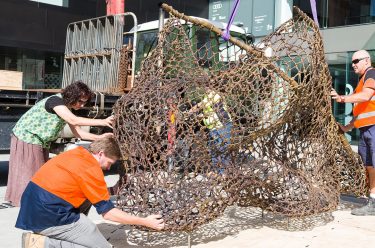