Nicolas Molé is internationally recognised for his work in video, television, animation, drawing and sculpture. Born and educated in France, Molé relocated to New Caledonia in 2010 to connect with his extended family and his Kanak heritage on his father’s side. His ambitious practice engages with this heritage and its contemporary articulation.

Ils vous regardent (They look at you) 2015 was commissioned as part of the Yumi Danis (We Dance) project for ‘The 8th Asia Pacific Triennial of Contemporary Art’ (APT8). Focused on the role of performance in Melanesia, this collaborative project saw Molé working with a diverse group of dancers and musicians from Papua New Guinea, Fiji, Vanuatu, New Caledonia, West Papua and the Solomon Islands to develop a work that contextualised their practice for an international audience.

Watch the Yumi Danis (We Dance) performance at GOMA

Ils vous regardent (They look at you) 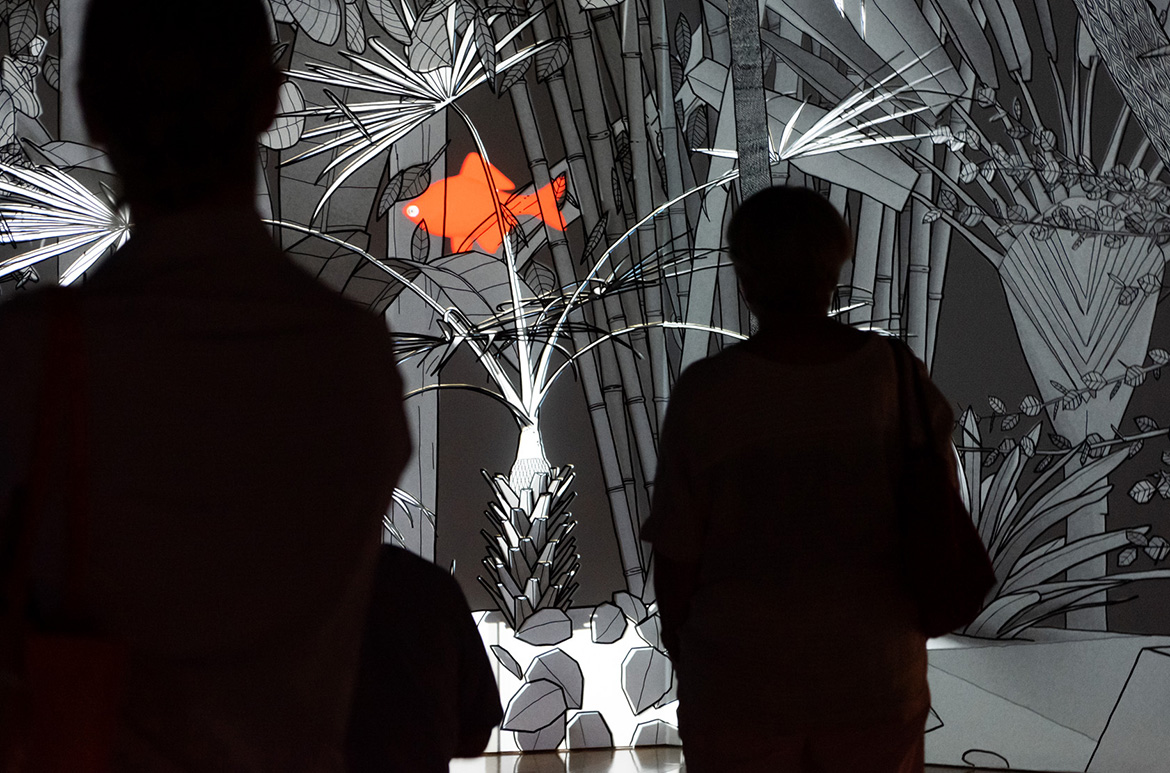 The animated forest environment of Ils vous regardent begins in black and white and, much like the creation story of the Kanak peoples of Lifou, under the sea. A single spotlit, bright orange fish moves slowly in and around the plant forms, circling the installation space. As the fish completes its circuit, light fully illuminates the surrounding landscape revealing a forest of shadowy textured trees.

Four Melanesian figures playfully move in and around this landscape, watching and responding to the audience in the village clearing. The animation culminates with each of the four figures embracing a tree through which the coloured life force of the forest pulses. Eventually the figures merge with the trees, and the whole scene, which is dotted with hundreds of watching eyes, erupts into colour.

The empty space at the centre of the installation represents the clearing found in most Melanesian villages, which is surrounded by verdant forest in which the dynamic forces of life and the spirit world abound. 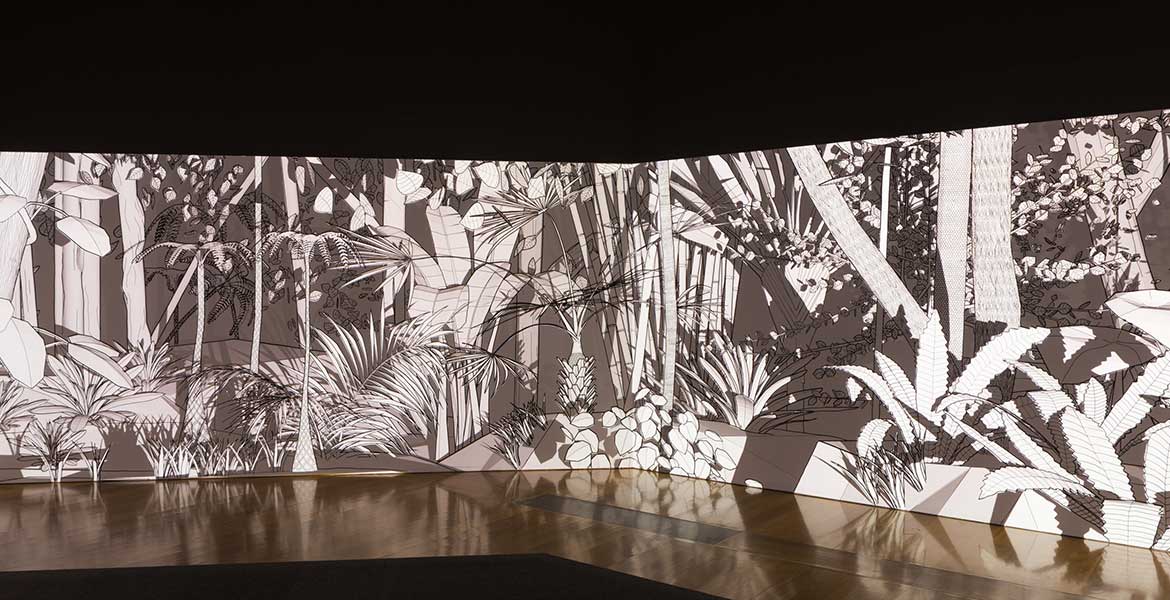 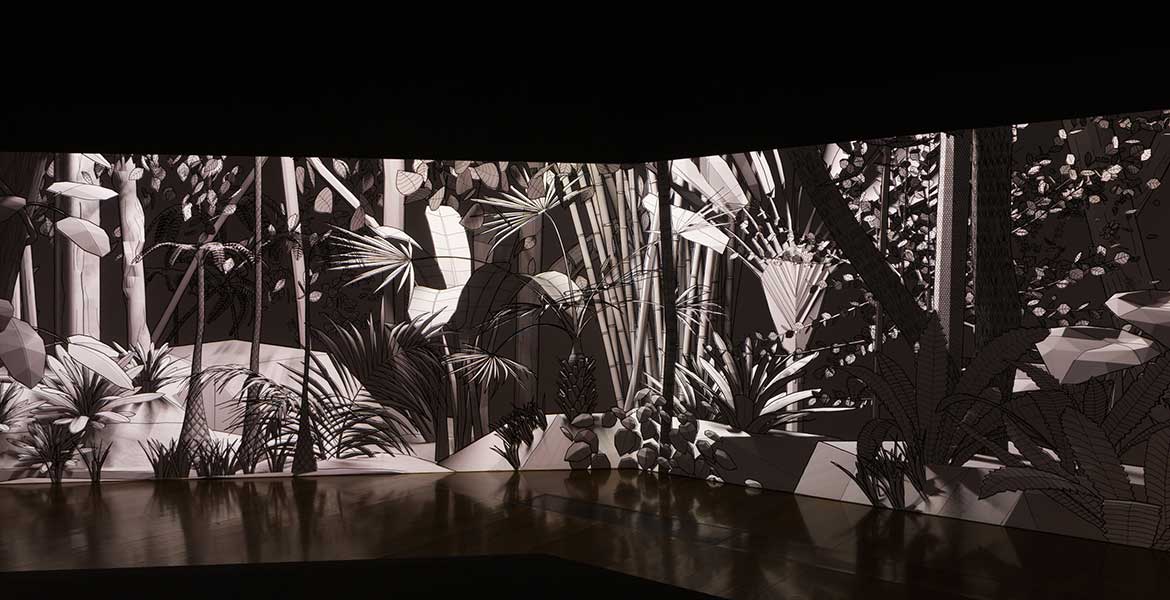 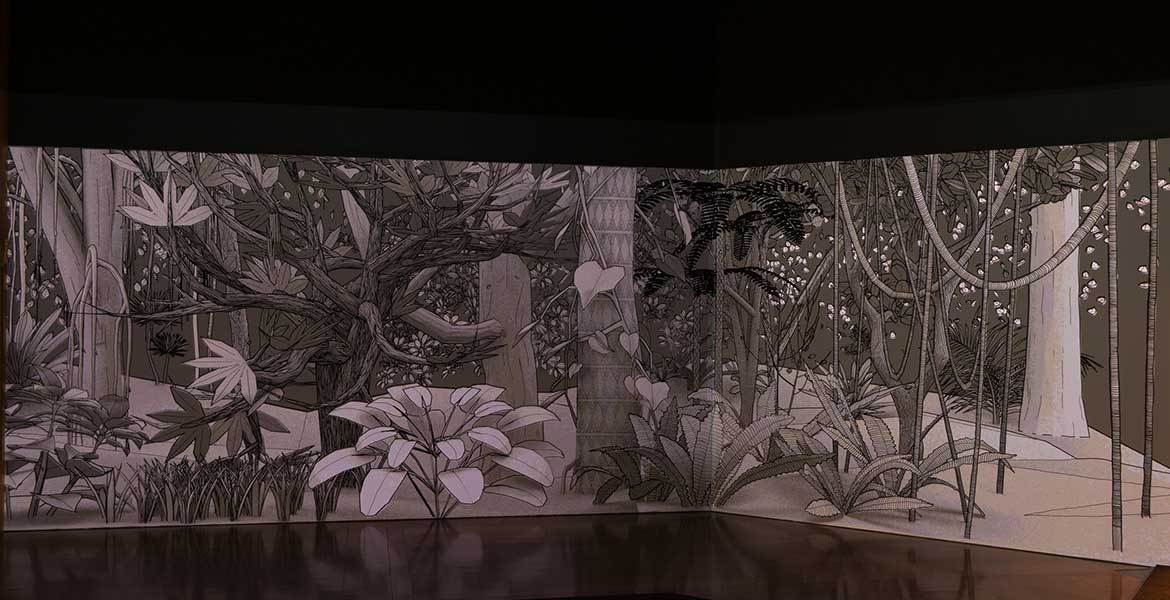 In Kanak culture, trees are used for medicine and magic. Energy flows from them into both the human world and spirit world. Here, Molé engages with this force and the importance of ancestors (represented by the four figures), who are always watching over the living to make sure that we are careful in what we do.

Melanesia is an archipelago of cultures. It is like looking at a forest with lots of different things. You can’t name everything because it is too diverse. But, then after a while you if you sit still, you observe, you try to feel what the people who have been there before you can tell you. What you can’t see. Then you see something that gives sense to all the diversity.2

With Ils vous regardent, Molé engages his audience in an immersive experience that emphasises the importance of the relationship between the living and the ancestral realms. Pausing to engage with this perspective helps us approach the diversity of cultures, languages and customs comprising Melanesia. Using sophisticated technologies, Molé brings to age-old beliefs and customs a new form of expression and life. 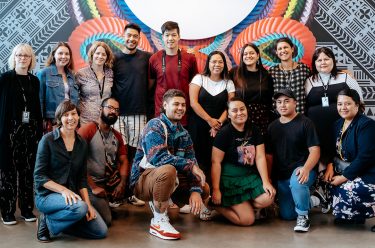