‘Unfinished Business: The Art of Gordon Bennett’ presents the work of an artist deeply engaged with questions of identity, perception and the construction of history. Simon Wright, a long-time friend of the artist, recalls the man in the studio in our two part series, continuing with his purpose-built Samford Valley studio.

Gordon Bennett’s Samford Valley studio, completed in 1994–95, was a 150-square-metre standalone ‘shed’ with covered verandahs. It included climate control, storage racks and other purpose-built features. It was Gordon’s ‘dream scenario’. Visiting the vacant block, I can recall how excited Leanne was as she moved around the house slab and peg markings for the home-to-be, describing rooms and garden layouts. Gordon seemed focused entirely on how big the studio would be, relative to the house, and how far a walk it would be from the pool. When the new working space was complete — apart from the benefit of its vast scale relative to what he had grown used to — Gordon was able to better document finished works, build and store his own collection and focus on a growing interest that would soon shift his studio practice again: how computers could upgrade and replace analogue aspects of his practice.

In 1995, Gordon was awarded a place in the Australian Network for Art and Technology Summer School in Brisbane. It was here that he developed computer skills that would soon influence his practice: not only in ‘painting stills’ but also in animation, video and scanning. Around the time of his next studio residency, as the recipient of the anniversary Creative Arts Fellowship at the Australian National University’s Canberra School of Art in 1996, his entire modus operandi would change. Almost immediately, he moved from incessant pencil-jotting of thoughts in notepads to sourcing, lifting or sketching an image quickly. At odds with his peers, and many well-established or emerging artists at the time, Gordon had fully transitioned to adopt computer technology as a core studio tool, and never looked back. He quickly became highly adept at using Photoshop and other Adobe and Apple production and editing software in support of his aims.

Gordon did not feel bound by technology; in fact, he enjoyed using it as a medium turned back on itself, especially given the strong conceptual linkages to his practice. After all, printing technologies and digital advances are themselves inextricably tied to the ubiquitous visual culture of racism and its trafficking, however intimate or global. Indeed, as Ian McLean has suggested, all of Bennett’s paintings made following his Canberra studio residency — from the 1996 ‘Home décor’ series onwards — were worked up from preliminary Photoshop files.1 Gordon enjoyed the immediacy and convenience of using technology and the time it saved him digging through notes, drawing or redrawing something.

At the Samford Valley studio, Gordon was able to split the space in half, in order to work simultaneously on multiple works in a major series or exhibition. He would hang several works in a long line, playing them off against one another, making or lessening formal connections, going from canvas to canvas with one colour at a time to expedite continuity, or optimise time. While Gordon was always working ‘in his head’, or on a screen, his time spent physically in the studio was used very efficiently and strategically, and was scheduled mostly to accord with the date a truck would arrive to cart works off for a commercial show or exhibition loan. Intense bursts of painting would ensue, including series of all-nighters that could sometimes run for weeks. He simply did not have any interest in sitting around painting to pass the time or exercise a habit; nor was studio time about honing technique or perfecting anatomical or landscape likenesses. 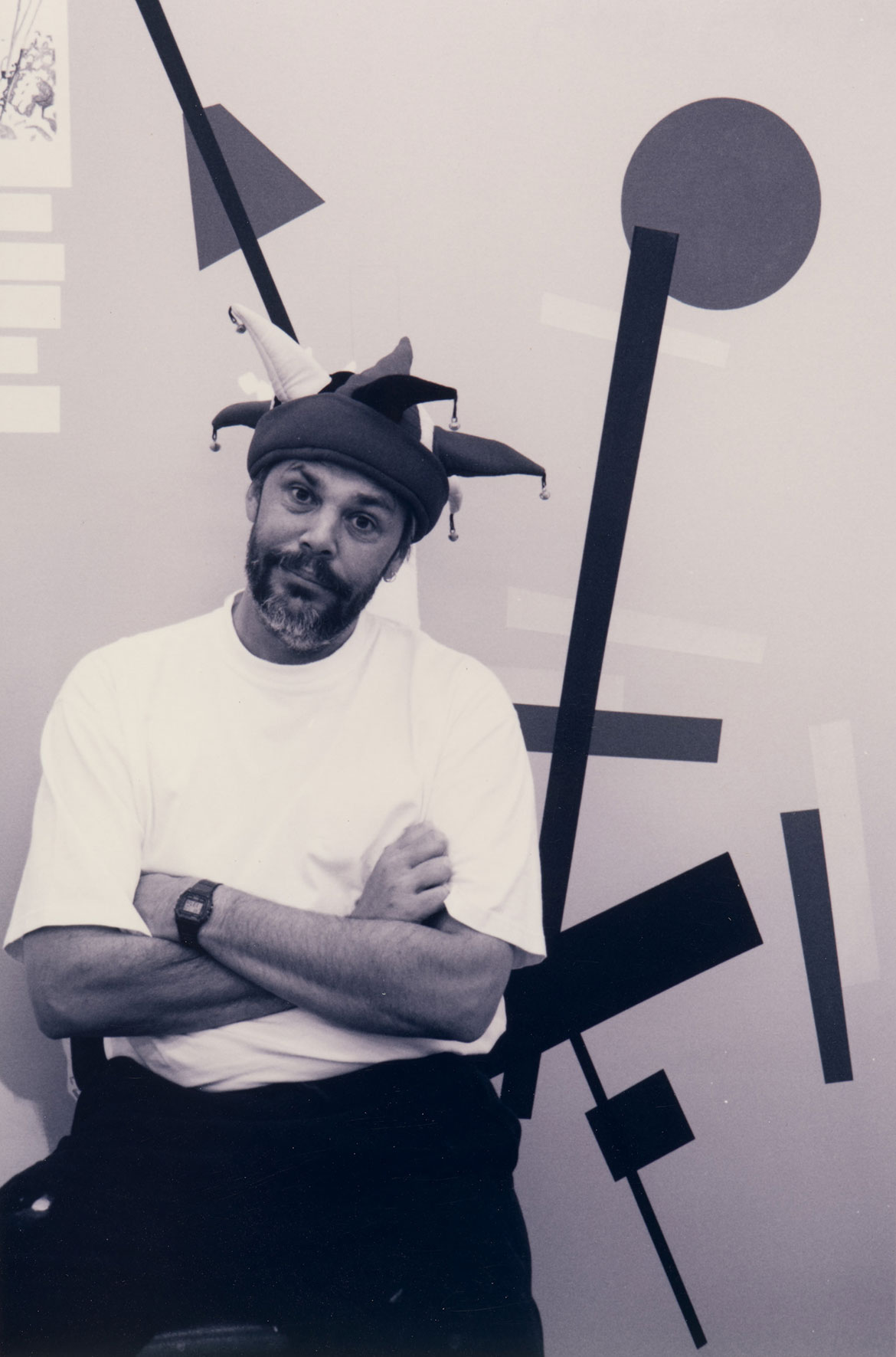 One of my fondest memories of Gordon in the studio relates to a ‘joker’ figure that appears in several series across decades, and a variant of that figure who appears as a jester, with a harlequin hat, or Basquiat-like crown. As with many of the solitary figures in his work, the jester hat refers to Gordon himself, bearing witness, or expressing a universal truth via a very personal, lived experience, as a form of autobiography. While in particular works, such as Home décor (Preston + De Stijl = Citizen) Men with weapons 1997, the joker hat device adds gravitas and solemnity, the hat itself was a prop in his studio. Only in that private studio space would Gordon don it, rarely, to clown around in, as a way to disrupt the weight of the task in front of him. In those moments Gordon would lose self-consciousness, put on a mock rap face or cheeky grin, and once only he allowed me to take a portrait of him. It’s my most precious memory of Gordon in his studio.