While a student at the University of Queensland in Brisbane, William Yang wrote and directed theatre productions and began taking photographs. He started photographing architecture, and then turned his camera to people, which is when he found his true passion.

In order to make a living as a photographer, Yang began his career taking candid shots of ‘beautiful people’ at parties and events for the social pages of newspapers and magazines. Yang rubbed shoulders with celebrities, artists and performers, and discovered that the camera was an entry pass to an exclusive backstage world populated by kindred spirits, with whom he formed close bonds.

Yang’s prolific social portraiture includes some of the most prominent people in Australian theatre, film, art and literature, with more than a few international cameos. A much-loved and trusted figure who is embedded into Sydney’s social fabric, Yang’s images are taken with the razzle-dazzle of celebrity, but little of its conceit.

Within the show is a salon hang ‘social wall’ which long predates Instagram. The selection of faces is reflective of Yang’s friendships and his abiding passion for the arts — they embody both the glamour of celebrity and provide behind-the-scenes insights into the lives of artists from a range of backgrounds. With a camera around his neck, Yang came to understand that he could ask his subjects a series of personal questions, and they would reveal more of themselves than they would during the course of casual conversation.

Representing only a fraction of Yang’s social photography, these images capture the almost compulsive nature of his passion for recording people and places. His gift for eliciting the essence of his subjects through portraiture — whether candid or posed — has been apparent his entire career.

The accompanying publication William Yang: Seeing and Being Seen explores the artist’s prolific practice. The 220-page hardcover monograph features reproductions of over 200 photographs, tracing Yang’s career from his heady early days as a social photographer in the 1970s documenting Sydney’s queer scene, family ties, sexual and cultural identity, and the Australian landscape. It also examines his deep connections to Queensland. / RRP $49.95 / Special limited edition with signed print $300.00 / Available from the QAGOMA Store and online / Limited edition 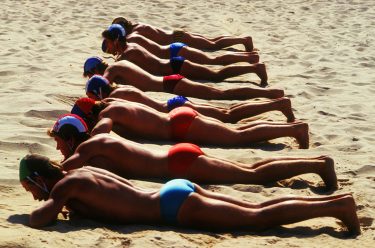