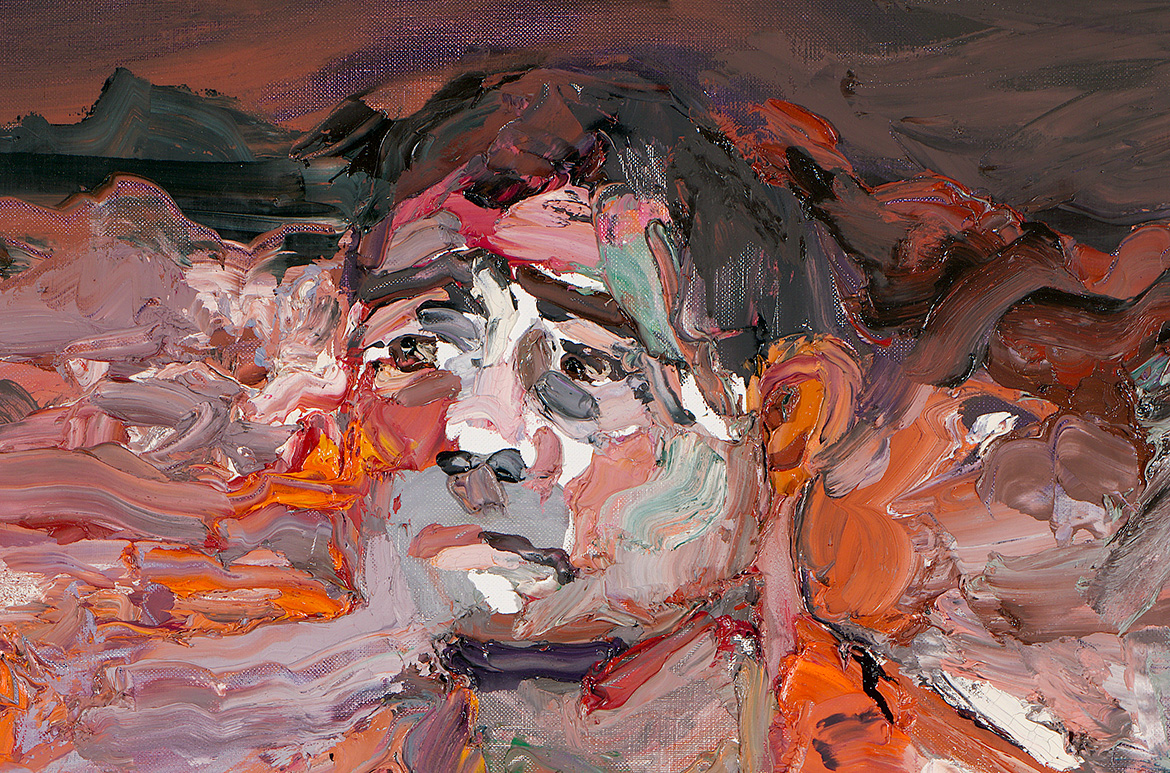 In October 2011, Ben Quilty toured with Australian troops as an official war artist for the Australian War Memorial, part of its scheme to document the experiences of Australians deployed to the frontline in Afghanistan. Quilty’s Sergeant P, after Afghanistan 2012 is a brave attempt to capture the intensity of experience felt by soldiers involved in military conflict, and is one of the most remarkable works to have come out of Quilty’s encounter with Australian military personnel in Afghanistan.

By his own admission, Quilty has from a young age feared the idea of being a participant in war, and was accordingly a committed pacifist. His time in Afghanistan, however, and more specifically his contact with personnel in the context of their duties, has greatly affected his attitude towards the combatants.

The first night we landed [in Afghanistan] two or three rockets landed within the compound of Kandahar. They said to me ‘if it’s a direct hit, it’s coming straight through’. We flew into Tarin Kowt . . . Before I went to Afghanistan, I guess I was anti-war. Most of the soldiers I met are. But the truth is far more complicated and the slogan is a simple one and I feel it does a huge disservice to the young people who are in Afghanistan.1

War reportage is often limited to particulars about campaigns: time, location, protagonists, their methods and casualties. In this way, the impact of military conflict on individuals and communities is often underrepresented — but the experience of such events is a world away from such record-keeping. Sergeant P, after Afghanistan 2012 is a raw image of a burden that is often hidden from view. In painting the psyche of a soldier returned from contemporary service, Quilty offers a strikingly empathetic portrayal of Australians involved in military conflict.

This significant work is an insight into the character and dimension of Australian society and some of its most heroic participants. As Quilty explained, ‘Sergeant P serving in the SAS is a ‘protected identity’, injured in the line of duty, he was flown to Germany and put in an induced coma for six weeks, and stayed in the country for three months before being brought home for further medical support in Australia. Despite his severe injuries, he was determined to stand throughout the painting process.2

Sergeant P, after Afghanistan captures the visceral intensity of the sitter’s raw physicality and resilient psyche. The strained expression and posture of the subject, emphasised by an unusual foreshortening, convey Quilty’s empathetic understanding of the sitter’s mental, physical and emotional burden. In the background, his trademark thick bands of impasto colour are ruptured and tangled together, describing the shadows that the experience continues to cast on the sergeant’s personality and psychological wellbeing.

The ongoing effects of stress, fear, exhaustion and violence — and the spectrum of complications that these experiences provoke — can plague combat survivors and their loved ones all their lives. Ben Quilty’s effort to shed light on these experiences enables the Gallery to convey a powerful and underplayed contemporary war narrative, and make a present-day interjection into a subject that is too frequently referred to in the context of the past.

Delve deeper into the collection

Captain Kate Porter, after Afghanistan 2012 is a caring portrayal of this sitter’s time spent in Afghanistan’s war zone, and a strong acknowledgement of the lasting emotional and psychological impacts of such exposure. As part of the larger ‘After Afghanistan’ series, this work is also emblematic of the wider experience endured by many Australians at war and performing peacekeeping missions.