Cindy Sherman’s conceptual portraits of herself as a series of B-grade film heroines in the ‘Untitled Film Stills’ (1977-80) resulted in her recognition as a key postmodern artist. Since gaining international attention in the 1970s, Sherman has produced an extensive body of photography, and has collaborated with a number of notable magazines and fashion houses.

In 2010, she was approached by POP magazine to create a zine insert. For the project Sherman took up a standing invitation from the fashion house Chanel to use their archive. The images that appeared in POP were then reworked to create the ‘Chanel’ 2010-12 series.

The awkward postures undermine our expectations of seamless glamour and introduce a shabby, thrift-shop strangeness to these images. Reflecting on her choices, Sherman recounts:

I was conscious about the choices I was making with the pieces, to select things that didn’t read ‘fashion’ . . . I was looking for things that had some other kind of quality.

These large-scale artworks feature Sherman masquerading as enigmatic female figures dressed in Chanel haute couture and juxtaposed against striking landscapes. Sherman photographed herself in front of a green screen in her studio, and then digitally layered the figures over images that she took on the Isle of Capri in Italy and others when she was stranded in Iceland during the eruption of the Eyjafjallajökull volcano in 2010. It is clear that Sherman has used Photoshop to manipulate the background, giving it a generic painterly effect, the thickness of the brushstrokes contrasts with ethereal character in Untitled #512 who is standing in the foreground draped in a feathery coat.

The ‘Chanel’ photographs differ from the carefully styled fashion shoots typically found on the pages of a high fashion magazine. Sherman appears to be making a mockery of the fashion world by producing pictures that feature unappealing combinations of expensive clothing. For example in Untitled #540, Sherman stands stiffly wearing an unflattering wig, while dressed in a leather jacket and taffeta skirt designed by Karl Lagerfeld. She is also completely alienated from the work’s desolate backdrop. This awkwardness is mirrored in the other portraits in the series, all of which feature Sherman floating in the foreground in a trance-like state. The unattractive aesthetic of these images is intentional and Sherman has vocalised about her attitude towards the false reality depicted in fashion magazines, and her desire to subvert it by making ‘really ugly pictures’.1 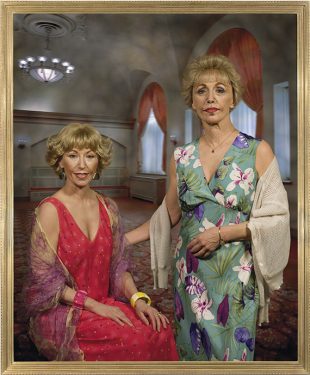