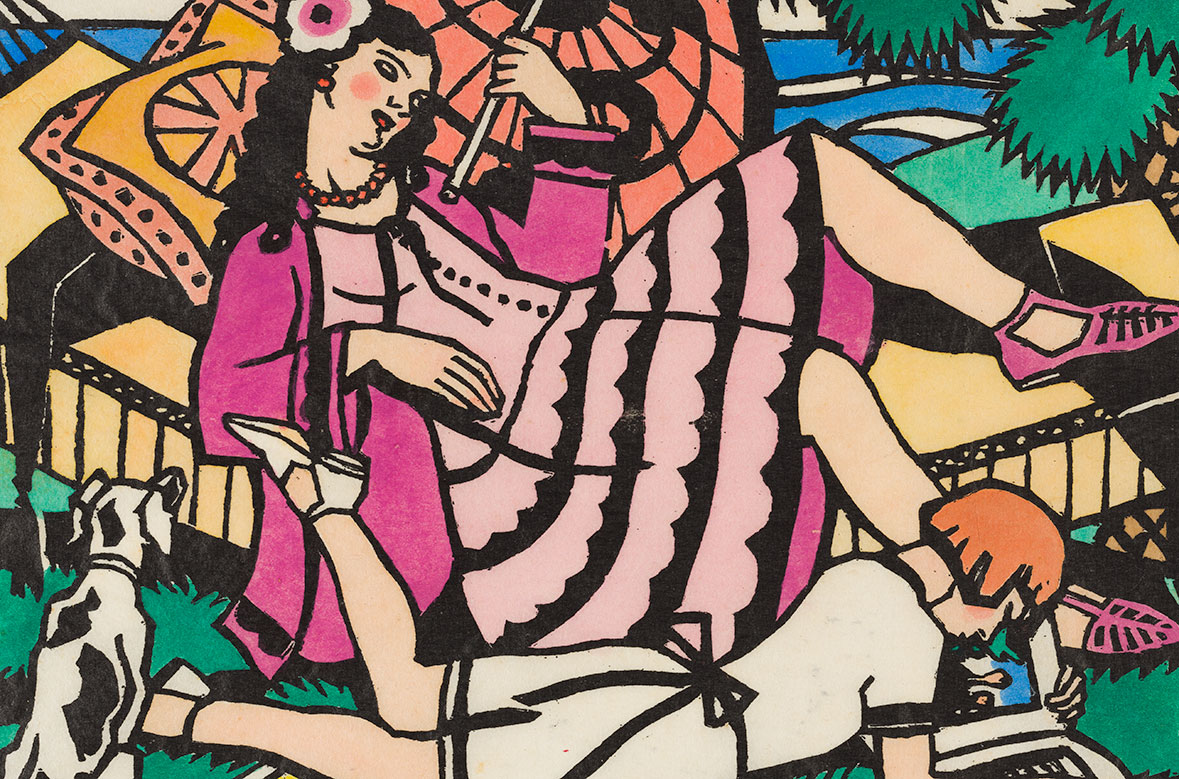 Thea Proctor’s vibrant hand-coloured woodcut Summer, inspired by the tradition of Japanese ukiyo-e prints, brings me joy because it reminds me of life’s simple pleasures (ikigai).

In 1921, having spent much of the past two decades in London, Thea Proctor returned to Australia and settled in Sydney where she became an influential artist and a doyenne of style. Biographer Jan Minchin has noted that Proctor was ‘Frequently described as looking like one of her own pictures … [and] considered the most picturesque hostess in Sydney.’1 Even before Proctor’s arrival, the publisher Sydney Ure Smith had commissioned her to produce covers for his new magazine The Home. Her sophisticated designs and articles on art, fashion and interior decorating would make the publication essential reading.

RELATED: Portrait group (The mother) 1907 is one of a series of works that feature George Lambert’s friend and colleague Thea Proctor.

Proctor was a passionate advocate for modern art, a tireless campaigner for women artists, and a devotee of fellow Sydneysider and leading contemporary artist Margaret Preston. In the early 1920s, Preston had begun to make woodcuts inspired by Japanese ukiyo-e prints, an art form that flourished in Edo period Japan (1600–1868) and featured ephemeral scenes from everyday life, or ‘pictures of the floating world’.2 Preston saw in these works the simplification of colour and form to which many modern artists aspired, and encouraged Proctor and others to explore the technique.

Summer 1930 is one of only 13 woodcuts Proctor is known to have made, and displays the bold lines and vibrant colours characteristic of her work in the medium.3 Her love of design is well illustrated here – elements like the Dalmatian, the patterned pillow and the scalloping on the dress of the girl in the hammock have been included for their dazzling effect.

Although the print’s decorative qualities are one of its most appealing features, the work is more than simply an eye-catching arrangement. It provides an insight into the period in which Proctor lived, and the urbane circles in which she moved. Her dual interests in art and couture are conveyed through the figure of the girl browsing through the magazines of modern art and her chic companion, parasol in hand. It is through the considered placement of these accoutrements that Proctor is able to communicate, with great economy of style, those things she valued most.

As her relative Thea Waddell later recollected about another work by Proctor in the Gallery’s Collection, Still life and interior, ‘All her pre-occupations are there – the fans … which she loved, umbrellas or parasols used most elegantly to keep off the sun … books on art to be shared and read.’4

Summer relates to two other woodcuts by Proctor held by the Gallery, including The swing 1925 and Women with fans 1930. In each instance, the artist has constructed a tableau in which her characters act out their roles as members of the leisured classes, and form picturesque elements in a carefully orchestrated composition.

In Women with fans, the posed stillness of the figures is juxtaposed against the busy harbour behind them, creating a visual tension that is typical of Proctor’s prints. The interior depicted is likely to be her home in Double Bay, while the models are her friends and fellow printmakers, Ethel Spowers and Eveline Syme.5 Their stylish attire and hairstyles reflect the fashions of the day, and are indicative of Proctor’s interest in costume. The striking floral dress worn by Spowers references the outfits designed for the dancers of the Ballet Russes, who Proctor had seen perform in 1911, and of which she said ‘it would be difficult to imagine anything more beautiful and inspiring’.6

Each of these scenes appear as moments frozen in time, yet they retain a strong sense of dynamism. In Summer Proctor has achieved this effect by contrasting the languid poses of the young women with the bright hues and rhythmic lines that surround them. The raised leg of the girl reading serves as a striking counterpoint to those of her companion, which dangle from the hammock in which she lies, their opposing figures forming a whorl of colour that arrests the eye.